Notes :
(1) 49173 failed at Edge Hill with a cracked cylinder.
(2) 49224 with 49434 on rear.
(3) 49434 with 49224 on rear.
(4) 49434 & 49224 but in what combination? The tour timing sheet would seem to suggest the top-n-tail running was booked to have been between Canada Dock and the reversal at Bottle Jn however it has also been given that 49224 was involved between 'Canada Dock via Altcar to at least Garston Dock, to assist with reversals' it being photographed at Alexandra Docks Station, Altcar & Garston Dock. Other photographic evidence does seem to suggest the locos were top-n-tail at Altcar & Hillhouse and Garston Dock, though another photo at the former location shows 49434 apparently in the act of running round.
(5) Timing sheet refers to this as a propelling move however if 49224 was involved top-n-tail with 49434 throughout from Canada Dock to (at least) Garston Dock then presumably the propelling move was not needed.
(6) Advertised as the last train on the Aintree Central - Altcar & Hillhouse, Southport &  Cheschire Lines Ext. Railway. 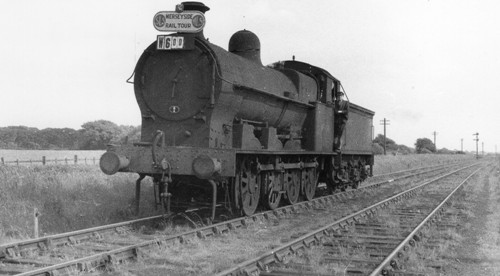 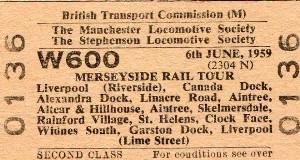 From the John Debens ticket collection.