Notes :
(1) At Thorpe Arch the train was booked to traverse the Thorpe Arch Circular Railway (Ministry of Supply Royal Ordnance Factory, Thorpe Arch). This line carried workmen's passenger trains only and was due for closure soon after this tour.
(2) For works visit. Originally advertised to run into the works yard this was amended to be the station before the tickets were issued to passengers.
(3) This tour was originally advertised to also traverse the Dewsbury Market Place branch but was withdrawn from the itinerary prior to the tickets being issued as it had been 'refused' by the North Eastern Region planners.
(4) Route confirmation required - above is from booked timings. Reporting code originally uploaded as C810 but Howard Cook says photographic evidence at Skipton as well as Harrogate & Barnsley Court House clearly showed it as C819. 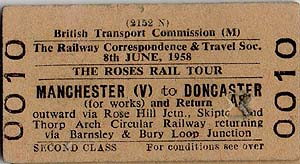