Notes :
(1) The tour timing sheet carried the statement 'Change trains at Kentish Town and Farringdon Street. The two changes of stock are regretted but British Railways state that this is necessary if we are to pass through the tunnels between Kentish Town and Farringdon Street'.
(2) It was originally advertised that the tour would traverse the Beckton branch but this was dropped prior to the tour running 'owing to restrictions on the use of the Metropolitan widened lines after 4pm'. To compensate for the omission the train (after passing through Kensington Olympia late in the day) was to be routed via North Acton and the Greenford loop rather than the more direct routing via Old Oak Common East.
(3) Route confirmation required - above is per the booked timings. 69462 photographed at Southall and Farringdon. Other photos in the North Woolwich area show an L1 2-6-4T was in charge at that stage; the use of 67735 has been confirmed by Christopher Horne. The timing sheet for this tour confirmed it to be the SRC's third rail tour and the first into the 'steam hauled' field, the previous two being made by diesel railcar. 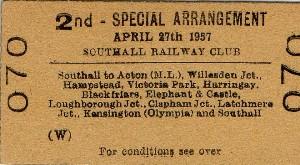