Notes :
(1) Route & loco confirmation required - above is from booked timings. As originally uploaded the use of 68628 was given as 'visited Maldon East & Maldon West' and 65443 was given as having been used from Kelvedon to Tudwick Road Siding (and return). The tour timing sheet however carried the following comment; 'Please note that the train will NOT proceed beyond Tiptree, as originally announced, due to a railway ruling by the Ministry of Transport'. As Tudwick Road Siding was the then end of line in 1957 and beyond Tiptree station, from the statement in the timing sheet it would suggest the train in the event reversed at Tiptree station and not Tudwick Road Siding (unless the official ruling was ignored on the day...?).
(2) The tour timing sheet commented; 'open wagons will be used between Kelvedon and Tiptree, and it is hoped that ladders will be available'. No mention is made of what stock was to be used for the remainder of the tour however the timing sheet also had the following comment; 'Refreshments will be on sale on the train (in the brake van) between Witham and Kelvedon, and after return from Tiptree, throughout the remainder of the tour'. Edwin Wilmshurst's covering letter (with timings) has a number written in pen - E82450 (or possibly E62450) - was this the brake van or one of the wagons used?
(3) Depending on what run-round facilities existed at the two Maldon stations it is possible either the run to from Maldon East to Maldon West, or the return leg, was a loco propelling move? 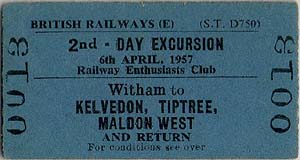