Notes :
(1) Originally uploaded as having run on 6th February in error. BLS records did show that this tour was originally planned to run earlier in the year, but the date for that is not mentioned. In the event this date was chosen and another planned tour for this same date, 'The Fenlander', was cancelled.
(2) For visit to Easingwold Railway.
(3) Route & loco confirmation required - seen at numerous locations hauled by 62387 (Andrew Fairholm suggests 62387 was used throughout, except as above on the Easingwold Railway). 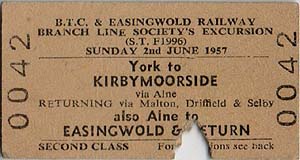