Notes :
(1) Nigel Benning comments: It was planned before the day that D9009 would come off the train at Landor Street. This was believed to be due to drivers hours and the need for the loco to get to Bescot for subsequent movement to London in time for a tour the following Tuesday. The only issues on the day was that one power unit shut down occasionally, believed to be due to a faulty high temperature probe. The stop in the platform at Frome on the way back was to allow this power unit to be restarted and I believe this explains the stop at Taunton on the outward trip. I also believe the extended stop at Cheltenham Spa on the return was because the train had to pull forward to allow a wheelchair passenger in the rear coach to alight. 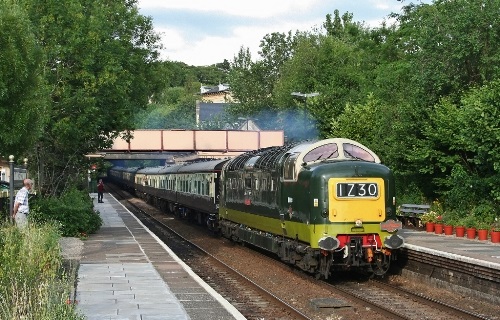 D9009 passing through Bradford-on-Avon on the return (photo: Guy Vincent)

Source : Nigel Benning (on the tour throughout) & Guy Vincent