Notes :
(1) 17096 was only in the consist when 35028 was on the train.
(2) Banked by 67014 from London Victoria to Grosvenor Bridge.
(3) John Clifford comments: This tour was run to get 35028 'Clan Line' to Crewe for its overhaul. On the outward run the water stop shown as Chilvers Coton was made by Bermuda Park Industrial Estate. On the return leg we were booked to run on the Up Fast line from Basford Hall Jn but as the 16.00 Glasgow Central - Euston was running late we stayed on the Up Slow line. There was a track circuit failure at Whitehouse Jn which delayed the train. By not stopping at Rugby and being diverted via Weedon instead of running via Northampton we picked all the lost time and more. Despite a 3 minute stop outside Euston we reached there 9 minutes early. 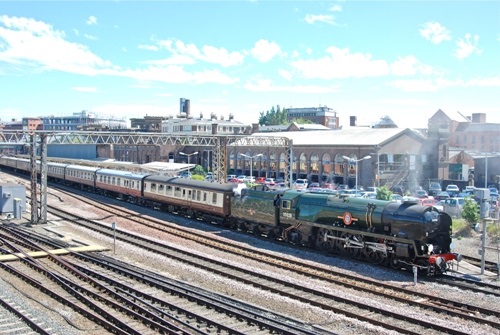