Notes :
(1) Running numbered/named as D1041 'Western Prince' on one side only.
(2) John Clifford comments: When this tour was first advertised the route was to be outwards via Reading (same as the actual return), then via Maidstone East to Canterbury West. The return was to be via Deal, Orpington, Clapham Junction and Kensington Olympia to the Great Western main line then as shown back to Tame Bridge Parkway.  The re-routing on the outward journey was caused by engineering works at Reading, with no capacity for the tour. Oxford and Didcot passengers were taken by coach to Haddenham & Thame Parkway, while Reading passengers were given a ticket to travel by First Great Western train to Ealing Broadway. On the day a defective coach (3386, slipped tyres?) had to be removed from the train at Leamington Spa, thus causing a substantial delay. The return journey was put back an hour to allow some time in Canterbury. As an aside, I was originally due to join and leave the train at Reading. I never saw Reading! 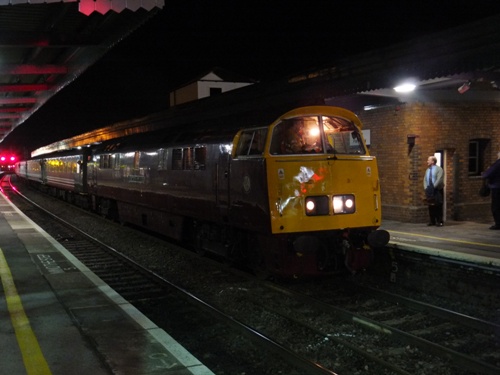 D1015 on arrival back into Didcot Parkway (photo: Gareth Kelly)