Notes:
(1) A joint venture between The Branch Line Society and First Transpennine Express with proceeds going to The Railway Children Charity.
(2) Although the ECS from Ardwick Depot changed from 5Z50 to 1Z50 at Manchester Piccadilly, the section from Piccadilly to Oxford Road was ran for crew only & the 'Tour' started properly at Oxford Road with the mileage also starting from there.
(3) The DGL at Oxenhope was omitted due to a points failure at the North end of the loop.
(4) The return journey from Glasgow Central to Manchester Piccadilly was arranged to be a non-stop speed run to set a time for the journey. The result as recorded by the Railway Performance Society was 2 Hours 45 Minutes 57 Seconds for the 229 Miles 2 Chains, an average of 83 Mph. 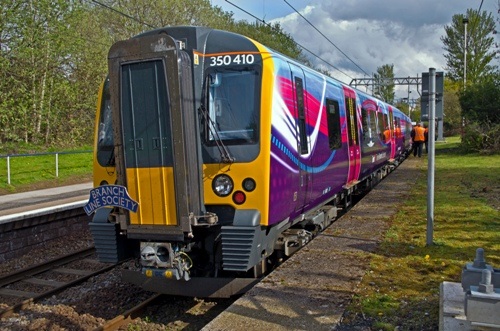 Newly-vinyled TPE Class 350/4 350410 stands in the headshunt at Corkerhill
CSMD, the former second platform on the Paisley Canal line, with 1Z51 from
Craigentinny T&RSMD to Glasgow Central, and is about to reverse back
through the depot cleaning shed.
(photo: Geoff Plumb; taken with permission and under supervision)