Notes :
(1) John Clifford comments: This train started off well & despite being held at Westbury for a unit to pass we were making up time. Then disaster struck; an AWS application on Filton bank brought the train to a stand by the remains of Horfield platform. Despite a numbers of attempts the train would not restart so help in the form of 47500 came from Bristol Parkway (having been involved in the Steam Dreams 'Cathedrals Express' railtour), attached to the front & double-headed the train to Cardiff. By this time we were nearly an hour & three quarters late so it was hoped that we could leave an hour later. Network Rail would not agree to this but, in the event, the turning move for 34067 took longer than expected. The engine had been due to go to Cogan & reverse on the Penarth branch but a unit failure on the branch meant that it had to go to Cadoxton. All this meant that 34067 did not arrive back at Cardiff till 16.13 & the waited there till 16.33 before it gained access to Canton depot for servicing. We finally left Cardiff at 18.30 (two & a quarter hours late). Time was made up but other checks made sure that any gains were lost. I got off at Southampton Central where the train was still the same amount late. 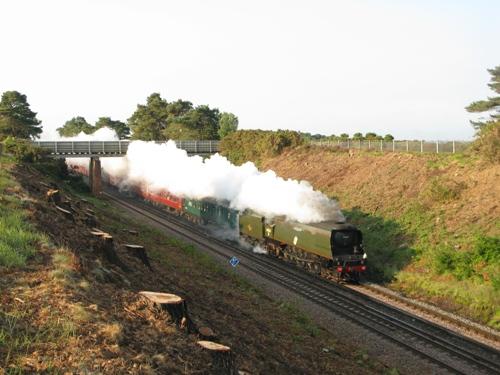