Notes :
(1) 47787 on rear. Due to severe wheel flats the 47 was removed at Heaton depot during the tour layover at Newcastle.
(2) From York via Newcastle back to York ran under the tour name 'The Geordie Growler' with separate ticketing (discounted if booked with main tour).
(3) Route was advertised originally as: York - (via ECML) - Longlands Jn - Northallerton East Jn - Eaglescliffe - Norton South Jn - Norton West Jn - Tursdale Jn (via ECML) - Newcastle.
(4) Train was delayed on the approach to Birmingham New Street due to fighting on the station. 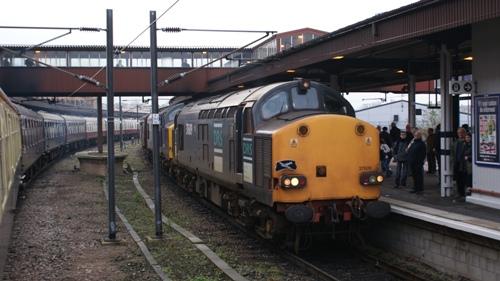 Sources : Dave Ross (on the train throughout) & Gary Thornton