Notes :
(1) 66844 on rear.
(2) 31190 on rear.
(3) Matthew Cole comments:  The tour was booked to run into Orient Way Siding(s), unfortunately 'Buffer-Puffer 7.0' had problems being signalled into Orient Way Sidings. Pathfinder Tours made various phone calls to no avail. This may have been down to lost paperwork or shortage of staff; this in turn was causing delay to the tour and was reversed in Temple Mills Loop. Alan Sheppard adds: Pathfinder did mention that they were going to see if it was possible to visit while in the area on the following days tour, (next to Lea Interchange), as it turned out, we did neither.
(4) Train stopped at Ilford for a few minutes whilst the route was reset. The train was signalled Up Fast vice Up Avoiding Line.

Source : Matthew Cole (on the train throughout) 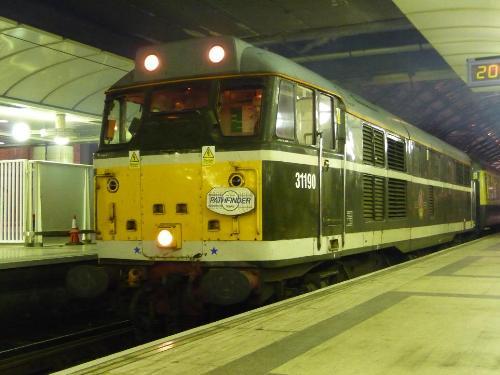 31190 at Liverpool Street, at the start of the tour (photo: Alan Sheppard)

Well, what can I say? What an interesting tour Buffer-Puffer 7.0 was, despite some of the minor problems there was involved. I have to say this is the first time in my entire life; I have spent time traversing on a train overnight, let alone a railtour. Starting at London Liverpool Street, having departed more or less a minute or so late, we headed out onto the GEML to Stratford before running round to the Temple Mills area for reversal at Orient Way Siding(s). It wasn’t long before something had to go wrong. We never got to reverse in Orient Way Sidings… Whatever the issue was over that was never discovered, but thoughts were down to be missing paperwork / no available shunter etc… which resulted in the train being reversed on the Temple Mills Loop and of course, the tour obtaining a delay of around 15-20 minutes. Time was however made up on the fast lines to Shenfield with a 7 minute late arrival at Colchester Town… By the time we departed Colchester for the 3rd leg, we were only 1½ minutes down… Although it wasn’t long before the delay minutes started building up again and for most of the tour right back into London we were running between 10 and 30 minutes late.

Anyway on another note, we covered all the branch lines from Stratford right up to Colchester/Colchester Town, something, I  had done four years earlier when I was working as a railwayman (although I had covered a lot further - all the way to Norwich and Great Yarmouth on local trains). Reversals included Colchester Town as mentioned, Sudbury, Marks Tey, and Southend Victoria. On route back on the GEML from Southend Victoria, various people on board staff were discussing the line Upminster as to whether or not we were likely or not to get the chance to get the line in before the first passenger train service starts. Well we managed to get the chance but only just… by just only about 10-15 minutes to spare. Anyway… back to Stratford via the GEML, then across The NLL to Kilburn Up and Down Goods Loop where we reversed for London Euston where we ended up for breakfast… and before we knew it, we were back on the same train for Buffer-Puffer 8.0 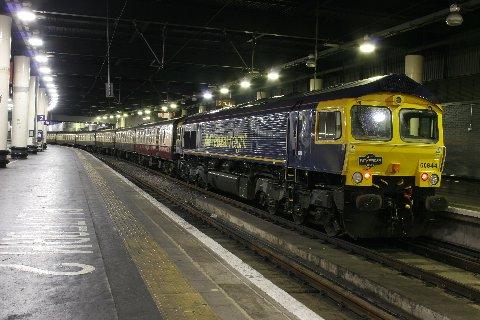