Notes :
(1) For Depot/Control Room Visit.
(2) Due to over-running engineering works at East Croydon, the centre platform was not accessible to/from the Wimbledon direction, but the tour had to start & finish in the centre road to make it easier to ensure 'normal' passengers didn't try to board. On the way back from Wimbledon, the tram was booked to reverse at Sandilands & return to East Croydon's centre platform, but a request to one of the Operators, about the possibility of reversing on a different crossover to that used earlier in the trip, was met favourably. 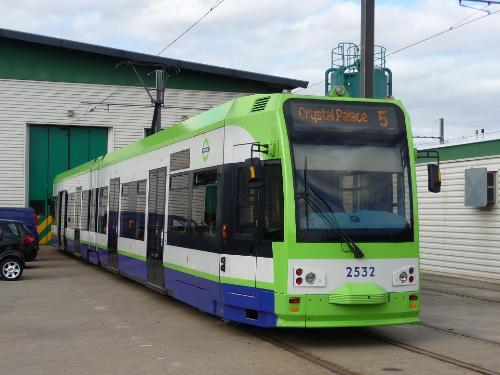 The tram displayed 'Special' for the tour, but in the depot it was changed
for a short period to read 'Crystal Palace' - a future extension of the system
(photo: Alan Sheppard)