We joined the special train at Stafford where there was an unexpected layover until departure at 08.21. This provided an opportunity to photograph 66152 in DB livery. 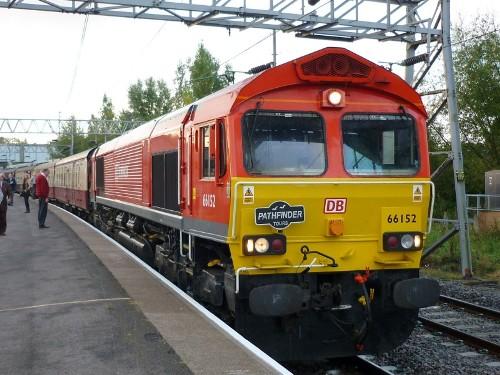 66152 during the pause at Stafford (photo: Gordon Jakes)

Arrival at Crewe was on time and there was much excitement as 6233 was gently simmering in the Up and Down Loop at the north end of the station. 6233 was working a Railway Touring Company special train from Crewe to Carlisle and whilst we were standing in platform 11 its train duly arrived from the south in platform 12 hauled by the preserved class 86 loco number 86259 'Les Ross'. There was much frantic effort amongst the photographers at the north end of platforms 11 and 12 attempting to get a photo of 66152, 6233 and 86259 together in one shot.

Amongst this confusion our train left Crewe some 6 minutes late and proceeded to the Down Slow line. Despite a signal stop on the approach to Winsford South Junction to enable a Preston bound Voyager to overtake us on the Down Fast we arrived at Warrington a respectable 4 minutes late. The journey northwards progressed with little to note albeit that we were signal checked from the approach to Balshaw Lane through to our right turn at Farington Junction.

Blackburn was reached on time and we joined the Daisyfield to Hellifield line without incident. Indeed time was gained against our schedule throughout this line such that and despite a 3 minute stop outside Hellifield we reached the Down Goods Loop in Hellifield station some six minutes early. At this point 66152 plus generator coach were detached whilst 60163 plus support coach were attached. Unfortunately, with no platform access, the only evidence we had on the train of 60163’s presence was smoke, steam and the occasional whistle. However this was soon put right!

Departure from Hellifield was impressive and speed was soon built up. Our erstwhile DB loco 66152 was passed whilst it stood stationary on the Carnforth line just west of Settle Junction (a photographic stop for the crew?). For an unexplained reason 60163 slowed on the approach to Settle station and as a consequence started the ascent of the Long Drag from an excessively slow speed. This turned out to be of no consequence and Ribblehead and Blea Moor Tunnel were reached in fine form. Once over the first summit and clear of the Tunnel the train was brought to an unexpected stop. Yellow jackets descended from the support coach to make an inspection of the front end of the loco. The results were obviously positive as the train was underway again in a matter of minutes and the planned stop at Appleby was reached on time following some more sprightly running. [Chris Cole adds: The unexpected stop was due to the loco slipping earlier in Taitlands tunnel - the crew wanted to check the loco, but obviously did not want to stop during the climb up the Long Drag, so waited until the train was over the summit.]

Appleby was the first opportunity for those on the train to get near to and to admire 60163. Accordingly the best part of the 500 or so passengers descended onto the platform to join the local populace etc. Rush-hour conditions prevailed for an all too brief 10-15 minutes before everyone climbed back on board the train for the descent down into Carlisle.

The Railway Touring Club special train hauled by 6233 had already reached Carlisle by the time that 60163 arrived. A goodly number of passengers from that train plus the local enthusiasts photographed 60163’s entry into Carlisle and these were soon joined by passengers off the Cumbrian Mountain Tornado. I have never seen Carlisle so busy and just to add to the chaos ECML train diversions were operating through Carlisle due to a blockage of the ECML between Newcastle and Edinburgh. 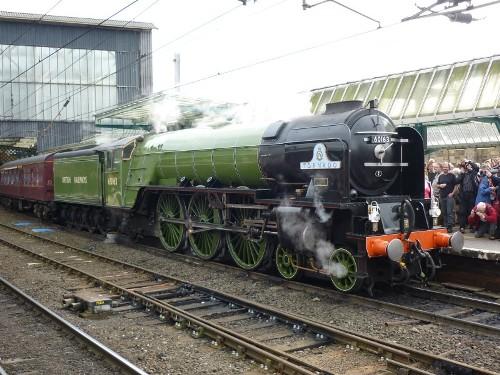 During the layover in Carlisle the southwards departure of 6233 took place at 16.12hrs and this also became a well photographed event.

The empty coaching stock was hauled into platform 3 by 66117 from the direction of London Road Junction. (The coaches were turned ready for the change from Support coach to Generator Coach at Preston). 60163 arrived along the down main from the Upperby direction propelling her support coach. She was coupled to the train in the same formation as the outward journey and duly departed from Carlisle at 17.12 at the booked time. The journey to Preston was achieved in just over the allocated time but not quite in the manner of the plan. The first problem was encountered between Penrith and Shap summit whilst 60163 was climbing at a respectable 56/57mph. Due to oil on the rail surface 60163 experienced a significant wheel slip and speed was unavoidably lost while the slip was rectified. Previous experienced suggested that the oil was from rail lubricators which had been activated by a preceding freight train.

Ironically the freight train involved had passed through Carlisle some 30 minutes before our departure. We then passed it in turn whilst it was recessed in the Up and Down Goods loop at Tebay (66422 at the head of the Tesco liner train). The slow speed maneuvering of 66422 and its train across the Down Main and into the loop at Tebay caused our train to experience adverse signals on the descent of Shap and the need therefore for a severe brake application by our driver on the down grade.

The booked operational stop at Oxenholme, not surprisingly, turned out to be in the Up Goods Loop. Almost as we came to a stop we were passed by a class 185 unit on the 16.11 service from Edinburgh to Manchester Airport. Our slightly late arrival in Oxenholme loop had obviously delayed the 185 service but even had we been on time the 185 would have been no more than 3 minutes behind us. Such are the problems of forcing extra paths on the WCML these days! Our sojourn in the Up loop should have seen the 16.40 service from Glasgow Central (Pendolino) also pass us but this was obviously running late and we were allowed out of the loop some 7 minutes before our booked time.

This was not to be the end of the story, however, and after some more sprightly downhill running we were signal checked on the approach to Carnforth North Junction. After a very slow approach we were turned into the Up Passenger Loop at Carnforth to be passed in quick succession by the 16.40 service from Glasgow Central (see above) and the 16.52 service from Edinburgh to Birmingham New Street (Voyager). In the case of the latter service we should have reached Preston in advance of same – it had been considered that this train would provide an hour earlier arrival in Stafford had the connection worked!

Prior to arrival at Preston we were warned that the intention was to try to better the specified departure time of 20.23. Accordingly departure from Preston was achieved some 10 minutes early but unfortunately due to being pathed Slow line to Balshaw Lane and with significant signal checks approaching Balshaw Lane, Wigan, Weaver Junction and Crewe all the advantage was lost. Arrival at Crewe was on time but departure was a couple of minutes down as was arrival at Stafford.

In summary the day was excellent and it is clear that 60163 is an excellent engine with plenty of power when required. It was my first trip behind 60163 but we will meet again particularly since I was fortunate enough to win the first prize in the on-train raffle!