Notes :
(1) Originally booked for 46115 'Scots Guardsman' but later changed to 45231 due to gauging issues on the Oldham Loop. Three separate ticketing options were available, or one ticket was available to enable travel on all three sections (Witch Way/Cotton Mill Loop Circuit, Oldham Loop Circuit and Oldham Loop Diesel Mini-Tour)
(2) Chris Totty comments: I was only on board for the steam section round the Oldham Loop - Man Victoria - Castleton - Oldham - Man Victoria. Great piece of driving! We left Manchester Victoria on the Down Rochdale Slow line and were due to be overtaken by the 18:21 Manchester Victoria - Leeds before Miles Platting Jn. This train must have left a few minutes late and we were brought almost to a standstill at Miles Platting. The driver kept us crawling along until he got the road and then really let 'The Sherwood Forester' have its head!!
(3) Confirmation of headcodes (and where changed) is required - Chris Totty submitted: 1Z29 when 45231 was hauling, no 1Z30, and 1Z31 when 37706 was in charge.
(4) Confirmation is required of the vehicle order (as uploaded may not be correct). 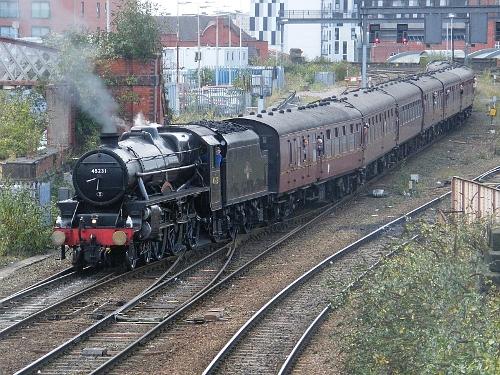