Notes :
(1) 59203 on rear.
(2) 92026 on rear.
(3) Booked route was: Ladywell Jn - Catford Bridge - New Beckenham - Beckenham Junction - Shortlands - Bickley Jn - St Mary Cray Jn however the train was diverted as the driver did not have route knowledge over the booked route.
(4) It was not possible for the class 92 to lead over the North London line because the AC-electrified single track was blocked due to the East London Line works and the DC third rail power was insufficient for a Class 92.

When this tour was first advertised my father and I were unable to book due to my parents being away in Switzerland at the time of the tour. Unfortunately, due to a member of family being seriously ill in Hospital my mum and dad cancelled the holiday. Unfortunately, the member of the family passed away a few weeks ago and due to the change in circumstances we were able to attend.

So what made this railtour attractive?

* Class 59 and Class 92 Motive Power
* Covering Dollands Moor Yard, Wembley Yard, Temple Mills Loop and other bits and pieces not normally used by regular passenger trains
* A visit to Harwich Parkeston Quay from the Ipswich end for which I had not done for 20 years or more.

Friday evening saw me travel up to Leeds where my parents picked me up (after spending a few days at my sisters house) and took us over to Scunthorpe for a fish and chip supper.

Saturday morning (OK 0410am – a time I hadn’t seen for a while!) saw my dad and I drive down to Cockfosters (Me driving, my dad passenger) but were slightly deviated away from the A1 just south of Peterborough when a road sign announced “A1 shut south of A14”.  Panic !!!!!  The diversion wasn’t too bad and saw us back on A1 with the junction for Bedford / Milton Keynes (A428).

We arrived Cockfosters at 0710, and was in to Finsbury Park just after 0740 where we took 313031 down to London Kings Cross before wandering over to St Pancras and then down to Victoria for a spot of breakfast before heading to Clapham Junction on 0847 Victoria to Ore (377119 / 377107).  One of our travelling party on the tour made himself known to us by knocking on the windows of the 377 (after spending the night on the FGW sleeper from Penzance with a number of revellers causing a sleepless night!) also and then spent a good 40 minutes spotting from Clapham Junction.  Another of our party had flown in from Uganda that morning and by the evening was slightly tired!

378005 came in to P2 and then 59203 rolled up on P3 (and not the booked P4 which everyone was expecting).  We boarded and found our seats amongst our party, but sat on the table next to me was a guy who I used to deal with (who works for Network Rail) all the time whilst I was at EWS.  We departed to Longhedge Jn, Factory Jn (AL), Crofton Road Jn and Nunhead and then across to Lewisham.  At Lewisham the first (of only two) problems occurred.  The train came to a grinding halt.  When we did start off we didn’t go down towards Ladywell as planned but continued on the main line towards Hither Green!  The driver incredulously didn’t sign the route to Ladywell / New Beckenham / Beckenham Jn. Anyway we carried on regardless towards Ashford by way of Grove Park, Chislehurst Reversible Loop, St Mary Cray Jn, Swanley, Maidstone East and passed through Ashford on the DF at 11/15 passing 395024 / 395027 on the EMU depot.

Back in my former EWS Days (Sorry DBS as it is now) I actually visited Dollands Moor Yard with a colleague of mine.  And found the yard interesting whilst walking through there at midnight walking with the security guys checking the freight train in the yards. 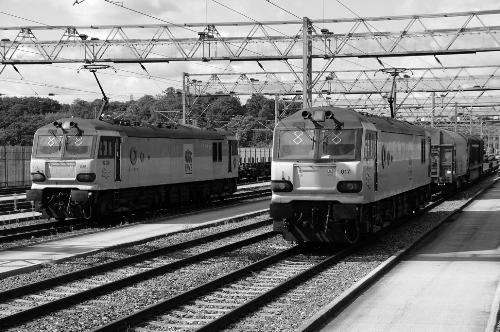 92026 “Britten” was attached to the leading end of the train for our journey to Wembley EFOC.  4E32 was given the road at 1151 and was sent on its way “Up North”.  We were sent on our way at 1159 to Ashford (UF) to Tonbridge where we were sat on the middle road to allow passage of the 1147 Hastings to Charing Cross service.  A few of the passengers of this service awaiting to embark at Tonbridge caused some interest amongst the passengers on the train. We continued on our way to Sevenoaks where we took the route to Bat and Ball, Otford and passed Swanley at 13/17 on the UFL through to St Mary Cray where we took the Up Slow through to Shortlands (13/28).  I had hoped we were going to do the Up Ravensbourne Chord but we found 4E32 sat on it awaiting passage to Nunhead.  Blooming freight trains !

At this point we were slightly late due to following 4E32 and after Nunhead our route took us through Crofton Road Jn (AL), Voltaire Road Jn, Factory Jn, Longhedge Jn through to Latchmere Jn, Kenny O (DWL – the through road) up to Mitre Bridge Jn and going in to the Midland Quail for the first time today.

At this point reader, I think you ought to get out your quails!

From Mitre Bridge Jn we carried on to Willesden West London Jn and took the Down Willesden Relief through to Willesden No 7, Wembley Yard South Jn and found our way on to the South Arrival and from what I can gather from my colleagues we arrived in to Road No 1 at 1416. The journey out of Wembley was as adventurous as the route coming in! We departed at 1424 with 59203 leading, and took the South departure but at Wembley South Jn took the Up and Down HLG round through to the PRDC Reception (But still on the Up and Down HLG) through to Harlesden Jn and on to the North London Line at Kensal Green Jn (now going in to Eastern Quail Territory).  At Camden Road East jn we took the Down North London No 2 (DC Lines) due to the building work going on for the East London Line extension (hence why the 92 was not leading).

At Lea Jn we came to a halt.  Our second and final minor problem of the day! The signalman was under the impression we were going right to Channelsea instead of straight on to Temple Mills.  But we carried on towards Temple Mills after the signalman amended the route.  Stratford – Wow! What a building site for 2012. But not just the Olympics but all the Transport infrastructure (Docklands Light Railway, Eurostar etc).  We carried on traversing the High Meads curve through to Temple Mills East Jn and arrived at Temple Mills Loop at 1526.

92026 was leading as we departed Temple Mills Loop at 1531 taking the route through to Temple Mills East Jn, Channelsea Jn, Stratford (P10A) taking the Main Lines through to Shenfield.  The speed on the 92 was impressive and our deficit away from Stratford (7 mins) was reduced so that by Shenfield we were only 4 minutes down.  Due to a TSR at Chelmsford our speed was reduced but were flying again passing through Witham 16/13, Marks Tey 16/17, Colchester (P2) 16/25, Manningtree 16/33 but were slightly regulated approaching Ipswich Halifax Jn arriving Ipswich at 1650 on Platform 2.

Our schedule was for us to be passed at Witham Loop, but the Liverpool Street to Norwich service was ahead of us from Stratford due to our late running.

At Ipswich people were asking station staff “Is this the service to London?”. Nope. We departed Ipswich with the 59 leading at 1654 and at Mainingtree North Jn took the curve down to Manningtree East Jn and in to Harwich International at 1722 on platform 3. 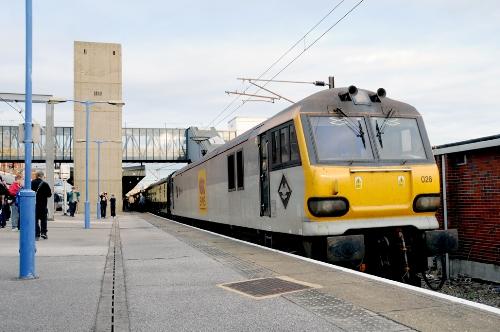 For my dad and I Harwich International provided memories of previous family holidays (OK, we didn’t spend them at Harwich!!!).  But, my grandma (the subject of my family bereavement at the beginning) was from Germany, and family holidays were spent in Germany.  This meant the train from Scunthorpe to Doncaster, Deltic / HST to Peterborough, for Loco Hauled from Peterborough to Harwich (The European) using the North to East Curve at Manningtree for the Harwich to Hook of Holland ferry. My last trip was on the Koningen Beatrix in 1986 / 1987. At Hook of Holland we always took the train to Cologne (or Koln) where family members would be waiting for our arrival, from then on to Siegen. The story about how my grandma got to England is another long and complex story which is just like a war time love story!  Needless to say thanks to World War 2, it triggered a series of events leading to me being born in 1975.

What was there to do?  Not a lot.  People wandered over to use the facilities watching the other EMU’s coming in.  No ferries I'm afraid either. We set off again at 1800 with 92026 leading. As the speed was increasing the light was starting to deteriorate.  We were early down to Shenfield (where station staff were taking photos) where we sat in Platform 1 from 1854 / 1856 and then went in to the UPL to allow passage of  the 1826 Southend Victoria to Liverpool Street, and 1730 Norwich to Liverpool Street to pass.  In the end, only the Southend to Liverpool Street service passed us due to Norwich service running late. 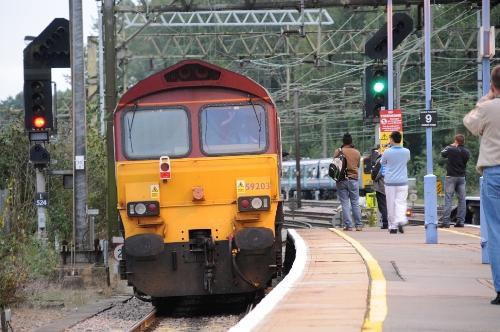 We carried on down the MLs to Stratford (platform 10) at 19/20 and went forward to Channelsea Jn, Temple Mills East Jn and arrived in to Temple Mills Loop at 1930.  Even though the 92 was not required anymore, it was kept on until Kensington Olympia for onward movement to Dollands Moor Yard. From Temple Mills Loop the route was the same as earlier when we came across from Wembley EFOC (as far as Kensal Green Jn anyway).

Passing St Pancras the station shone out in the night sky.  We were following a 313 unit through to Willesden Jn HL where England fans were stood on the station after England’s 2-1 Victory. We arrived at Kensington Olympia on P3 at 2034 and bode farewell to our party.

We found 377212 on platform 2 and departed at 2040 to Clapham Junction.  It caused no-end of chaos at Kensington Olympia and Clapham Junction because the train should have gone to Watford, but it went south to go North!  The station assistant on Platform 17 at Clapham Junction was appealing for help.  We overheard his radio saying “im all on my own and it’s chaos”.  We wandered over to platform 12 and took 377447 / 377402 in to Victoria (Arrival from Ore) and took the Victoria Line to Finsbury Park, and Piccadilly line to Cockfosters arriving there just before 2145 arriving in Scunthorpe around 1am………  Thank you dad for getting us home whilst I slept for most of the journey!

Well that was that, Sunday saw me travel down to Cardiff on a quite enjoyable journey.

Now for the credits.
Well done to all the parties concerned with the running of the tour it all seemed to go swimmingly! (OK apart from the Lewisham to Beckenham Jn bit!).

Well done to all.