As expected the day started with last nights loco, 486.504 again. Today we were heading for the Basel area and then a circular routing around Zurich. Once away from Interlaken, we took the main route via Spiez and Thun. Todays highlight in terms of haulage was the expected use of an SBB Ae 6/6, and sure enough waiting for us was 610486 in Cargo livery. Once attached to the rear we set off again taking the Bern Avoider before heading North through to Moutier and Delemont.

Upon reversal, a problem was discovered with the rear loco, which caused us to lose our path on the single track sections to Aesch. After being looped and held at various places, we made it in to Basel Cargo Yard over an hour down. A fairly quick reversal saw us retrace our steps past the depot and out beyond Ruchfeld Jct and across to Dreispitz Yard. Another quick photo stop was had here before passing around the back of the depot buildings and through St. Jakob station. From here we took the flyover and dropped down into the SBB freight yard. Another reversal followed (not quick though) and we took the branch into Birsfelden Hafen. We ran to the extreme limit of the AC overhead section in 'B' Yard, although the line did continue a little further through a fan of sidings. We made our way back to the 'A' Yard and disembarked for photos with the SBB loco positioned nicely next to the signal box. Two 18xxx diesel shunters were parked close by too.

Once back on board we headed back to the main SBB yard for our loco change. More time was lost here as we had arrived the wrong way round (caused by not going to St. Johann Docks beyond Basel) and the Class 465 loco was waiting the wrong end for us. Eventually it was decided to run it round, and replace the 456 loco. Now nearly 1 hour 40mins late we departed with 610.486 leading and 465.017 on the rear. We made our way through the various tracks of the massive yard, before finally exiting at Pratteln. From here it was quick dash past the impressive Feldschlosschen Brewery to Mohlin, and the next branch down to Acifer. Here we again ran to the electrified limit, where the 'pan' was lowered on the SBB loco and the 465 propelled the train forward a few chains for those wanting to get closer to the buffers.

A quick reversal saw us return to Mohlin, where we set off again towards Laufenberg and the freight-only route through to Koblenz. As per our last visit to this line, a photo halt was made in the infamous potato field. Once over the Aare River bridge and through Koblenz, we raced along to Eglisau and then up towards Rafz. Here we had hoped to visit the Homcim (Cement) branch, but unfortunately some wagons were stored on the access roads and thus prevented it. Note- It was later explained that due to the current downturn, the traffic from Rafz had ceased and the wagons had no where to go. Hence why they were stabled when we arrived.

After this we took a big circle around Zurich, taking in the sights of Winterthur, Bauma, Rappersil and Uetikon before emerging underneath the Hbf on the low level platforms. We continued our way Westwards through the freight yards at Herdern and Limmattal before arriving at Wettingen. The station is roughly at the north side of a triangle with Wurenlos and Killwangen at the other points. We duly made a three point reversing move around the 'triangle' in order to cover the freight-only curve back towards Limmattal Yard.

Since Rafz, we had roughly been an hour behind schedule, and snow we started our homeward run. For an interesting loco hauled diversion, we took the secondary route via Suhr to Zofingen, which crosses the two branches of the WSB network on flat 90' crossings. At Zofingen we had our last reversal before continuing though Burgdorf, Langenthal and the Bern Avoider.

At Thun we made our final loco change, with 'brown bomber 176' taking charge for the last leg back to Interlaken.
14 haulages so far (13 winners for me). 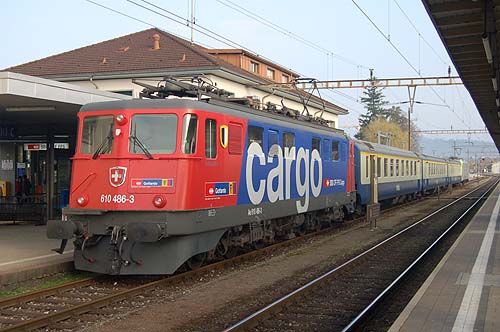 SBB Cargo 610.486 in its striking livery whilst en-route to Basel. 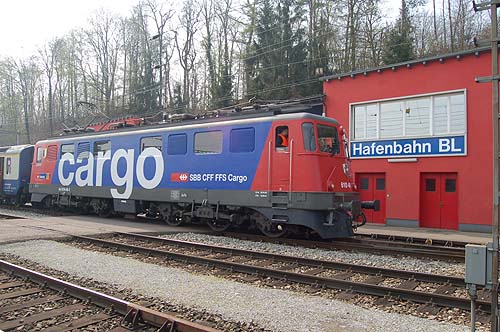 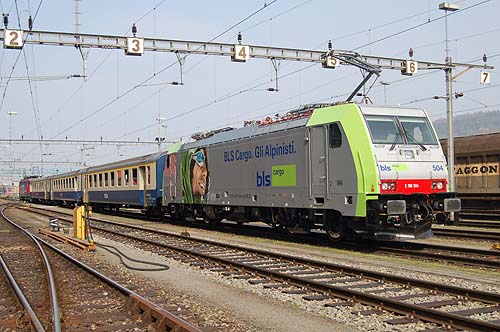 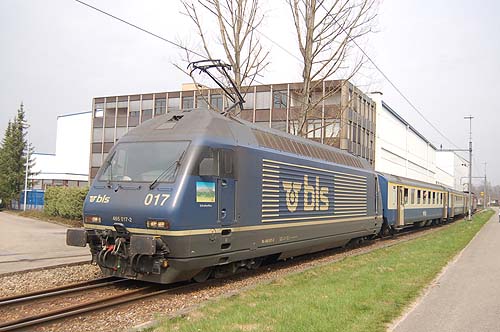