Notes :
(1) Tour coaches added to service train.
(2) 171.203 drew the tour coaches back beyond the crossover then propelled back through the connecting line.
(3) Loco propelling.
(4) End of Line given as 0.46km beyond Innertkirchen station. Although the train actually entered the tunnel section which was judged to be a further 4 chains of track.
(5) Only coach 50 85 28-05 314-5 was used for the run beyond Innertkirchen.
(6) Stuart Clarke has provided the tour mileages which can be downloaded here (Word document).

If it's April it must be Switzerland? That is now my theory, and sure enough Charters Helvetia were operating out of Interlaken again. For this year, Alan had organised 4 charter trains over the 3 days (Fri-Mon) with plenty of variety and interest for all.

Friday morning arrived and the usual suspects were gathered at Interlaken Ost ready for the first tour.

The original plan had been to use steam (Ballenberg Dampfbahn, no. 1067) for the run to Meiringen, but winter maintenance was not completed in time, and so the only other option was to add our coaches on to the booked service train instead. However, rather than the usual Class 101 loco, it had been arranged to have one of the 'rarer' 110's as haulage. In our case 110.003 did the honours. Once settled in, a straight forward run skirting the Brienzer See followed.

The main purpose of this mornings tour was to cover the connecting line between the ZB and MIB systems at Meiringen, and for this short move, we had additional haulage from 171.203. Once across the 'divide' we had a short photo stop, although the shunt driver detached rather quickly and left some people without the shot. After a while the service unit arrived and duly coupled to our coaches and took us up the short branch to Innertkirchen. A photo stop was made at Aareschlucht Gorge beside the river, with around 50+ people using the adjacent bridge to get the best angle. (There were a few creaks and groans from the bridge under all the weight at this point). The MIB line only has two single car units, and we had use of the older one, number 11, for this trip. At Innertkirchen we stopped at the normal passenger station for more photos, before the next highlight- a run to the end of the line with the local TM shunter. Once fired up, TM10 (ex-SBB 980) was coupled on and performed a small shunt with our two coaches.

Due to the inclines ahead, it was decided to only use one coach, although in the end the 'gronk' actually managed without too much problem. The extension was given as 0.46km's, and ended at the cliff face with an impressive gated tunnel entrance. I truly believe that most (including me) thought this was the end of the line, but after another photo stop, the tunnel mouth was opened, and we were able to walk inside to view the turbines etc, of the power station itself. At this point it was noted that the tracks continued a short way into the actual tunnel. Shortly after, a worker appeared to move a fork-lift truck that was parked across the track and then once all clear, the train edged it's way to into the mountain. According to the local staff, it was three years since the last train ran beyond Innertkirchen (a works train with parts to service the turbines) and most definitely the first ever passenger train to do so.

Back at Innertkirchen, the other unit (number 8) was attached and took us back to Meiringen, where another shunter, this time TM597, was scored as we were shunted back on to the next service train arriving from Luzern. Haulage back to Interlaken was with 101.968.

Wow, what a start to the weekend. We had cleared the entire MIB network for both track and haulage and gained a couple of ZB shunters too. 7 haulages so far (6 winners for me). 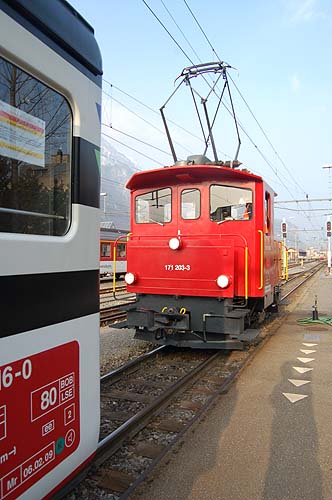 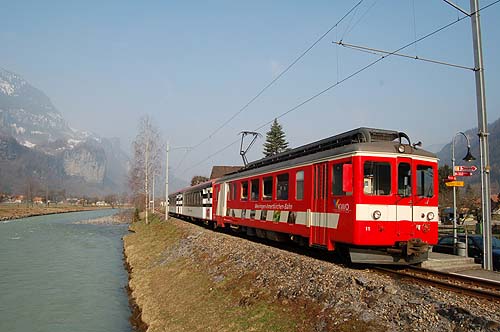 EMU 11 at the Aareschlaucht Gorge. 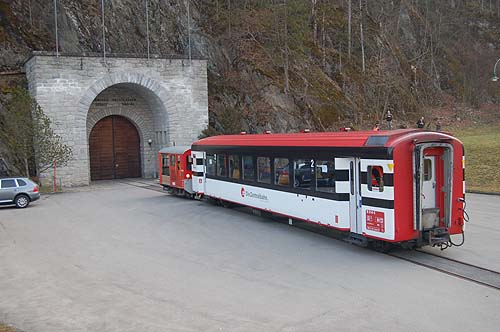 TM10 (ex-SBB 980) at the end of the MIB Line beyond Innertkirchen...
Well almost the end anyway. 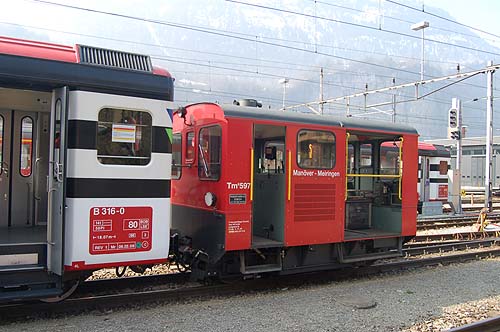 TM597 after completing the shunt back at Meiringen.