Notes :
(1) 47245 on rear.
(2) 70013 on rear.
(3) Two round trips were made from Folkestone Harbour to Folkestone East Train Roads for photographic purposes, giving the opportunity for locals to travel on the train (as this was billed as the last passenger service into Folkstone Harbour with the branch due to close on 15/03/2009).
(4) Train was originally advertised to start from/terminate at London Victoria but was diverted to start from/terminate at London Waterloo. Original advertised routing was as follows: - London Victoria - East Croydon - Redhill - Edenbridge - Tonbridge, then as above to Folkestone

This train was described as the last train to Folkestone Harbour and we were advised that the line from Folkestone East to the Harbour was to formally close on 15th March i.e. the day after this special train. A group called “The Remembrance Line Association” has been formed with the objective of reopening the line to the Harbour together with all the necessary infrastructure. It is to be hoped that they are successful!

There was tremendous lineside support for The Golden Arrow with photographers located throughout at bridges and other lineside vantage points. The arrival of 70013 at Folkestone Harbour was also greeted by large crowds. This made it very difficult to find clear lines of sight for the subsequent run-pasts particularly for those of us who had arrived on the train. It is unusual for the travelling enthusiast to be provided with an opportunity to photograph his/her train in motion. This was the case at Folkestone and the two additional journeys up the incline from Folkestone Harbour to Folkestone East were well photographed. Oliver Cromwell produced spectacular performances on each ascent with smoke and steam aplenty.
Operationally the Golden Arrow was a real success with no significant problems encountered anywhere – even the vacuum brake problems experienced by 47245 which caused a special stop at Penge East, (09:01 ~ 09:15), on the outward journey was rectified and the consequent late running was soon caught up. It has to be said that the lack of the need to couple / uncouple locomotives and to run round trains contributed greatly to the success of the day. Shunt moves were not the long drawn out affairs that is so often the case. The water stops were professionally undertaken and were concluded within the allotted times.

Oliver Cromwell acquitted herself exceptionally well throughout the day and was a real credit to her crew and to the many and varied enthusiasts who have brought her back to life. 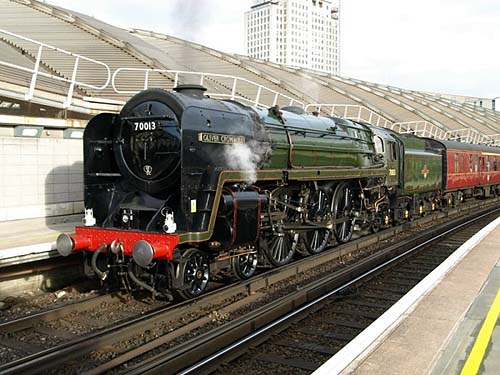 70013 waits to leave Waterloo in the morning (photo: Gordon Jakes) 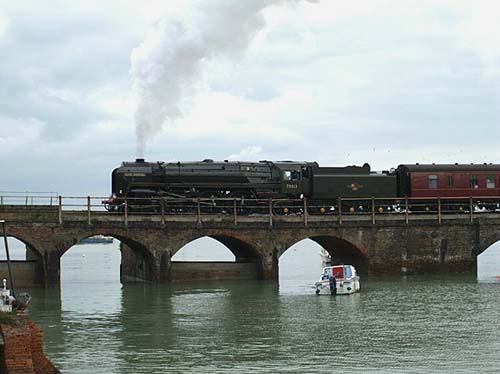 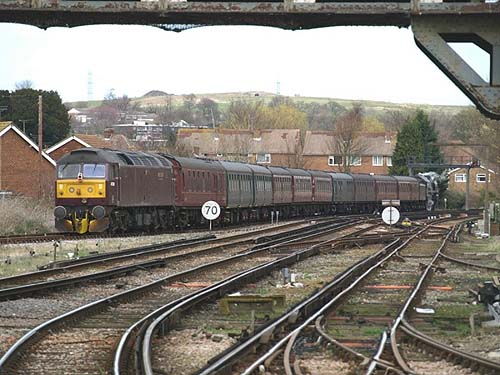 47245 on the rear at Canterbury West (photo: Gordon Jakes)