Notes :
(1) Held in Drem Loop whilst (unsuccessful) attempt made to obtain paperwork for booked route via Millerhill Yard.
(2) Diverted via Edinburgh Waverley with intention of regaining booked route at Haymarket West Jn.
(3) Headlight failure on 37417 at Edinburgh Waverley so diverted to Millerhill Yard via Edinburgh Suburban line to enable locomotive change and repair to be effected.
(4) Booked break curtailed to pick up time. Train watered in platform instead of running ECS to and from Polmadie for servicing.
(5) Diversion added as compensation for some lost route earlier.
(6) 37417 failed whilst in Beattock Summit Up Loop because of loss of coolant.
(7) 37's used in lieu of a Fastline Class 56/3.

Aren't we just mad in doing this hobby? Rather than an early start, just set off the night before so I got to Bolton station for the 20.05 to Wigan and meeting my friend on the Pendolino from Wigan to Crewe which went fine. 3 hours to kill at Crewe before the tour was due but a reasonable amount of activity including a couple of DRS 66s one being 419 heading north on a long Intermodal meant it didn't take too long to pass even if the we were thrown out of the station buffet as it closed at 9.30 and were starting to feel cold when the tour rolled in behind 66074 at about 11.40pm. Locos changed to 37417 and 422 that we had passed earlier at Warrington and an on-time departure at 00.25 or so. To Manchester Victoria via Newton-le-Willows, and across the Pennines on the Calder Valley route where very slack timings gave about a 40 minutes early arrival in York. A bonus here was a southbound diverted load 17 sleeper behind 90021 in First Scotrail livery which arrived and departed without waiting long. Off again promptly and I peek an eye open as we pass through Newcastle with the departure screens showing the first trains of the day to Kings Cross and Chathill. More shut eye and I awaken with a start as we enter Drem down passenger loop, and again well early. A 322 goes both on and off the Berwick branch and still we don't move. After a while, the Pathfinder train manager comes on: a b*lls-up at Network rail means the correct paperwork isn't in place to give us the authority for freight the line into Millerhill and there is doubt about the Deanside branch later so we are here until they can make up their minds what to do with us. I think railtours should have a farce-factor rating out of 10. 8 here and about to get higher: we are to divert via Waverley, the new driver is in a taxi from Millerhill to Waverley and we are to continue with the 37s [no Class 60] and pick up our path from there. We get into Waverley and wait. And wait. And wait. Passengers on the platform are looking for a Bournemouth train. We depart and head west. Just as we should be heading to the Fife lines, the train manager comes on again: "you will notice that we are now turning onto the Edinburgh suburban line"...the headlight on the leading loco is broken so we must travel at 20mph to the nearest depot (Millerhill!). Despite attempts to fix it at Waverley, the other 3 headlights all have different fittings! So we trundle around the suburban and get to Millerhill by the wrong route and over more freight only lines over which there was no doubt no pre-ordained authority to travel...hey ho. Farce factor in the red-zone: will we even get SAK being this late? Will Deanside be caped?

However, the 60 comes on the back and we set off whence we came, taking the other curve from the suburban back onto the main lines. I didn't need either of these and wanted the ECML connection. D*mn and blast! We are now about 1 and three quarter hours late. But on the railway, miracles do happen and what odds would you get on a clear run straight through to Glasgow Central with only 5 minutes to wait at Dunfermline for an MGR coming off the Alloa line? The sky is black and for SAK, it's tipping it down. The flare at Grangemouth refinery can just be seen across the Forth through the driving rain. Highlight of the day route-wise. Low-light [literally!] weather-wise. However, an almost non-stop run was had and we get to Eglinton St having taken the slow-lines past Rutherglen all the way from the Rutherglen and Carmyle route. 5-10 minutes wait here but I guess that with load 13 + a loco on the front + 2x37 to re-join us at Central on the back, it has to be Platform 11 we're heading for - and it is. Arrival about 1hr 25 late so just half an hour here and we can leave on time. Which we do, with the 37s, as booked.

Pathfinder again " we can offer you some track that we hadn't planned: we've had a word the the Box and we're to be routed via the through siding on the way to Deanside". Don't need that either :-( . Authority? We do Deanside as scheduled but the track is fairly rusty although there's just a hint of polish as we brush up against the trees and get to the run-round loop. A massive site this, but most of the rails rather rusty and HNRC's 12082 is spotted inside but not much else from a railway point of view. I wanted 09107 which was active here a lot in the recent past, but as ever, shunters get away from me. The 37s run round and we depart the branch only a few minutes late. My Burger-King lunch and little sleep now catch up with me. I am dead tired and can't be sure if we stopped in Beattock loop. Think we did and a Pendo passed us. I doze and wake up as we pass Kingmoor but I can't get to a door in time to get a better view of the DRS locos. Another slack schedule and we arrive outside Carlisle station very early -1 hour for the last 50 miles yet the locos happily do 80. Pathfinder again "we are ahead of schedule and have asked to depart Carlisle as soon as everything is ready". We set off and there is much slipping on wet rails. The loco change happens - it's now 92002 - but I am told that's been on a Pathfinder before, so some more disappointment in other quarters. A Northbound Fred [583] passes on coals through one of the centre roads and an EWS 66 that I miss passes on Platform 1 southbound on EWS coal wagons.

Again, slack scheduling and we get to Preston early so I have a comfortable connection into the 20.11 to Bolton and am guaranteed a good night's sleep....Final haul: 1 new route - SAK but should have had another. A couple of 66s from each of EWS, DRS and Freightliner, a few more ScR units including my last 322 and 170406 in Waverley which I would have missed had we gone the intended way. In this game, some you win, some you lose....

The tour went to plan until we reached the outskirts of Edinburgh – indeed arrival at York was no less than 46 minutes ahead of schedule but unfortunately no advantage could be made of this early arrival because York was a passenger pick up stop.

The first indication we had that all was not well was when the train was unexpectedly routed into the Down Passenger Loop immediately east of Drem. At first the looping was assumed to be due to the fact that we had been running circa 10 minutes early but time passed and eventually the bombshell was dropped over the public address that the necessary paperwork was not in place within Network Rail for our routing into Millerhill Yard. We were advised of ongoing discussions between Network Rail and EWS and that the visit to Deanside Loop might also be in jeopardy.

After over an hour in the loop we were finally advised that the tour was to be rerouted and that we were to take the direct route to Fife through Edinburgh Waverley thus avoiding Millerhill Yard and the Edinburgh Suburban Line. The pair of class 37 locomotives were to remain as our motive power until arrival at Glasgow Central.

Without further delay we exited the loop and proceeded to Waverley at a leisurely pace – taking 34 minutes to complete the 17 miles. Arrival at Waverley was in platform 19 much to the surprise of the passengers on the platform who were expecting a Cross Country service to Bournemouth. Our train gave no impression of going anywhere and finally the passengers on the platform were advised to transfer to the other side of the station which they duly did amidst much consternation.

Meanwhile we were advised that the lead engine had been failed due to a non-working headlight and that despite efforts to swap lights etc the situation could not be rectified because all the headlights had different fittings! As a result and following normal rules/procedures the train was required to proceed to the nearest maintenance point at a restricted speed of 20 mph. Where is the nearest maintenance point to Waverley station? Well you’ve guessed it – Millerhill Yard! So what we could not do officially because of the lack of paper we could do as a result of having no headlight – in daylight! The world has really gone mad.

Eventually we left Waverley having caused a degree of chaos to the morning peak service not least by the movement from platform 19 to the Down South line which nicely stitched up the throat at Waverley West End. The Edinburgh Suburban line was reached via Haymarket Central Junction and Gorgie Junction and then Millerhill Yard was accessed via Niddrie West Junction and past New Craighall station.

At Millerhill Yard the two class 37’s were detached and 60100 was attached. The train thus reversed and continued with the original booked route to Fife etc. We departed Millerhill Yard circa 110 minutes late and this level of delay was maintained until Charlestown Junction. A slight improvement of some 10 minutes was achieved on the route through Alloa to Stirling.  After leaving Stirling 60100 began to make inroads into the late running thanks in part to some easily timed sections but also due to the lack of conflicting trains. By the time that we reached the outskirts of Glasgow the lateness had been reduced to 70 minutes. Any hopes of reducing the delay any further were thwarted by a signal stop at Egglington Street Junction which resulted in a 76 minute late arrival into Glasgow Central. Not a bad result by any means given the degree of trauma earlier in the day – and none of it our fault.

The onward journey to Deanside Loop and then south to England and home remained at the booked departure time from Glasgow Central. The route from Glasgow Central to Shields Junction was varied by traversing the Lye Through Siding rather than the Down Main. It seems this piece of infrastructure did not need any paperwork but then we should be grateful to Glasgow Panel who accepted the minor diversion without protest. Nothing further was heard of the existence or otherwise of the paperwork for the visit to the Deanside Loop but the visit was successfully made and credit to everyone involved in making a great success of a day that started out so badly.

Finally the suburbs of Glasgow were left with the train some 10 minutes late but this delay was turned around by arrival in Carlisle with some exciting running from our pair of class 37s. I left the train at Carlisle to catch a Pendolino southwards so I cannot report any further. 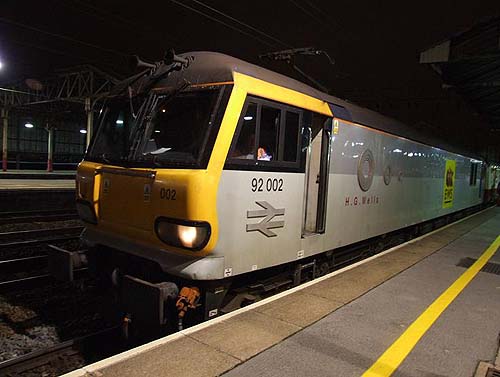 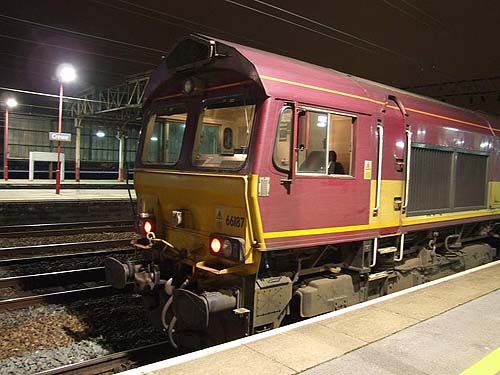 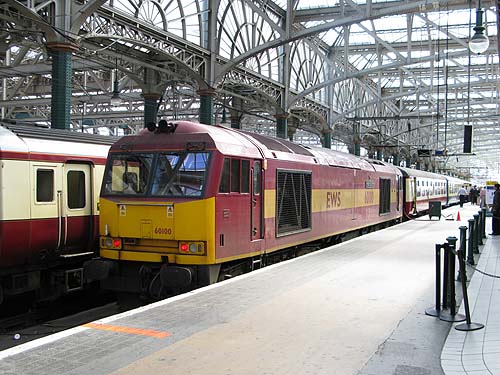 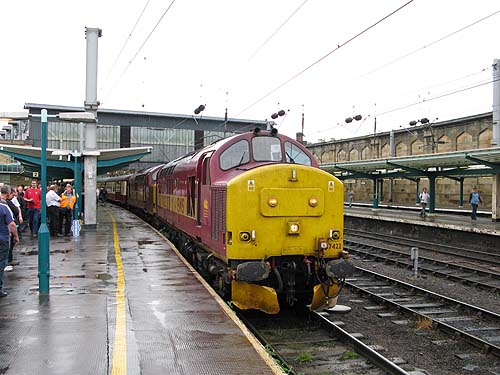