I went to bed on Thursday night with a sense of foreboding. The weather threatened to grind the country to a halt with a Atlantic storm moving in from the west to meet colder air that had dumped snow on the eastern parts of Britain over the last few days. A recipe for disaster you might think...

But no. I stood on the end of my drive waiting for my lift to Tamworth, eagerly awaiting what promised to be one of the tours of the year if it lived up to its expectations. DRS were going to offer us at least one pair of 20's from Crewe to Carlisle, out via the S & C and back over Shap. Utterly unmissable and a guarantee that virtually everyone with an interest in such classic thrash traction would be on it...and they were!

So to Tamworth and the score on the doors suggested that our charter hadn't even left Derby yet. It was suggested that Toton was still refuelling 67013, the train loco - even though they no doubt had at least half a dozen other 67's sat around doing nothing with tanks full to the brim...

So 25 minutes later, the aforementioned 'skip' rolls in and we have our first surprise of the day - a bay of four in coach A right behind the action. Feeling well satisfied, we rolled on toward Walsall via Sutton Park and Wolverhampton, picking up the rest of the Midlands bashing world. A canny run to Stafford saw us collect more cranks and the journey turned to the latest permutation of locos, which were now thought to be 20305 and 307.

Now, I have an issue here. 20307 used to be 20128 and my records suggested I needed 307 (and 311 and 313) for all time. However, 20128 was one of the four BRT locos (along with 20075, 131 and 187) that were practically welded to the 1993 Leicester - Skegness services that summer towards the end - and I practically lived on them that summer. Who remembers the decrepit state of such locos that year like 20066, 132 etc? I will never forget the one crank that year who used to bring an inflatable rock guitar with him and used to 'play to the gallery' out of a droplight every time the 20's opened up. Did you all go to the Vine at Skeggy to spend 7 hours getting hammered? The 20's used to arrive to Skeg at 5 past opening time. Remember the single loco that had to get us back to Leicester after it's partner failed? Two pairs on one train? Happy days...

But I digress. It looked like I needed 307 although I'm sure that I had all the four aforementioned machines in that summer. Anyhow, I've scored it now regardless, so let's move on.

There was barely room to breathe in the packed front coach when the two locos backed on. And, as the old war horses opened up, I remembered how it used to be - lots of noise, thrash and not a lot of forward surge. However, the crews seemed up for it as the 'DRS Crewe - On A Mission' head board seemed to suggest. 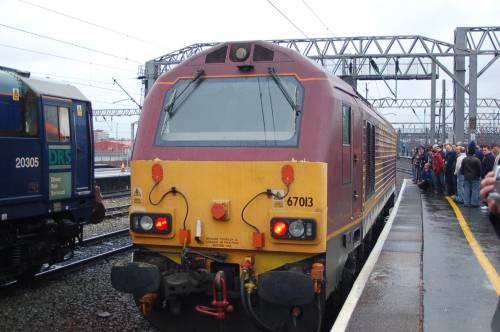 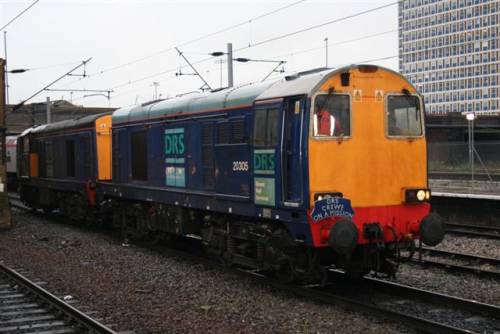 The atmosphere in Coach A was indescribable. Packed to the brim with bellowing cranks and every window wide open - this is what it's about! A short stop at Warrington and a full power getaway completely withered the normals on the station - hellfire! Then it was on up through Wigan to Farrington Junction and a perambulation along the line to Blackburn. Leaving Blackburn through the tunnel was awesome and whetted the appetite for the climb past Settle Junction. After the obligatory photo-stop at Hellifield (surprised they left this in as we had been running a fairly constant 25 minutes late) we roared up through Settle and flat out, climbed towards Ribblehead Viaduct and listened to the full out and out racket through Blea Moor Tunnel. Utterly brilliant. 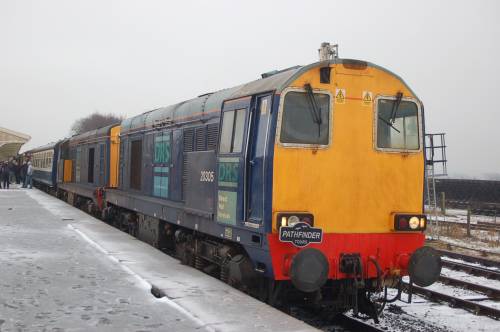 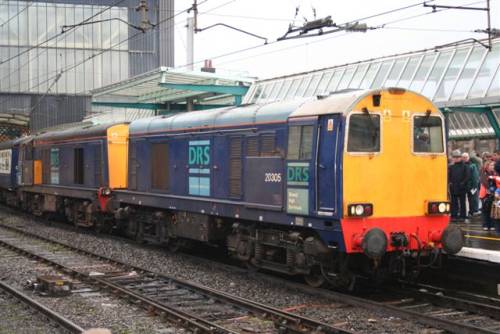 Carlisle after the superb run from Crewe (photo: Mark Honey)

So, into Carlisle and a 2 hour plus break where we managed to squeeze into Wetherspoons, bolt down a very suspect lukewarm Kitten Tikka Masala and head back to the station for the second surprise of the day, a change of locos - 20311 and 315. Everyone reckoned they needed 315 (the erstwhile 20104) but I didn't. I scored 311 so I was a very happy man...

I just had to head to the front coach on the way back for the climb to Shap - which was completely fab. Just hard unremitting solid EE thrash. After listening to them plunge downhill, it was back to the seat and a well earned kip. So much so that I didn't move until Wigan!

It was all fairly routine now. The locos came off at Crewe to be replaced by 67013 again as we retraced out route back to Derby. Typical NR timings saw us overtaken by everything from horse and carts, milk floats and hearses and we sat waiting time all over the place. The winner was 20 minutes on the Sutton Park route waiting to join the Derby line at Water Orton to let everything and it's cousin go by. We still rolled into Tamworth on time however and the end of a brilliant day.

So to the summing up m'lud. Brillant, fab, awesome, hellfire, My Lords, quality etc etc etc. Rerun tomorrow please, then the next day - and the day after that. Other highlights included getting through a bottle of 10 Year Old single malt whisky in under 2 hours (yes , I had some help) and catching up with people I hadn't seen for ages. What was hilarious though was looking at the old Class 20 diehards getting a right proper fix after literally years of cold turkey.

Without doubt one of the tours of the year.