I suspect I am not alone in wondering where 2005 has gone - for me it has been a year heaped up with a few challenges away from the railway scene and, combined with somewhat less than exciting railtour offerings is a year I have not been out much travelling (at least, not in the UK). Finishing off the year with a flurry however I booked on today's tour as well as the Pathfinder tour on the 30th which is promising a pair of DRS class 20's.

This DPS railtour was effectively one tinged with some sadness as it was being run to mark the withdrawal of 55019 'Royal Highland Fusilier' from mainline operation. Why? Well, from Jan 1st 2006 all locos running on the mainline would need to be fitted with OTMR (data recorder - the railway equivalent of the aircraft "black box) unless it was declared in advance the loco concerned would not run beyond the end of 2007. The railtour scene and that of 'heritage' locos in particular has been plagued through 2004/2005 with lower and lower bookings to the point where advertised outings are being cancelled. What society would therefore want to spend £20,000 and more having OTMR fitted with the attendant risk of not getting enough bums on seats on the future outings. The DPS after cancelling their October tour decided not to have OTMR fitted to 55019 and thus this tour became the mainline farewell. With Fragonset-Merlin Rail offering to be the TOC at a very reasonable rate (stock and staff available) the trip came out at an incredible £29 a head for standard class. An £20 add-on guaranteed a seat in the leading or second coach from the loco too.

The morning dawned well, to put it bluntly, f*&%$£g cold. A major ice and snow scrape was required in the Northampton area before our car-load was on its way northwards. With one of our party coming off a train from Leighton Buzzard at 07.05 or 08.05 the earlier train had to be used hence we drifted into the Derby area about an hour earlier so a breakfast stop at the M1 Jn23A services was taken. Good job - Derby station was just as cold and frosty and a first look at the stock in the adjacent siding told us it was not very warm! 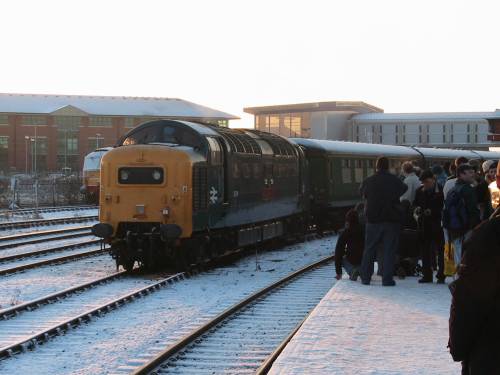 Ice cubes anyone? 55019 with the stock at Derby (photo: Gary Thornton)

55019 looked superb, the addition of some black paint to the headcode panel acting as a reminder of this being her last mainline outing (for the foreseeable future...). We were all hoping it was going to be a good send off despite the cold weather! After a shunt to the platform our group boarded (coach C, towards the rear) to confirm the frosted windows meant what we thought - sod all heat. We were despatched from Derby about quarter of an hour late, by which time a hand under the seat revealed a few joules of heat were in fact present (we decided this was probably just the heat coming off a couple of hibernating gerbils that had decided to spent the winter months 'on the bash'). I'm sure the winter  scenery as we headed northwards was spectacular - we've no idea as we couldn't see anything out our windows for the frost on them...make mental note next time to bring scraper from car...

By Sheffield the sun, but more like passing air friction, had caused the windows to clear a little...possibly also helped by a virtually full carriage so there being 64 bodies worth of heat inside too. The sales stand was doing good business with it's new offering of a DPS woolly hat!

After pick-ups at Chesterfield and Sheffield it was on to York where 55019 ran-round in readiness for tackling the Pennines. Many went off in search of hot sustenance here - the buffet on-board was doing good work but was slowed by the fact the food (bacon butties etc) had been put on frozen as it had to be obtained pre-Christmas. 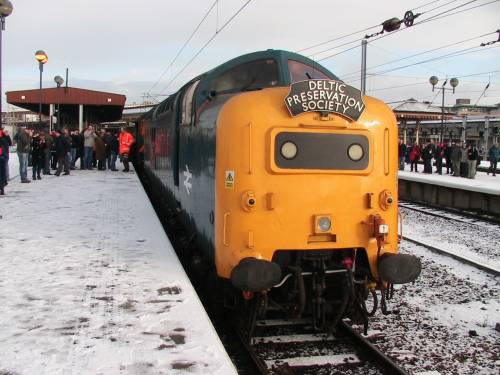 Being nearer the front now the next few hours were enjoyed with windows open despite the arctic conditions - hell, why else were we here but to enjoy the loco hard at work on load 13 over the Pennines? Conversation turned to the state of the rolling stock several times. Whilst we were only a couple of days into this cold snap, it seems unbelievable the stock provider had knowingly let out such an apparently defective set of stock - of the 13 coaches most had managed a variable amount of heating but several (the count varied but 3 or 4 seemed the commonly quoted figure) stayed basically unheated all day. I know the passengers in some coaches were given vouchers for free hot drinks to stave off the effects of the sub-zero temperatures. Add to that (once it got dark) at least one coach with no lighting and at least one toilet ditto (personal experience, and I think there were others) and I hope the DPS will be having a serious chat with FMR about the situation.

Anyway, for those of us at the front the performance of 55019 was such that the discomfort was about bearable (comments by passengers from other coaches suggested our coach was actually one of the better ones). The white scenery seemed to fade back to green the further west we went but with a lot of photographers out there recording our passage hopefully some good wintery photos were obtained. All too soon however we were back at York and another run-round. A wreath was added to 19 at this point, lest we forget this was the last time RHF would be "doing the honours" on a DPS mainline railtour for, well, could it be...ever? 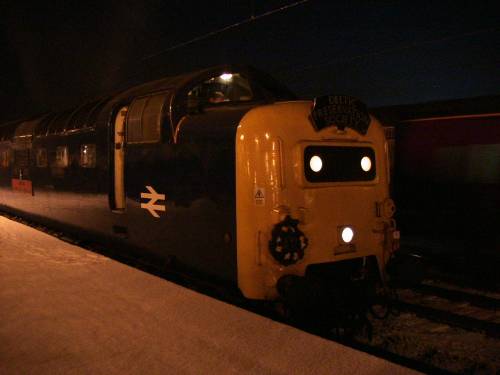 Arrival back to Derby was 2 minutes early (despite a very slack schedule, Network Rail managed to find enough reasons to fully consume the time rather than letting us run where a 20 minute early back to Derby could have been easily achievable). Maybe it was just a plan to ease RHF slowly into more sedate running as she'll now experience back on preserved railways? At the end of the day this was a most enjoyable day out even allowing for the potential loss of various of ones personal extremities to frostbite. A shame the loco is to be de-certified for mainline operation but in my opinion the correct decision bearing in mind the current apparent lack of interest amongst many enthusiasts for booking on 'heritage traction' tours.