Notes :
(1) Trains were combined at London Bridge and ran as one throughout the rest of the tour.
(2) Relief working, carrying passengers.

Now this was one not to miss. The final days of the Slammers beckoned, and a run on possibly the last ever slam door tour was duly booked. From the early days, a CIG-VEP-CIG combination was promised.

The tickets soon arrived and we were allocated one of the CIGs. An early morning found us making our way in the frost and mist to Clapham Junction to photo the ECS stock on its way to Victoria. 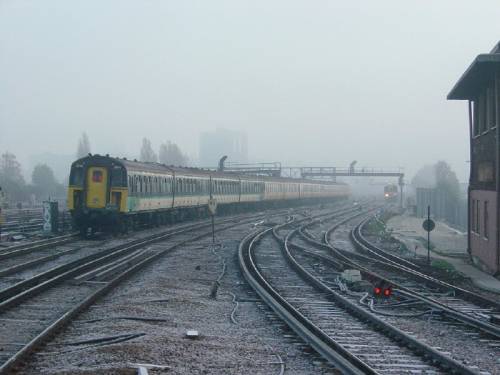 With this task duly completed, we caught the next train to Victoria and overtook the stock outside the station only to photo it coming into Victoria. With our CIG - 1866 - found, we hopped on board and found our seats.

The train was split, for operational reasons, and CIG1805 and VEP 3514 tootled off first hotly pursued by 1866. The tour crossed just outside East Grinstead, with much photing by all out of windows.

Pictures were obtained at East Grinstead, - with the departure indicator flagging us as the next train to Plymouth!

It was then back to London Bridge and probably the last joining of 2 slammers in public service was recorded. Sustenance was taken at London Bridge, and then back aboard and off to Littlehampton.

Running was sedate as we were behind stoppers as far as Horsham, but then a piece of spirited running to Littlehampton was in order, with mid - 70's being achieved.

There was about and hour and a bit at Littlehampton, where various plastic was observed to-ing and fro-ing. Plenty of phots were taken including Gulls on top of the train, plastic things, and the departure indicator showing us as the 1352 to Aberdare, calling at Merthyr Tydfil and LlanfairPG.

A gentle trot to Preston Park and Brighton followed, observing the Sheds at West Worthing, where, hopefully, the SEG can fulfil their dream and take it over as a 3rd Rail Museum.

A quick-ish reversal at Preston Park yielded more photos, then a slow entry to Brighton provided sight and photo opportunities of VEPs 3486, 3505, 3530 and 3535.

A short stay at Brighton meant reversal and a trip to Newhaven and its famous Marine Station. This was a double whammy for me, as it was my first visit to Marine and on a slammer! 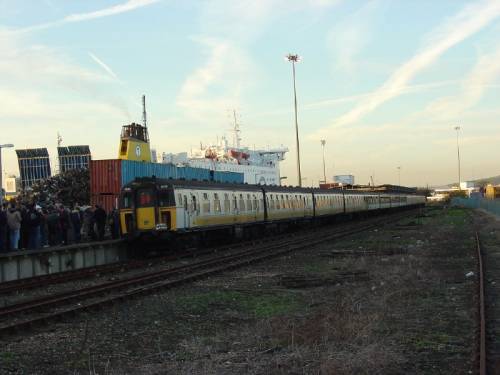 I was last in Newhaven in the summer, overnighting prior to a ferry crossing, and was lucky enough to timed my stay with the last scheduled slam door workings, with, lo and behold, a trip on 1866 to Seaford and back!

Newhaven is pretty desolate and some brave souls tried to find either a shop or a pub. We never heard if they were successful - perhaps they are still looking.....

All to soon it was time to leave, and the kind signalman had laid detonators for our departure, it must have been impressive if the sound was anything to go by, but I haven't seen photos of the departure yet.

It was then non-stop to Victoria and the end of the tour.

However, soon after leaving Brighton, there was an announcement that the ECS to Lovers Walk would run as an addition passenger service! Unfortunately pre-booked tickets precluded this, but I understand it was fairly well patronised.

All in all, a darn good day out, weather was cold but sunny - good for phots, great company on the train, Well done SEG and Southern!