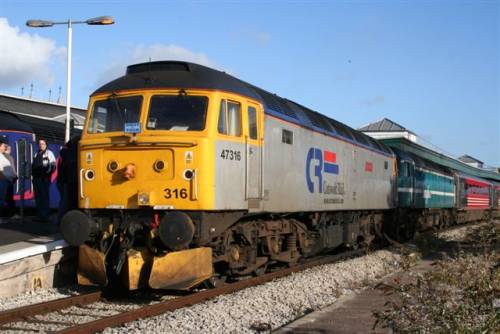 After last Saturday's jaunt with the 'Western', you'd think I needed to take it easy this weekend. Not so. I'd been weighing up the pros and cons of doing a Heartland Rail tour for a while. While a relatively new player in the railtour market, they push firmly at the excursion market which means you don't attract massive hordes of enthusiasts. Cotswold Rail also have a fleet of ex-Virgin Mklll carriages which has made the tour experience a lot more palatable. Plus starting from stations in the West Midlands (their base is Oxley, Wolverhampton) means no marathon ECS running in the dead of night to get to the starting point. It also keeps the costs down! The motive power is usually 2 x Class 47's, and as there are no booked workings for this class (officially), it maintains an enthusiast presence. It also offered a chance to meet the Cotswold Rail boss Adrian Parcell and find out more about this enigmatic individual.

So I yawned my way along the M6 at 5 o'clock in the morning to Codsall for a high mileage hike to Penzance and back. I appreciated, not for the first time, the fact that my car has a satellite navigation system, or I would have never found Codsall station, fumbling my way down darkened streets to get to it. A handful of familiar faces were waiting and at 6 o'clock, the train rolled in behind 47316 and 47714. After two previous trips with 47316 and 47813 where the '813 refused to multi up, 47714 was provided.

I bumped into Adrian demolishing a bacon roll and thought that was a good idea! A strong coffee later and I felt somewhat better. After a brief chat with Adrian, I found a bay in first class and chilled out. It was surreal at first; I've spent so many years commuting in Virgin MkIII's from Rugby to Euston, to glide along at a canter along the Wolverhampton-Shrewsbury line was, well, different. After picking up at Albrighton ,Telford and Wellington, we turned off to follow the avoiding line to join the Welsh Marches route. Having only load 8 meant that two Class 47's had no trouble at all with the train and they leapt away from each station stop.

The run along the Welsh Marches line was great, with the sun rising and the prospect of a nice day. We picked up at Church Stretton, Craven Arms, Ludlow, Leominster and Hereford before drifting through Abergavenny and Cwmbran to Newport Maindee curve. By now we were running around 20 minutes early and thoughts that we would be regulated on the curve to wait time were unfounded as we were signalled straight onto the GW main line. So, Plan B: would we be given the relief line instead? No - because the crossover isn't there at the minute! It's being re-laid.

A steady run to Severn Tunnel Junction saw us turn off and drop down to the Severn Tunnel mouth. We coasted to the bottom and the driver left it until the very last minute to open the Class 47's up on the climb out so as to get closer to even time. We crossed over at Patchway to gain the route into Bristol via a stop at Filton Abbey Wood. From here to Temple Meads is downhill and we coasted through Stapleton Road to a right time stop at Bristol. We had a pathing stop here for 25 minutes as well as a crew change, so we used the advantage to get some pictures in the good weather.

Leaving Bristol we spied A4 60009 'Union of South Africa' waiting to take a tour to Kingswear. I also spied the heavy clag emitting from 47714. 'Must look at the injectors on that one' remarked Adrian.

It was between Bristol and Exeter that I really started to get into the swing of what Heartland Rail are trying to achieve. Firstly sitting in a MkIII first class carriage is still the height of travel ambience as far I am concerned. It just glides silently. Any of you who have hung on for dear life in a MkI, tearing down Shap at (over) 100mph, an hour late, behind an electric with a wild eyed driver in the front, scraping your soup course off the person opposite - will know what I mean. It used to be acceptable to rattle along in the equivalent of a 3rd rate strip club (not that I'd know, obviously), but I'm sure you get the gist. The other area is the staff. They are extremely attentive and have an uncanny knack of making you feel very much at home. Adrian Parcell also has the use of the services of Richard Szwejkowski, a veteran railtour manager and organiser, more well known than the Pope and who is older and has more miles on the clock than the 2 Class 47's on the front.... He certainly knows his stuff though and I thought he looked much more comfortable in this railtour environment. Perhaps it's the first class MkIII seat...

Anyway, back to the plot. We drifted through Exeter and then it was everyone to the droplights for the run along the sea wall towards Teignmouth. After this, such was the convivial atmosphere that I missed large chunks of the journey and didn't even remember stopping at Plymouth! The conditions were ideal for heads out of the droplights for the crossing of the Tamar by the Royal Albert Bridge. It was still a beautiful day. From here we made steady progress towards Par - where it all started to go a bit Pete Tong. We had been running more or less on time, but were stopped outside Par. This started to make Richard uneasy as there were many passengers detraining for the Eden Project. It appeared we had triggered a hot axle box detector. Our travelling fitter checked it out, but it proved to be a false alarm. However, it cost us about 20 minutes. We really didn't have much chance of making this up before Penzance and worries turned whether we would have enough time to check the locos over, top the fuel up and swap them round, as 47714 needed to be coupled to the stock to provide ETS. Adrian also muttered something about 'having the hubcaps off '316 just to make sure it was OK'.

In the event, after a wander around Penzance and a spot of lunch, we got back to the station to find the stock in, but no locos. The stock was being watered and hassles in swapping the locos round and repositioning the stock meant that a 15.50 departure was looking unlikely. We really needed to be out before the 16.00 Paddington HST as that called at all stations to Plymouth - and we didn't. Getting stuck behind it would cost us. Richard, thinking ahead, was concerned that we might get stuck behind other trains which might delay us to the point where access to the Shrewsbury-Wolverhampton line might be difficult - it shuts at 00.45.

We did indeed leave behind the 16.00 and progress to Plymouth was a stagger, partially due to long block sections and the fact that 2 x Class 47's on such a light load were catching the HST up between block sections. By the time we finally got to the Royal Albert Bridge we were nearly an hour adrift. However, the setting sun over the Tamar estuary was a sight to behold...

Leaving Plymouth, the Class 47's were really opened up, with a 'steady on!' comment from Adrian. By now though, we were well out of path and at the mercy of other service trains. Arrival at Bristol was still significantly late and the driver who had brought the train from Oxley earlier that day was keen to be away. However, Adrian was worried about fuel as the two locos weren't touched at Long Rock. As it transpired, he needn't have worried.

We set down at the same stops, but didn't make up any time. We were also stopped at Maindee curve to allow a Chester bound stopping train in front of us, which clearly infuriated the driver as we did have time to get ahead of it. To add to the ignominy, one of the buffet car's windows was bricked at the signal stop, cracking the outer glass.

We were able to accelerate hard enough between stops to pull back a few minutes and made the Wolverhampton line before it closed for the night. All that was left was to call at the outward stations and I left at Codsall.

Verdict? Quite easily one of the most enjoyable tours I've been on. The MkIII's definitely make it work as an excursion and the experience will get better as Adrian and his team acquire more stock and bring the MkIII's up to scratch. Adrian and his team are very gracious and generous hosts and it was good to see the train pretty full and people happy. For me, it's the small things that made it work, such as handing out unexpected freebies like cakes and sweets, at seat service for those who needed it and nothing appeared to be too much trouble. The buffet stocked bacon rolls, toasted tea cakes, cream teas and Cornish built industrial strength pasties - if you wanted 'em, you could have 'em. It's detail like this that brings you back for more - and nobody seemed concerned about the late running.

Will I be doing more? You bet. Adrian - my wife is asking for a pair of Class 87's to Scotland please. Soon as you like...

....um, why no mention of the cow you won in the raffle Mark?

Timings (Booked Only)
(from Heartland Rail)