Notes :
(1) Additional stop made here as this station was nearer to the hotel.

Having not been out to Portugal for over 18 months, it was high time for another visit. The electrification projects on the Algarve and Covilhã lines have brought many changes and seen the demise of a lot of diesel hauled turns, so we needed the "carrot" of a decent tour to entice us back.

Following a pleasant day increasing our 1401 class mileage and admiring the scenery, we took a local electric unit up the hill to Campanhã station for the start of the tour. This duly rolled in with 1969 at the helm as predicted the previous day (it had been seen at Contumil depot being cleaned) so it was a winning start. The plan was for a spin down the electrified main line to Entroncamento where 1969 would be exchanged for a 1551 class (built by MLW, the successors to ALCo, hence the name of the tour).

Nothing really to report for this leg of the journey - 1969 was loud, as expected, and a few photo stops were enjoyed in the brilliant sunshine. At Entroncamento, 1969 gave way to an equally clean 1552 and we continued south with another photo stop at Santarém as we headed towards the day's highlight, crossing the 25th April Bridge across the river Tagus. A few heads were turned as we noisily negotiated the Lisbon suburbs, but the actual journey across the bridge was rather subdued. 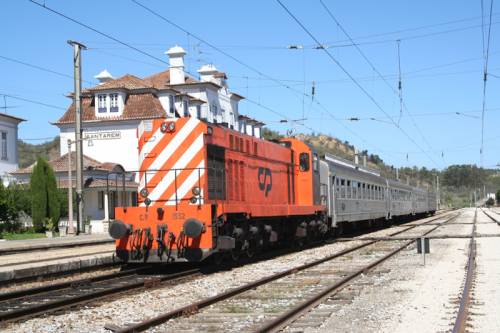 Today was to finish rather early at 15.07, despite going to Setúbal the long way round via Águas Moura, complete with a photo stop at this closed station with it's one coach dirt platform. I believe that there was a plan was to have a trip to Barreiro with 1805, but this was not possible due to the fact that nobody had ownership of the loco at this time, it is due to be handed over to the National Museum at Entroncamento next month (October).

This morning started with a brisk walk, our hotel was rather further away from the main station than we had been led to believe. The stock was parked in one of the loops so some of the party (including ourselves) made a beeline for it in order to choose our seats for the mornings aural assault. 1565 turned up as we were getting settled so it was all out again for photographs, before rejoining to scoop in a few hundred extra metres on the shunt move.

Unfortunately 1565 was graffitied on one side in contrast to the two clean engines we had yesterday, but it was hoped that an opportunity would be available to phot the "better" side later. Once we set off, 1565 appeared louder that 1552 to my ears so a good journey down to the Algarve was in prospect. The newly laid track ensured that a smooth and speedy trip, apart from a couple of permanent speed restrictions that could not be ironed out and a stretch near Ermidas Sado which was still recovering from a derailment with many smashed concrete sleepers in evidence. As suspected there were a couple of photo stops which enabled pictures to be taken with the sun shining on the non graffitied side of the loco.

The run round at Tunes took a little longer than booked for some reason. It looked like the driver was having difficulty in parting the loco from the stock, but once this was achieved the rest of the manoeuvre happened quickly then we were off for a couple of hours in Lagos. 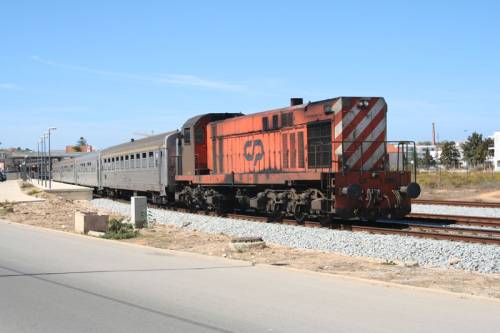 Tunes station was almost unrecognisable from when I first went there, but once we left the station the line had changed little apart from a resignalling scheme which had dispensed with the "red caps" at the crossing loops. A further change was that there are no 1401's in evidence down here now, all the local trains we crossed were 0600 class units. Lagos station had been moved around two years ago but only now were CP getting round to providing a new station building, which entailed placing a temporary passenger walkway across the tracks protected by sleepers chained to the track. These gave an indication as to the lack of hauled services down here as there was no way that a loco could run round it's stock with these in place, however a man had been dispatched to remove the sleepers so that our engine could run round. Even so it was a tight fit for the MLW, the buffers were about one foot from the walkway with the rear wheels clear of the points.

There were two hours to sample the delights of a very sunny and hot Lagos, made reasonably bearable by a brisk breeze. Sitting on the beach or in one of the harbour front cafés seemed to be the most popular choices, it was rather hot for too much activity.

Back on the train, it was relatively cool on the side away from the sun and even more refreshing travelling along with all the windows open listening to the thrash. 1565 was clearly audible from the back of the train as it tackled the steep gradients on the northbound run, an excellent accompaniment to the dinner being served.

Onto the Sines branch and the loco was still thrashing away and somebody made the comment that "the driver can smell the wine". Whatever the reason for his haste, we arrived at Sines 11 minutes early, at the same time as our coach turned up to take us to the hotel. 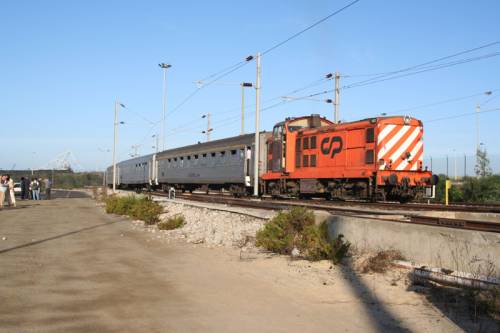 Today's entertainment started before we had even boarded the coach to get back to the train. Whilst waiting at the nominated place a loud bang was heard, which was quickly traced to a dark blue car and white 4x4 which had collided on the main road less than 100 yards from where we were standing. Fortunately there were no injuries but the front of the car was rather battered whilst the 4x4 appeared to be relatively unscathed – there was plenty of conjecture over the cause as nobody in our group had seen exactly what happened and the two vehicles had come to rest in a strange position.

Porto Sines coal loading terminal must rank as one of the more unusual places to board a tour. Imagine an operator applying to Network Rail for a tour to terminate in, say, Avonmouth Docks and the passengers to disembark and be transported away by coach and return again the following morning to rejoin the train…. I think not!

One minor issue this morning was that the train was stabled on a road with a steep ballast shoulder, no problem just shunt it across to another track where it was easier for the less agile members of the party to clamber aboard and no need to detrain those who had already managed to haul themselves into the coaches.

Leaving Sines there is quite a gradient away from the port, but the four coach load was never going to tax 1460 unduly, however it did sound superb despite the 1998 works date and the pronounced droop to the short nose end – no doubt the legacy of a heavy shunt at some stage in the intervening years. Photo stops were taken at São Bartolomeu on the branch and Coruche, but it would have been nice to stop at Poceirão to view the Freight sector’s depot where there was a good selection of power on shed, which appeared to make a nonsense of the oft quoted lines that the reason PTG can not have freight sector locos during the week is that there are none available. In fact 1460 is a freight loco so maybe we might just see a change of policy in the future.

Another excellent dinner was taken before we arrived at Entroncamento for our final loco change and a visit to the works and shed or museum. Most people took the opportunity to have a look round the works and shed a short coach journey away, a pity that the works shuttle with the Allan railcar trailer no longer seems to be in use. We were allowed to wander freely round the complex, which was much appreciated and yet again there were a fair few freight sector locos in evidence.

Back at the station 1943 was just backing onto the train. Being passenger sector it was probably dud for most people on board but that was not important, much more relevant was how much noise would this beast produce on the climb into the hills and would we actually make it to Porto non-stop. As there were a few minutes to go still, a quick dash was made over to the museum to view the items parked round the turntable but they were all covered by tarpaulins. In the meantime 1460 was noted trundling round the other side of the station on the breakdown train which duly propelled back into the freight yard to deal with an unseen (to us) derailment, it looked like the Lisbon area would not be getting their loco back straight away then.

1943 did not disappoint on the run northwards, the thrash was excellent and included a couple of bonus speed restrictions to roar away from, these things must surely be the loudest diesel engines in Europe if not the World. Coimbra and Aveiro were passed without stopping but shortly after the latter the driver eased off and it was not long before we started to encounter adverse signals. From being five minutes early at one stage, we gradually dropped back to being on time and then a minute or two late as we rolled along trying not to catch up whatever was in front of us. We did make Porto without stopping but, to be honest, the last stretch was a bit of an anticlimax after the earlier fast and noisy running. 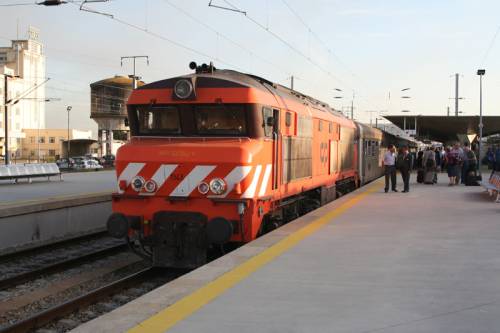 Back at Porto Campanhã, this time with 1943 (photo : Janet Cottrell)

There were a few local enthusiasts to witness the unusual sight of a 1931 at Porto Campanhã, where there was enough time for a couple of photographs and a visit to the ticket office for an IC reservation before joining the 1401 roadshow for a quick leap to Paredes and back to round off an excellent few days.