On paper, this tour had a great deal to recommend it; huge mileage behind an English Electric hero, spectacular highland scenery in summer and the company of the legend-in-their-own-compartments, the CFPS. Well after a summer cruelly mauled by a vengeful jet stream, autumn had other ideas. After a Friday of giving summer a vicious kicking, autumn rammed in the dagger with torrential rain across the whole of Scotland. Nevertheless, you don’t turn out for a forty because you enjoy sunbathing; you turn out for the thrash and did we ever get it.

Well weak we are, and daft too since a good many appeared at Birmingham New Street at stupid-o’clock for some vintage 50 performance up the WCML. What a way to get kicked off; Hood almost sounded like she was laughing, so easily were the seven six MK1s and one MK2 moving. Time was kept well enough, the gift of having a nervy EWS crew running your train. 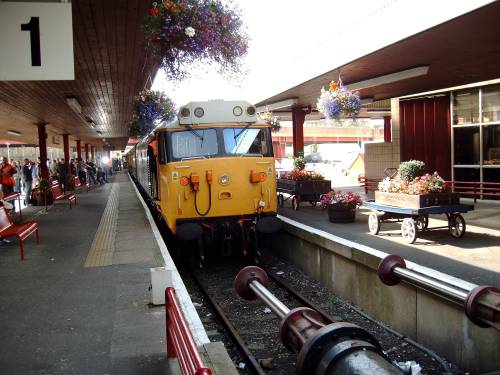 By Bradford, rumours of the thrash to come were reaching fever point and the resultant wedge in coach A will go down in history. If they were excited when we pulled in, my lords they went nuts when we pulled out! 145 erupted like Vesuvius and positively threw us to Leeds. After a quick photo stop in the capital of Yorkshire sophistication, the driver discovers notch seven. As if told she’s being scrapped tomorrow, he sets out to break 145 in style. But she simply shrugs and asks if that’s all he’s got…flying through Church Fenton for example, we thought we were coming off the rails! After reaching York in five minutes (well it felt that quick), we took lunch with a Yorkshire pint or six and caught up wit’t Test. We knew we was int’ Yorkshire, ‘cause everyone int’ pub were talking ‘bout what great batsman Geoff Boycott were…

Back onboard, a look at the timings to Edinburgh got us quite depressed; the schedule was slacker than a media-studies student yet no time in Edin for a drink! But she moved well enough and Darlington in particular was despatched in dreadful fashion; so by the time of the toon we were nevertheless well satisfied. Meanwhile the remaining CFPS boarded and a group of people who five minutes ago were enthusiasts, morphed into the Barmy Army. So, 145 opened up the thrash was hell, nearly getting us to line speed…what’s line speed on the ECML? As one tourer said “as fast as a Deltic wants”.

We were indeed denied beer in Edinburgh but still had to sit in a loop for forty minutes. What followed was a disgrace; unit after unit passed us in pathetic style, barely worthy enough to be called trains in our great presence. Ultimately we were forced to follow an all-stations from Dundee to Aberdeen so it was a god job the real ale bar was well managed by the ever cheerful Terry, a wonderful man without whom we would all be sober. However, this was a mere distraction and 145 kept us happy enough to reach our hotels totally clagged out.

By morning, the irony of staying 7 miles out of town, two minutes from a station we would be passing en-route, was not lost on us as we took taxis back into Aberdeen, where Station staff treated us to an hilarious impersonation of customer care. How we laughed. Anyway, we headed off north with a more sedate attitude based on sixty limits and a cold, drizzly Aberdeenshire day. Just before Elgin though, we beheld a site to make even grown men cry. Acre after acre of empty Whiskey barrels, longing for a malt to hold…the sound of wracking sobs only made the rain seem worse...

But by the time we passed Inverness, the rain was falling with a vengeance, making only the very hardiest of photographers venture out of a droplight. So we knew we there was only one place to go…the bar. Again. About fifty people had the same idea though and by Kyle there was very little beer left, which was a shame as the sun had come out and had we been sober the scenery would have been very impressive. Okay, it was still raining, but the sun had come out. So it was with blurred vision and wobbly legs that we arrived at Kyle and ran like demented things for the fish and chip shop. One good meal and a great chardonnay later, all and sundried returned to the station to find a helpful local had laid on a selection of rope swings under the bridge. Which was silly. They knew we’d play on them. 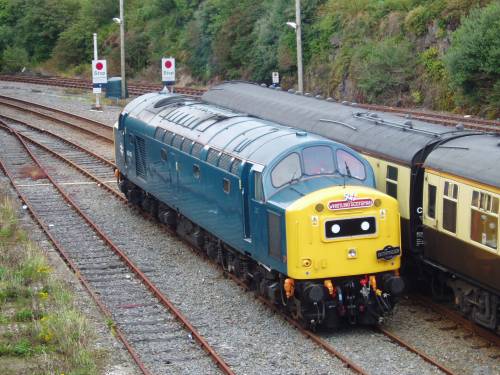 40145 running round at Kyle of Lochalsh (photo: Moggie)

Travelling back to Inbhir Ness in the evening was better than we could have hoped. We managed a good photo stop at Achnasheen, where only a few people fell down the ballast slopes. We noticed at this point a shifty bunch of characters in flash motors, seemingly tracking the train by road. We could only conclude this was MI5, anxious to spot 145 inciting Brush hatred in impressionable 158s. Our worst fears were borne out, as they raced along beside us, pointing cameras and microphones at an obviously very guilty loco. They seemed to arrive everywhere before we did, lining the hills with weapons raised. And just when we thought it couldn’t get any weirder, a man seeming to be his own railtour wandered up the train complete with massive steel headboard, offering it to frightened passengers for “fifty pee or the promise of a kiss”. Neither was forthcoming, even though a full VAT receipt was promised.

We should say that by this point most aboard were knackered; wrecked, tried and finished. We really needed a stop over so we were begging for Inverness to turn up on time, but instead we drifted past! A helpful Cornishman (we think he was Cornish) told us this was for Operational Reasons – whatever they are. What this meant was an overshoot of the station followed by a perfect Reagan/Carter handbrake turn back…we all thought we’d be gently pushed back but got veritably shoved into platform 2! All still alive though, we alighted and most hobbled down the road to the Black Friar, were Deuchars IPA helped us tolerate a Bruce Springsteen impersonator singing from a stance so heroic, we thought his trousers would surely burst.

Approaching the taxi rank, an illuminated sign offered “Tourist information”. It read, “You are Here”. Thank God for that, we thought we were lost. Further on a pair of kindly community door supervisors (that’s bouncers to you and me) ‘helped’ a very drunken man into a mini-cab, whilst protesting to the driver that it was “okay, he’d got money mate”. Not ****dy likely, mate, came the driver’s charitable reply. To cap it all, our intelligence network (Guests at the Whetherspoons lodge) were reporting a ruckus of Glaswegian proportions kicking off, so we all escaped to our billets. Ah, Highland hospitality…

Morning came in yet another downpour and we went south. The very brave and the very stupid (most of us) hit the droplights for some thrash, and were treated to the kind of exfoliation normally only available from boiling tar. But it sounded great, so we suffered for our art and have the videos to prove it. Slochd and Druimuachdar  were dispatched with super thrash, but is somehow all seemed muted. Collaring a CFPSnik gave us the answer; a new turbo, fitted in knee-jerktastic style after the last outing, had dramatically improved performance but taken the edge of the engine note. Well, you can’t have everything.

Perth gave us some good pictures but we were all really looking forward to the Forth Bridge. Queues for line-side windows had reached theme-park proportions, so imagine our delight when a possession forcing single-line working pushed us against the parapets. Grrr. Ah well, at least we’ll have a stop in Edinburgh. Except the possession killed it off and we stopped just long enough to drop off before being away again. Looped at Dunbar we waited for some plastic to overtake us but otherwise enjoyed a very fast run back to the Toon. But no-one cared because we had bowled Australia’s 2nd Innings out and needed 129 to win. By York, the weather had dramatically improved but reports of a classic five-wicket collapse reached us, leaving us only four to win with. Once we were convinced of our doom, the entire train invaded the main concourse newsagents, which could not cope and descended into anarchy. Fortunately England didn’t and won the test by three wickets.

Our old Friend Hood returned although many of us couldn’t remember why she was familiar…Friday seemed such a long time ago. But she did what she does best and positively hammered us back to Birmingham, despite some poor unfortunate at Stalybridge trying to pelt us with slabs (he couldn’t pick them up though, so he was bound to fail). Birmingham finally rolled around only six late, after a truly legendary weekend that will be very difficult to follow.