How many of the passengers on this tour I wonder were heard to say at some stage "I'm getting too old to do overnights"? Quite a few I'll guess...at various stages I was one of them! With past history of railtours such as this which begin life advertising a number of freight branches but turn into something far less interesting by the time of running I, like some others, was a little reluctant to book immediately however the prospect of 24 hours in standard class meant a booking was put in to ensure first class seating was obtained.

Amazingly when the tickets were sent out it was confirmed the tour would run as advertised i.e. all the advertised branches making it through the planning and timetabling process! Only significant change was the loss of EWS 37's in favour of a DRS pair...again, with past history knocking on our door that wasn't a bad thing - we didn't want to end up having the tour messed about by having locos incapable of making it to the end of the journey.

Having been on holiday I planned to make a day of the Friday and travel up by rail and do a Centro Daytripper during the day then drop back to Birmingham International for the evening departure. When I checked for train times home from Birmingham International on Saturday however I realised it was a bus to Rugby so what would probably be a long and frustrating journey which would be the last thing I wanted after 24-36 hours out and about. Plan B: Lift organised with a friend who would be passing by on the M1. Arrival into International was early enough to permit a wander over to the airport and a look in the Ian Allan shop - not much available in the way of railway books but still interesting.

We arrived onto the station just before 66036 rolled in with the train. 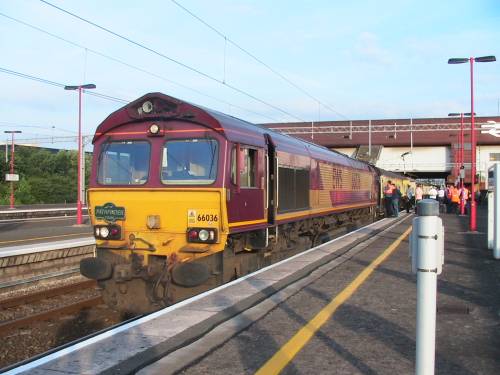 66036 waits time at the start of the tour at Birmingham International.

We took our seats in the leading first class coach (second in formation behind the staff/brake coach) and settled in for the journey northwards. Occasionally the 66 could be heard but, as is the norm, they are just a number to underline for haulage rather than an enjoyable thrash. Various travelling companions joined us as we headed to York via Birmingham New Street, Wolverhampton, Stafford, Crewe and the Pennines. We pulled into York a few minutes early and just before midnight. Four of us went out armed with the gen on food places still open and got "something" (being the appropriate word) to eat at a kebab shop round from the Maltings pub. Have to say it's the first kebab shop I've come upon with a security guard on the door!

Back to the station suitably refuelled and the DRS 37's were noted to still be sat in the Harrogate loop bay platform where we'd seen them on departing the station about half an hour earlier. At least the 66 was off the train. The 37's duly appeared and were hooked on....then unhooked individually and run off the train again. Huh? Turned out the drivers door on 37029 was locked and no-one had a key! Suitably re-marshalled we set off into the night between 15 & 20 minutes down but under no illusions we would soon catch that back with the timings we had!

Not much to say about the night thrash over the north end of the ECML...37's certainly performed well. I awoke at Millerhill to find us almost an hour early, though much festering in the Millerhill area got rid of most of it. I was awake to see my first bit of required track, Whifflet South Jn to Sunnyside Jn, with some extra value as we were held at the latter junction (still running early!). After threading our way through the Glasgow suburbs we arrived at our first freight branch - Deanside. A slow run down and hopes of seeing any of the shunters there were dashed, only one EWS 08 being seen and even then the number was not visible (n.b. from Website sources listing current 08 locations it was probably 08698). At the end of the line down the 37's ran round and we set off back along the branch, with more pausing to stop us gaining time on the slack schedule.

At Shields Junction we were routed along the very rare "through siding" to Bridge Street Jn on the approach to Glasgow Central High Level. A rather rapid stop on the approach to the line however (at what was reported to be a green signal) caused much discussion. Those nearer the front commented there was a ground signal which was at first in our favour then subsequently not. Driver not passed for route...change of mind...? I was later told the low morning sun had made it almost impossible to verify the signal aspect, making it appear "off" as we approached whereas this was not actually the case. Whatever, the situation was soon resolved and we duly set off over the "through siding" route into Glasgow Central. 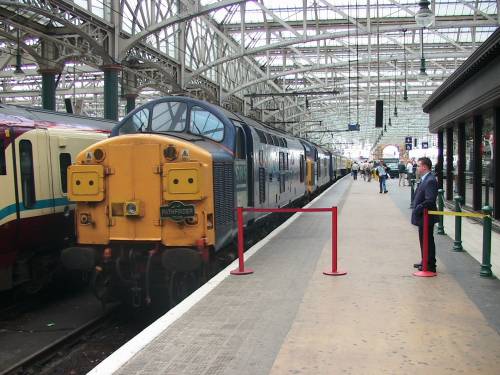 Quite a few of us headed over to Glasgow Queen Street to do some Turbostar spotting, the station staff there being kind enough to allow us all onto the platform (though a couple of suited bods did come along and queried some of our number as to what was going on). After scoring a few new ones it was back over to Central to find 66045 duly bolted to the front of our train and ready to get us re-started. 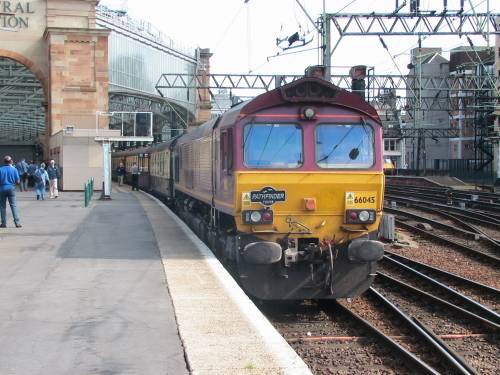 66045 at Glasgow Central, assisting engine for our next two branches.

66045's first run was only as far as Polmadie where we reversed to then thread our way through the maze of junctions south of Central and gain the line to Kilmarnock. Shortly after passing through Kilmarnock we took the freight line to Riccarton, making it to the gates of the oil terminal at the end. Re-tracing our steps to Kilmarnock station we then reversed and headed for our last freight branch of the day, Knockshinnoch Washery. This was also duly done, making it to a level crossing just short of the Washery. Much interest was shown on the way down as there is a brand-new branch going off this one - the tour brochure confirming that went to the Greenbank Open Cast loading site....apparently not cleared for passenger trains :-( 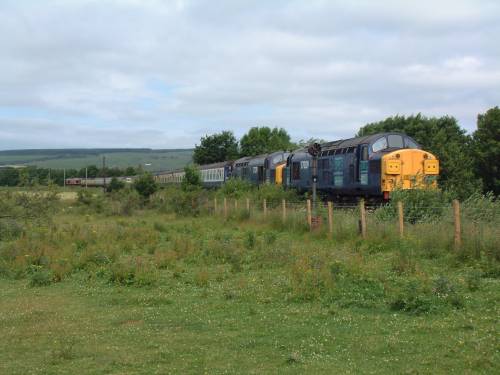 Our train on the Knockshinnoch Washery branch (photo: Rab Jacobs).

Re-tracing our steps we arrived at Bank Junction to reverse....but carried straight past. Apparently, though timed to reverse at the junction this was not possible so we headed about 10 miles back to Mauchline Jn to reverse. This manoeuvre put us about 15 late but once again it was not a concern looking at the timetabling homewards.

A canny run to Carlisle where the 37's were dropped in favour of a rather loud 92027 - another winner, my third of the day with just the 37's being had for haulage in the past. 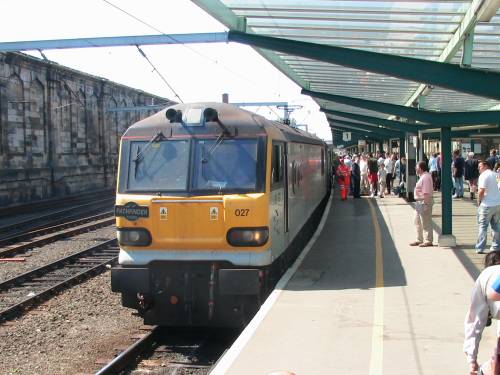 The 92 made very light work of our train and we arrived into Crewe about 15 early where we swapped to 66232, yet another winner. The shed kept up the pace and arrival home at Birmingham International was a whopping 34 early - quite a rare event for an enthusiasts railtour!

Verdict : Superb tour, well done to all involved for making it happen "as advertised", the exchange of 37's from EWS to DRS not spoiling it (in fact, many scored 37229 so it added to their day I'm sure)! Thanks to Steve also for being my chauffeur between Northampton & Birmingham!