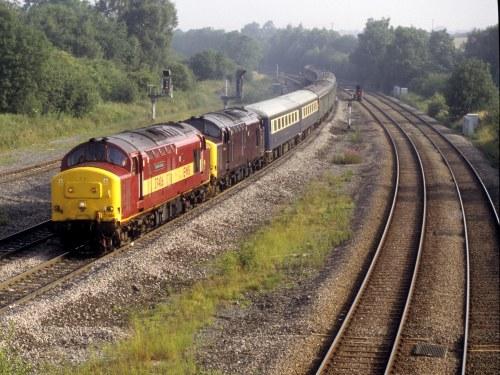 The empty stock ran from Old Oak Common on time and ran round.

The railtour ran on time with non-stop between Sheffield and Birmingham New Street has been done on both way!

During non-stop run, saw Vintage Trains 'The Yorkshireman' railtour hauled by steam 4936 'Kinlett Hall' being stopping at Derby on platform 2 while the 37/4s ran through platform 4 at same time at 08.18 which was on time.

On return, left on time at 16.05 then went through Machylleth without stop and very slow for allowing Network Rail signaller drop off that who used to work at Aberystwyth using ground frame during run round, then went on to Talerdigg Bank climb up and stop for the same 158s - 158840+819 on 14.33 Birmingham New Street, one hour late!

Next stop at Welshpool was waiting for next 158 service at 17.55 from 16.33 Birmingham-Aberstwyth, 158845 came 5 mins late, then fast to Sutton Bridge Jct then stop at English Bridge Jct, then signal given and lovely to see the 37/4s on the Abbey Foregate curve with giant Shrewsbury signalbox and went non-stop to Birmingham New Street, seeing the plenty of 87s, 390s with 57/3 drags and 47316/714 at Oxley Sidings and went through Wolverhampton new platform 4 and finally arrived at 19.26 on platform 1, half hour early due to slack 19 minutes pathing stop at Wolverhampton that has been ignored!

After set down at Sheffield on platform 2, non-stop to Worksop and arrived on time at 21.54!

After set-down passengers finished, then the 37/4s pushed into Worksop Yard and switched off for the night.

Verdict:- I enjoyed the day out and pleased with 37406 is full ok following chaos on Pathfinder ' The Snowdonian I' on June 18th. Hot day throughout!