This tour was to run from Paddington (later changed to Euston) to both Whatley and Merehead Quarries as well as the East Somerset Railway at Cranmore. Traction was to be provided by a EWS Class 59/2 and a Mendip Rail Class 59.

A few days before the tour was due to depart it was decided that my dad and I would travel down from Scunthorpe to Slough. This meant a later departure than if we had gone to London to pick up the tour.

Friday saw me leave work utilising a few trains to get me to Scunthorpe. In the old words of the BBC news when announcing football scores “IF you don’t wish to see them please look away now”.

You can look back now at the page.

Saturday saw my dad and I depart Scunthorpe at 5am. Not bad as tours go. And we had a relatively easy drive down from Scunthorpe to Gainsborough, Newark, A1 down to South Mimms, M25 to near Heathrow where we saw quite a few planes.

Whilst finding our way towards Slough a Virgin Boeing 747 came in to Land at London’s Heathrow. The family expert on Virgin Atlantic was able to confirm what service it was, but I’ve now forgotten what it was!!!

Anyway we arrived at Slough at 8.15. A full hour and a quarter before the tour departed !!!!!!!! So time for a cup of tea. But before that, I lent the FGW people my schedule of the train so that they could see what time it left! As they said they had no prior knowledge of our tour departing.

Oh well, back on the platform HSTs, 165s, 166s and 180’s all passed through. And then a 59 (202 dud – had it on Heart of Wales tour from Sheffield) was spotted down in the far distance approaching our platform.

The tour arrived at 0940 with a familiar face driving, and departed at 0943 just one late.

We were on the slows all the way to Reading where we arrived platform 8 at 0959. 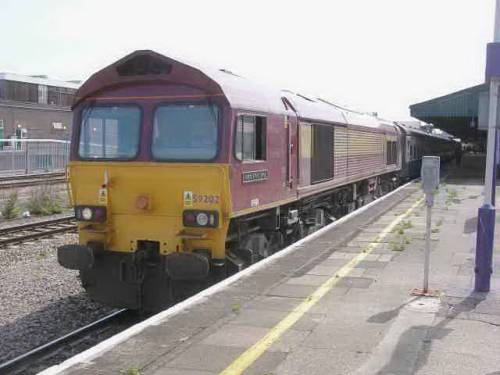 But we were to wait here for 15” to allow 3 trains to depart to Brighton, Basingstoke and one to Newbury.

We departed right time at 1015 and set off for the B&H to Westbury. At Newbury Racecourse we were due to be passed by the Paddington to Penzance service, but we weren’t, and carried on running to Westbury Down Reception (our first of 3 visits) where 59004 was waiting to be attached. A winner !!! Also in Westbury was 59205, 60030 and a few sheds.

We departed Westbury at 1139 and set off for Whatley Q (last visited in September 04 with Pathfinder Tours) and we were disappointed that we didn’t get far at all. We got as far as the loco shed. And for those of us who were on both the Pathfinder / Hertfordshire tours, we were glad we had been here before!

Well we set off again and headed back to Westbury Yard (Down Reception). People were wondering when we were going to go in to the up reception !!!

Well we reversed, and this time instead of going up to Whatley we carried on going and at East Somerset Jn we took the Merehead Branch. At Merehead Quarry Jn we took the line to Cranmore whilst viewing 59002 / 59204 / 59206 / 59103 plus a few more loco’s sat in Merehead loco depot.

We arrived in to Cranmore at 1400 (5 early) and awaited the kettle to take us to Mendip Vale. 5637 came in on stock, and ran round and the tea was brewing!!! Did anyone bring the digestives? We boarded and found a compartment for 7 of us. And the kettle brewed.

Moving on around 20 mins. And Jim and I found ourselves running through fields in order to get a photo of the Mendip class 59!

Anyway moving on another 50” or so. The stock has arrived in to the platform, and we’re reading to go!

We departed at 1635 and came to a stand at the signal protecting the branch. We went in along the Merehead Quarry branch viewing the 59s we saw before and took road no3 coming to a stand just short of the weighbridge. Hertfordshire announced the reason we couldn’t do the other side of the triangle was because the train was too long, and if we were to reverse we would have had to go under the loading bunker.

Anyway we were on our way back down to Westbury running early and we arrived in to the Westbury Down Reception at 1739 (25 early). However we departed at 1825 7 late! Whilst in Westbury we viewed FGW services, Wessex Services and a few shunting manoeuvres by EWS Class 66s.

From Westbury we passed through Warminster, Salisbury, Dean, Romsey and passed through Redbridge at 1917 passing quite a lot of Freightliner Class 66s sat in the depot or on the quayside. There was no big ship in Southampton today. Southampton Western docks anyone? Southampton Depot hosted quite a few 444’s as well!

Eastleigh Yard was passed and it was quite busy by all accounts. By Worting Jn we were 3 early (1955) and arrived Basingstoke 2000. But were held till 2011 for the Basingstoke to Reading service. We arrived at Reading at 2034 and departed at 2037 on the main lines. The tour was booked to use the Relief lines all the way back to Paddington. But in the end they were on the main lines till past Slough.

The tour arrived Slough at 2053 and we bode farewell to our party.

We visited the gentlemen’s room, and left in the car passing a gentlemen outside the car park who didn’t use the toilet.

We were soon on our way down the A4, M25, A1 and just before Peterborough I was asleep. Not before I’d witnessed a 365 passing over the A1 from Letwchworth, and a few more planes arriving in to London’ s Heathrow Airport.

We came off the A1 at Newark, and took the A47 to Lincoln, and the A15 to near Kirton Lime Sidings, before taking country back roads to Bottesford.

Arrival back at Scunthorpe was 0005 Sunday morning. So not a bad journey overall!

A big thank you to EWS, Network Rail, Hertfordshire Railtours, Mendip Rail Limited, of course Daniel (for booking tickets), my dad (for driving half way round the country!) and anyone else I’ve forgotten !!!

However, this not the end. Sunday 12th June was a very historical day for people in South Wales. Today for the first time in 40 years the Vale of Glamorgan line between Bridgend and Barry saw passenger trains calling at Rhoose and Llantwit Major. As a result Arriva Trains Wales put on additional trains utilising the Class 37s with Arriva stock.

At Cardiff Central I walked to Cardiff Queen St. And then saw to my amazement all 4 carriages of the loco hauled additionals were full and standing with numerous faces I’ve see before on Pathfinder Tours (and quite a few of their stewards were there too!)

We departed at 1603 and ran non stop from Cardiff Central to Barry. This is where I and a few others alighted and saw 73133 sat in Barry Depot. I made my way back to Cardiff and back to Tonypandy. A very tired man !!!