Past Time Rail
The Whitby Flyer

Notes :
(1) 66204 on rear.
(2) The originally rostered driver of the ECS did not have route knowledge for the Kings Cross incline so another driver was rostered - but it is reported he didn't turn up! As a result of the late departure from Wembley the train instead started at Finsbury Park rather than Kings Cross as booked. Passengers used the 07:56 Kings Cross - Hertford North EMU (313058) to get to Finsbury Park to catch the train which left 09.02 against the booked 07/52 passing time.
(3) Was booked via Hertford North but ran ECML due to the late running. Eventually got to Whitby 98 minutes late.
(4) 66074 on rear. 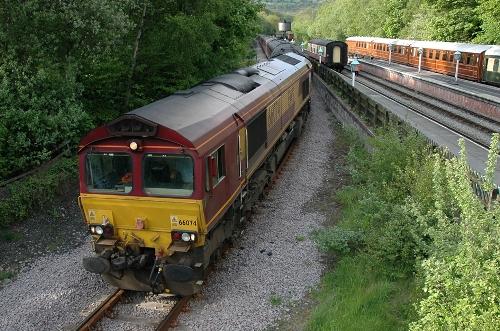 66074 arrives at Grosmont on the return leg (photo: Nick Blyth)