Notes :
(1) 37422 failed somewhere around Wigan and was removed at Preston.
(3) Carnforth Furness Goods Line refused on the day, no reason given on train announcement but believed to have been due to the train running late.
(4) 37427 on rear.
(5) 66159 on rear.
(6) Booked to travel via Avoiding Line again, but didn't due to 66 already being removed at Maryport.
(7) Also advertised as "The West Cumbrian Coaster" with various options for the "normals". Booked traction was for 2x37 Bescot to Workingon & return, with top'n' tail 37's for Docks and Maryport. 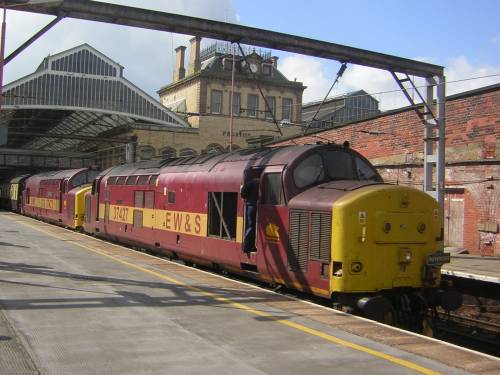 When the re-run of this tour was advertised I had no hesitation in booking as the line to Workington Docks was required – the only reason that I did not book for the original date was due to the fact that it fell in the middle of annual leave which had already been arranged.

The timings produced a dilemma, an early start to get to Barnt Green or train to Stafford or Crewe? Barnt Green was the chosen option as Murphy’s Law would dictate that the class 67 would be required if I opted to miss it. In any case the train option could leave me stranded if a farce ensued (more of which anon) and it would also mean a trip in a Pendolino, something which is at or near the top of my “trains to avoid travelling in if possible” list.

0530 on a Bank Holiday Monday and the Pendolino did feel like an attractive alternative to driving down an empty M40. It was worth it though when required 67025 trundled into the station, my first new “skip” since last summer, coach “A” was at the rear so it was to be a quiet journey north. We paused in the Goods Loop at Bescot to collect our tractors for the day which were 422 and 427 despite strong rumours that a pair of DRS 37/0’s were to be used. I had even heard some actual numbers being bandied about a couple of days previously, but somebody had decreed that 422 was to be re-instated to help out. There was also a tour from Newcastle to Oban which required a pair of 37’s today, not to mention the Rhymneys and the sleeper, things are getting very tight and it could have been this tour that missed out if there were not enough engines.

The weather was glorious as we headed north, picking up more passengers at Stafford and Crewe. At one stage we were 20 minutes late, but this was gradually being whittled away as people started making plans for the half hour stop at Preston. Around Acton Grange Junction a strange smell became apparent, a bit like a steam engine yet more pungent like….. at this point the debate was interrupted as the train came to a shuddering halt, somebody in the next coach having pulled the communication cord. A glance forwards revealed a haze of acrid smoke, the view from the window showed more of the same billowing from under the trailing bogie of the penultimate coach. Game over we all thought, so it was rather surprising when the train started moving barely ten minutes later only to stop again a short distance further along, the raised sides of the viaduct here were hindering examination of the offending bogie.

Ten more minutes and we were on our way again, probably to the platform at Bank Quay where the tour would be terminated thought the cynical. But no, after a slightly longer than booked pause to double check the offending coach we were off again. No doubt the people in coach “B” were relieved to keep their seats, at best they were probably thinking that the coach would be knocked out and they would have to try and squeeze in elsewhere on a fully booked train.

We managed to arrive at Preston without further noticeable problems, where many people dashed off to find sustenance in the reduced time available. As I rushed past the locos, the impression was gained that all was not well. This was confirmed on my return when it was announced that 37422 had failed in the Wigan area with low oil pressure and would not restart. As the conversation then drifted towards the location of the nearest GM product, another announcement over the tannoy proclaimed that the dead loco was being detached and 37427 would be going forwards solo (again – see “Aggregated Syphons” on 12th March 2005). Departure from Preston was exactly an hour down, but some time was clawed back fairly quickly when we did not go into Barton & Broughton Loop as booked, apparently the wonderful Pendolino service was in farce mode as well which did help matters.

Most people’s attention was now focussed on whether we would actually get to do the Workington Docks branch now that we only had one engine meanwhile, back in the present, the Furness Goods line at Carnforth was missed out – allegedly because we were running late although that sounds a very poor excuse to me.

One benefit of being in a coach load of cranks in this modern age is that there is nearly always someone who can “get the gen”, in this case it was that 66159 would be sent to Workington to Top and Tail us over the Docks branch. Good, a winner – as long as it did not work the train back to Bescot!

Following stops to drop the “normals” off at Ravenglass and Whitehaven, we arrived on the Reception line at Workington some 35 minutes down. Sure enough, 66159 was already there and coupled to the north end after 37427 was run round to the south end, much to the relief of everybody in coach “A”. As we set off on the short distance to Derwent Junction, our coach filled up BLS style as we were at the business end on the most important piece of line. We went past some china clay slurry tanks, past the site of the coal unloading apparatus (yes I do remember coal trains here !) and kept going almost to the buffer stops in the head shunt, further than the BLS tour which was the only other tour to have been down this line in recent years. Somebody had a very large scale map and worked out that we had reached a point roughly 960 metres from the junction, the end result was the same in metric or imperial measurements – we couldn’t have gone any further !

A trip to Maryport was in order as this was the first place that the train could reverse. It was decided to drop the “shed” off here which cost us a few minutes, but this would be offset by not calling at Workington where the second class 37 was booked to return to the front of the train. En route we passed a gymkhana where it was anticipated that the thrashing tractor would cause mayhem amongst the horses but they must have been made of sterner stuff, only one animal showing minor displeasure at this unwelcome intrusion. By now it had started to rain, typical when we wanted the windows open to savour the thrash and there was plenty of that despite being on a secondary line.

Helped by some generous timings, we were within three minutes of right time at one stage, only to lose a few minutes at Foxfield, presumably waiting for the block section ahead to clear. A sterling effort over the bank near Ulverston saw a couple more minutes lost and as we rolled into Carnforth the fire bells could be heard as a shrill descant to the rumble of the idling engine. If there was one class of loco built to be thrashed and still keep going regardless, it has to be the class 37’s.

A further short break at Preston enabled a quick dash to the station buffet or more pictures to be taken, and we would have left on time if it was not for a late running Voyager – an unthinkable scenario when we were here nearly nine hours previously. The driver had changed here and he was not going to spare the horses as we charged southwards in pursuit of Mr Branson’s shiny toy. Normally I am the first to moan about slack timings, but in this case they actually helped as even with one class 37 and 13 coaches in tow, we actually started running early. This was too good to last though and we were checked at Winsford, then outside Crewe and Stafford before finally bidding farewell to 37427 at Bescot some 17 minutes late. Hopes of getting a different class 67 were dashed when 67025 buffered up and we lost more time here when there were problems coupling it up, I believe that an emergency coupling had to be procured from the other end of the train. An uninspiring run back to Barnt Green did not see us pick up any more time but frankly I was happy to get off by now, glad that I was not going all the way to Cardiff.

Apart from it being a long day, it was an excellent trip although I cannot help wondering how much longer we can enjoy class 37’s on the main line bearing in mind that as well as 422, the pair on the North East Railtours trip also had problems and had to be replaced by a class 66. It was definitely a case of schadenfreude when that news filtered through, it could easily have been us instead though.

Mileages are as shown in tour brochure ( * - estimated distance only)