5 different NoHabs out today in Europe, 350 miles for £17 seemed to be the best offer by far. Paul Johnson and I arrived from our IBIS at Nyugati station to discover our train in platform 9, the 7 coaches steaming away quite nicely.  After visiting the station supermarket, we asked the train manager for our reserved seats. We were told coach A at the front, seats 81 to 84, not coach D as we were expecting. Shortly, Pete Callaghan and Brian Foster joined us from their IBIS. 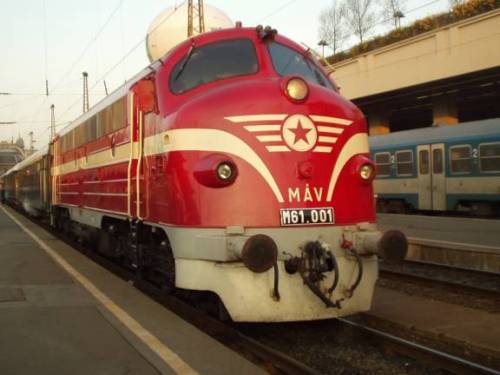 This was to be a straight run to Aszód, Miskolc, Hidasnémeti and Košice. As MAV Nostalga wish to protect their locos, the drivers only notch up slowly, so no hard acceleration takes place. Due to limitations on the stock, maximum speed is 100 km/h, but a lot of time we are cruising at this speed.

As Ferenc Joo had only reserved our seats, it’s not long until the train manager comes along to ching the 6000 HUFs for this trip. He also advises us that the train will run into Košice depot for the open day.

Breakfast is taken is the restaurant car, ham ‘n’ eggs with a cup of tea, 870 HUF, or £2.50. One moment of amusement was watching Brian take ten minutes to photograph the ISBN number of my Eastern European phrase book. It would have been easier just to write the number down! All too soon we reach Hidasnémeti. Photos are not permitted as this is a border grip, our UK passports barely being glanced at.

On arrival at Košice, the NoHab was run round and we trundled down to the depot at 5 km/h.

Time was spent photographing the exhibits, as the engines in turn trundled from the roundhouse, spun around the turntable and back into the roundhouse. All the kettles were in steam with kids clambering about. H+S? What H+S?

We tried to do the heritage unit up to the station, but ended up walking it, with engines still moving between the shed and the station. What H+S?

A few years ago the Plesivec stoppers were booked grumpies on log trailers, so a fill in move to Barca was devised. An excellent move, 812 for 812. These are a similar ride to our 14x.

Lunch was taken in a restaurant in the city centre, with a winning beer for me, Zlaty Besant dark, trams being used for transit to and from station. We then returned to the depot to find our draw back engine attached. 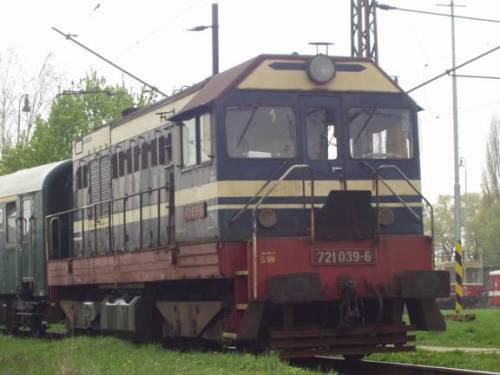 Departure time was advertised as 16:15 from the depot and 16:55 from the main station.  Time was needed to visit the excellent off-licence on Košice station. Problem being we didn’t leave the depot until 16:39, then the 5km/h trundle up to the station, arriving 16:52. A quick jog to the shop and time for fun and games on the order. 11 Šarišh darks and 1 Topvar Xmas light. Problem only 4 Šarišh. OK, 7 Kozel darks please. No, that’s the light, but then they offered Zubr dark, but only 6! We had managed to clear the shop out of dark beer, something Pete and I had done in Bardejov 2 years previous. Easily made the train as the Hungarians were still boarding. 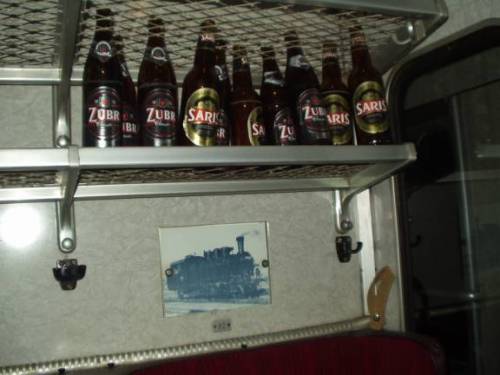 And not a light beer in sight! (photo: Peter Callaghan)

A steady run back to Budapest at 100 km/h, drinking beer and another visit to the restaurant car. The dinner menu was one item only, Spaghetti Bolognese, about £2.70 for a large dish. Snag was using a knife and not a spoon.

Arrival in Budapest was at 21:25, ten minutes early.

What an excellent and cheap day out! Many thanks to MÁV.