Notes :
(1) Tour was originally booked to visit Southampton Western Docks and the Eastleigh Loop but both were refused prior to the tour running.
(2) 57005 on rear. This loco was in fact taken "in error" by the driver from Southampton, being due an exam. In Southampton UGL it was replaced by 57002.
(3) 60091 on rear.

This tour was originally due to feature both the Eastleigh depot Loop (Weaving Weasel tour) and Southampton Western Docks.  The fact it was due to traverse the Southampton Western docks branch was the clincher for my dad and I. Otherwise it would have been a nice empty track-requiring day.

A few weeks before the tour was due to depart gen came through that the freight lines were not now to be done, and Weymouth was the destination instead!  Thanks to Selby for that!

Anyway a few days before the tour I departed South Wales (with plenty of freight trains out and about I can tell you!!) for England’s green and pleasant lands, those volcanic mills and Scunthorpe Steel Works.

So at 3am with gen and timings (thanks to mark & Dave for them!) we departed for Derby.  We duly arrived at Derby quite early so was there in plenty of time for the tour.  While walking up the train it looked like the locos were on the train as something was clagging well and truly!  However, it turned out to be the generator car.  37401 / 37406 shunted on to the train.  Both were dud having had 401 on the north Wales coast, and 406 on the Fort William Beds previously (around 4-5 years previously).

At 5.04 we set off for Salisbury (calling at Burton on Trent, Tamworth, Birmingham New St, Barnt Green and Cheltenham Spa).  At Swindon a mate of mine text me to say he was joining the train at Southampton in order to catch the class 60 which was the only loco he wanted.  Hmmmm.

After checking the tour brochure it turned out that the class 60 wasn’t coming on till Salisbury and not Southampton!!!  Some frantic calling / texting told him to get his body (replace with other word) to Salisbury.

From Cheltenham we went and took the golden valley route to Swindon, and then took the GW main Line to Reading West Jn, and across the Reading avoiding line down to Basingstoke.  At Reading depot we saw numerous 165 and 166s.  Oh, I forgot to mention on Didcot Parkway FP was sat 56091 Stanton!!!!!

So where was I, oh yes we passed through Basingstoke 7 early and our next route was the LSWR to Salisbury via Andover.  We got earlier and earlier on our schedules and passed Andover 0907 18 early and we then arrived at Salisbury platform 4 at 0930 15 mins early. 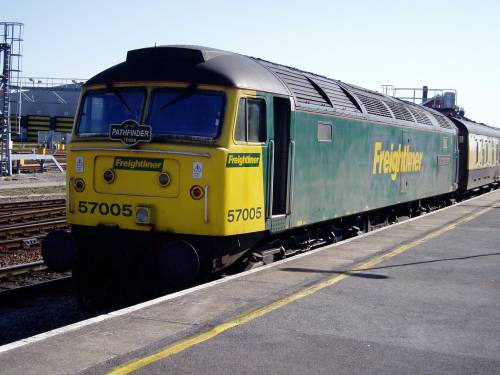 57005 on the rear of the train at Salisbury (photo: Simon Edwards)

My mate had a plus 6 connection of his South West service on to the charter.  Photos were taken, people paid visits to the breakfast places, and the unit depot and people just chatted away on the station.  And all while this was happening; someone was desperate to join the tour.  Well at 1040ish the doors were closed, the whistle’s blew, but his unit managed to get in to the station and with it, his body managed to get on the charter before we departed.

Daniel walked down the coach we were in to great applause.  Well done for your perseverance! 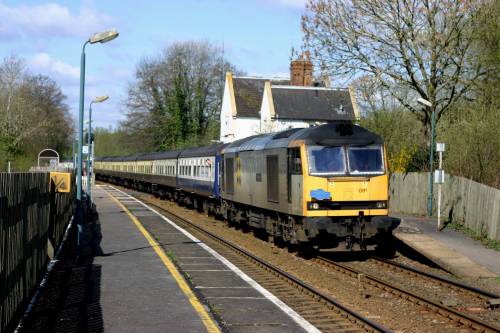 Whilst sat in the goods loop we got a good view of how not to park a car by the old woman.  Who did so many manoeuvres we were all surprised that she parked the car!  A few bumps nearly did occur though during this time.

Wait a moment, wasn’t Southampton where Daniel was going to jump on to the train??? Hmmm, I think he’s a lucky person I told him to get to Westbury! Otherwise he would have been well and truly bowled and his day would have been dire (but £60 to the wiser!).  As we never even got to the platforms at Southampton station!!!

All the time we were sat in the goods loop 158s, 450s, 444s and 442s, and anything else disappeared past our carriage windows.  And all the time over in Western Docks sat the big ocean going liner “Arcadia” What a beast of a ship!!! This is one reason we were not able to go in to the docks I understand.  Pity.  It would have been interesting heading alongside a great liner like that.

We departed off the Goods Loop at 1215 and set off for ours seaside afternoon at Weymouth.  By Redbridge we were 14” late, but there was plenty of pathing time as we were to follow a Wareham stopper service.

By Bournemouth we were 1 early, Branksome 1 early, Poole 1 early and the shopping street looked rather amused by us passing through.  Can I point out the 57002 was clagging well throughout the journey to Weymouth.

At Signal PO46 we were sat 6” before continuing our journey in to Wareham 3 early and finally arrived in to Weymouth platform 3 at 1353 one late. 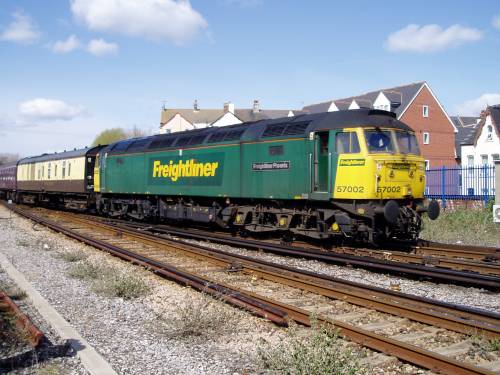 Well our first object was to go and get some chips.  This was duly done, and then a group photo was taken at the buffer stops on the quay branch.  We then went in to a pub for a few mins before walking back to the station.  A few minor collisions were avoided before we managed to get back to the station to find the stock not in the station yet.

At 1555 we set off back for Derby.  We were late due to problems propelling the stock back in to the station.  As the stock was brought in the driver stopped the train, people thought that this was the sign to get back on.  However, the locos were still straggling the junction and were not behind the signal.  So they had to shut all doors again and move back even more.

Our return route was scenic by running via Yeovil, Castle Cary, and Westbury, bath Spa, Filton Jn and Bristol Parkway before joining our earlier route at Standish Jn.

At Maiden Newton we were held for the Bristol to Weymouth Class 150 to come off the single line, and then at Yeovil we were held for a diverted FGW HST before joining the main line at Castle Cary. 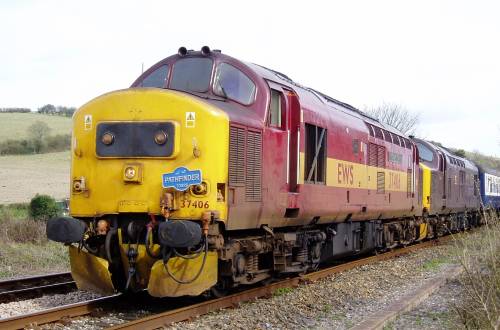 Westbury was passed at 1747 with 59204 / 59206 seen (206 required for haulage – any chance for it to appear on multi coloured tour please???) and then took the line through Trowbridge and passed through Bathampton Jn at 1808, we were stopped at B Sig 414 (North Somerset Jn) before taking the Rhubarb Curve to Filton Jn and Bristol Parkway.  We were one late departing Bristol Parkway, 3 early departing Cheltenham and climbed up Lickey with the 37’s not sounding to be struggling at all.  It was a well controlled ascend up the bank!  We departed Barnt Green at 2006 2 early, passed Longbridge (Rover MG RIP???) but were regulated in to Birmingham New St, and departed there 2 late at 2032.

An uneventful journey saw us arrive in to Derby at 2123 to pay for the car park ticket.  £7.50 for a day!!!  Hmmm, for that much money id expect a lot more than just a car park ticket!

Anyway, my dad drove back to Scunthorpe and we arrived there at 2300.  Time for bed.

On reflection what can I say??  Well let’s start with the performance aspect.  Timing throughout the day had been brilliant with a little slip of 10” late in Southampton.  But nothing anything more serious.  Loco changes went without a hitch, and the time spent in Weymouth was good.  Pity about the freight-track not being done, but Weymouth was a lovely alternative destination.

The company I kept through the day was good too. So good to see so many familiar faces.

One further note, it was time well spent rather than watching the Grand National, and princes Charles marrying Camilla. I think those that went on the tour made the right choice!

And next time Daniel, check with pathfinder before heading to somewhere for a loco you require to be certain!!!

Many thanks to Network Rail, EWS, Freightliner, Riviera Trains and Pathfinder Railtours (and anyone else I've forgotten to mention) for a wonderful and relaxing day out. Oh and thanks to those people upstairs for bringing us wonderful weather too throughout the day.