The first PFT tour of 2005 in Belgium saw Mercia Charters making a block booking on the tour. Advertised as the farewell to the green-liveried type 62's it would take a pair of these locos into the Netherlands - to Terneusen and some of the nearby freight branches on this exiled part of the country. The choice of locos was obviously limited on account there are only a handful of green-liveried 62's left in service but it would still be an enjoyable day out (if we could cope with the multitude of photo-stops that would undoubtedly take place en-route!).

My route out was on the Friday, via 90028 on the 07.30 Northampton to Euston "cobbler" and a slow run on Northern Line to Waterloo - problems on Victoria Line and a defective train on Northern Line slowing the journey somewhat and also meaning some rather overcrowded stations & trains and Eurostar to Brussels.

Time on arrival at Waterloo to scoop a few new units for sight before meeting up with some colleagues who were booked on the same Eurostar across to Brussels. Bit of a farce getting through the check-in as my ticket was rejected by the automatic barrier, so after 10 minutes of standing in a queue I had to join another one for the same length to get checked-in. Usual long delays getting through security and passport control so we had only a short wait before the train was open for boarding.

After stops at Denderleeuw and Aalst we pulled up at Merelbeke station. A member of PFT had already appeared to say there was no depot visit...but in typical Belgian style a group met up at the end of the platform and were then escorted across to walk around the running roads outside the sheds. Green-liveried 6219 got a lot of attention from the photographers, as did the 77's and even type 41 DMU's. Whilst the depot visit took place 6256 was run-round to the back of the train. 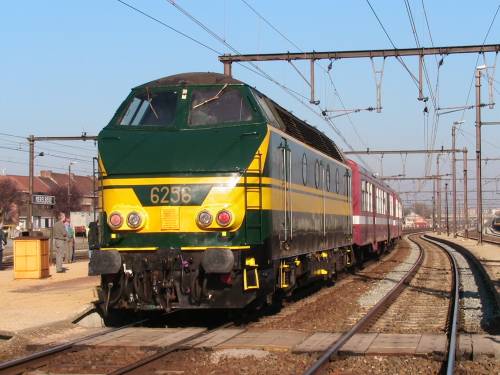 We then set off via the non-passenger curve to Gentbrugge, Gent Dampoort and northwards towards the small Dutch enclave surrounded by sea and Belgium. For the next too-many hours we experienced the typical Belgian railtour with photo-stop after photo-stop. Some were so close together I think PFT were holding a spot-the-difference competition!

Some new track was scored on the approach to Ertvelde as a stretch of the route has been relaid in a completely new deviation. A photo-stop was taken on here...of course! 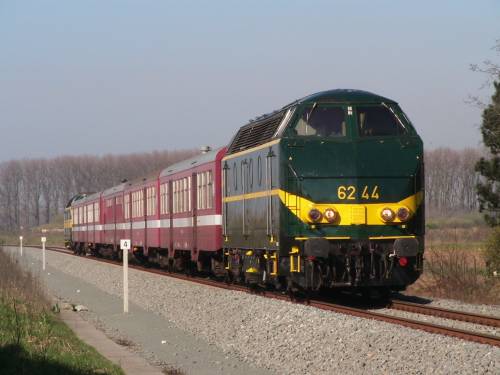 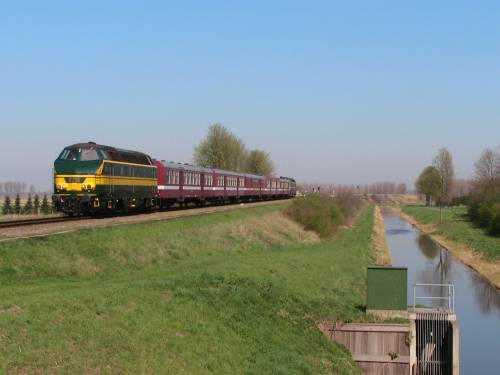 Short of Terneuzen we stopped and reversed to traverse the branch to Axel Opsassing. Many photo-stops were taken on this branch and, frustratingly for the track-bashers, we did not get to the end of the branch, simply reversing at the point we'd exhausted the photographic opportunities.

Another couple of reversals got me back onto new track, the Dow Chemicals branch from Sluiskil...but once again we failed to make the end of the branch. Strangely we did not even have a photo-stop a the reversal point!

We arrived early into Terneuzen which allowed plenty of time to photograph the 62's (moved around and posed at various locations - with no apparent risk to life and limb having both locos moving simultaneously round the site with passengers wandering about either!). Many cameras were also trained on the 3 ex-German Railways class 204's now operated by Railion which were sat in the yard area at the former station. Finally the 62's were paired up for the run back to Brussels. 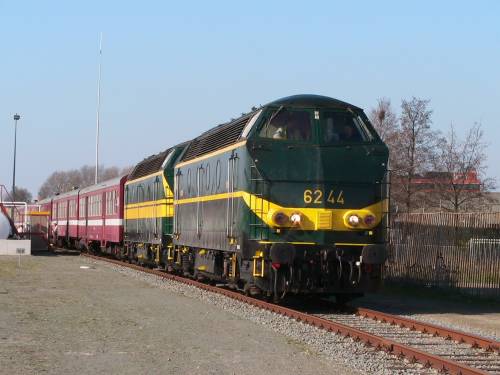 A 20 minute early departure suggested we might get home early to but a few more photo-stops and a long fester on the non-passenger curve approaching Merelbeke put paid to that, arrival back into Brussels being about 15 late.

All in all it was a good tour. OK, there were way too many photo-stops for mere British railtourers, but as the weather was really good all day it was bearable and some of the locations were quite outstanding - shame we can't manage such things in the UK! Just three weeks until my next outing to Belgium (for the Mercia Charters railtour on 23rd April) but with trips to Czech Republic and Ireland in between it won't be such a long wait!

Sunday saw me head home on the same Eurostar set (!), a 321 to Milton Keynes and a bus from there to Northampton and finally foot to home. Progressively slower the nearer to home I got!!