Notes :
(1) Was booked via Westerton.
(2) 67007 on rear.
(3) Was booked to start at Dumbarton Central and go Dalmuir - Cowlairs North Jn - Cowlairs West Jn, but started at Springburn instead with to the ECS from Motherwell running 89 mins late. The change was caused by engineering work blocking the booked route.
(4) 67009 on rear.
(5) Was booked through to Dumbarton Central but terminated at Dalmuir due to the late running. Whilst the station at Dalmuir was very close to the hotel being used, road access was not as good as at Dumbarton Central.
(6) Booked reverse of outward route via Glasgow Central Low Level, but was diverted via Cowlairs as class 67's were not passed for passing through Glasgow Central Low Level.
(7) Booked motive power from Braidhurst Loop to Dumbarton was 2x37's but the 66 was substituted due to train length problems at Craigendoran Jn where it would have run ECS to run round.
(8) 67009 on rear. 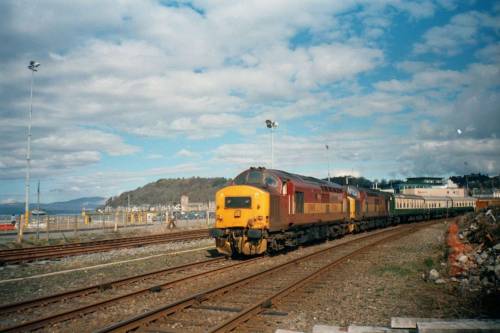 Train was late departing Kings Cross awaiting arrival of the driver who was delayed on an incoming train.

Train was late departing Aviemore awaiting arrival of the guard who had been sent to Perth by mistake. A substitute guard was sent down by taxi from Inverness.