Notes :
(1) with 37427 on rear.
(2) with 59202 on rear.
(3) Booked route was direct from Aston to Stechford. Diverted owing to "a major power failure in the area".
(4) Train supposed to go to Ardingly but didn't due to paperwork issues.
(5) Booked route was East Croydon - Norwood Junction - Crystal Palace - Tulse Hill. It was however reported that: ...before departing Haywards Heath the driver was informed by the signaller that “Coaching Stock without window bars is not permitted through Crystal Palace Tunnel”, hence the diversion taken.
(6) Timed to go direct Didcot East Jn to North Jn (Station Avoiding Line).
(7) Booked to use 2 x class 37's, but 37669 was found to have "Severe Wheel Flats" the day before the tour. 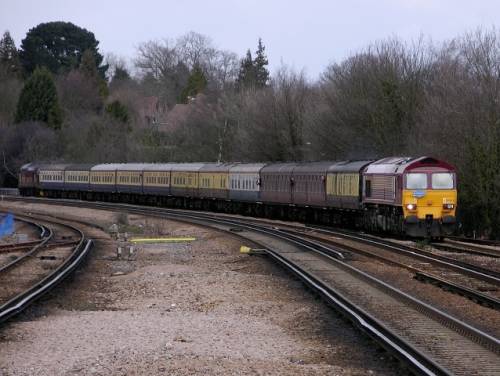 Sources : various including Alan Sheppard (on the train throughout)

This tour was originally scheduled to run last November, but had been postponed due to the dispute between the RMT and EWS. When the new date was announced, I decided to stick with it and use a precious day’s leave up as it was looking like there would not be too many more opportunities for class 37’s on railtours.

It was bright and sunny as we made our way to Banbury to join the train, we arrived in plenty of time only to be told that the tour was running half an hour late. 30 minutes turned out to be more like 20 and I was most surprised when 37427 came into view on it’s own at the head of a rake of 11 coaches. Once on board an announcement was made that 37669 had been failed with defective wheelsets so we would have to “make do” with just the one tractor, there being so few left in service now that there was no chance of another one. The one good thing about all this was that it increased the thrash factor, I’m sure that most people were grateful to whoever was responsible for allowing ‘427 to go out on it’s own.

An entertaining run was had over the Chilterns, apart from a wait at Bicester North for the preceding unit to clear the section, before we took the rarer of the two routes at Drayton Green and went to meet our class 59 in Southall Yard. This turned out to be 59202, one of the three 59/2’s that I needed and the only thing that I would score all day, the three branches all being dud.

Last time I went to Brentford the train had managed to get right to the end, thanks to a local supervisor who went out beforehand and secured the points. No chance this day and age surely, but I was very pleased to be proved wrong when the West Waste sidings appeared next to the window. From my position in the rear coach it was not obvious how far we had gone, but I don’t think the train could have got much further without encroaching onto the A4 road!

The next leg of the journey proved rather raucous despite the low speed on the branch as 37427 now had a dead 59 on the rear to contend with as well as the 11 coaches. There was plenty of time for a breather back in the loop at Southall Yard before a quick sprint down the main line to West Drayton and our next branch to Colnbrook. This I found most interesting as it gave a chance to see the new sidings and equipment that had been recently installed to deal with the construction materials for Heathrow Terminal 5, in fact there was a train in there complete with engine. Here again we treated to full line coverage, right to the gates of the Elf oil sidings – an excellent result.

Time now to let the class 59 do it’s stuff and whisk us towards Brighton, or perhaps trundle would be a better word as we appeared to follow every all stations service going. We arrived at Haywards Heath, the driver changed ends and we waited and waited….. Eventually we were told that we could get out and stretch our legs, something was obviously going rather pear shaped. Needless to say the inevitable happened and everybody was ushered back on board an hour later and the signal cleared for the main line, apparently no paperwork had been issued to authorise a passenger train to visit Ardingly. Personally I find this hard to believe with all the advance planning that is required to run such a train these days, that nobody on the Southern Zone was aware of the need to issue special instructions. Pathfinder have promised to write to everybody with an explanation when it is known – I look forward with interest to hearing the excuses, it must have been especially galling to anybody who needed the line particularly when we had already done the previous two lines to their full extents.

Nothing left to do now except sit back and enjoy the 37 return it’s load to Acton, with 120 odd tons of dead loco on the rear it was equivalent to 14 or 15 coaches, great fun! Further riots were evident when we passed Windmill Bridge Junction and somebody piped up “shouldn’t we have gone down there?”, instead we went down to Streatham Common before turning right. The excuse about Crystal Palace tunnel and coaching stock with window bars does not ring true I’m afraid, been there and done that before, as recently as last November.

We managed to get back to Acton Goods lines without further problems, where 59202 was dropped off and we even left early. It was a bit of a stop – start journey due to engineering possessions en route but we got back to Banbury at the stated time so no complaints on that score.

All in all, an excellent day out apart from the fiasco over Ardingly, hopefully this will not set a trend for the future.

Mileages are as shown in tour brochure and do not take into account the diversions from booked route. Thanks go to Rob Fraser for the adjusted mileages.