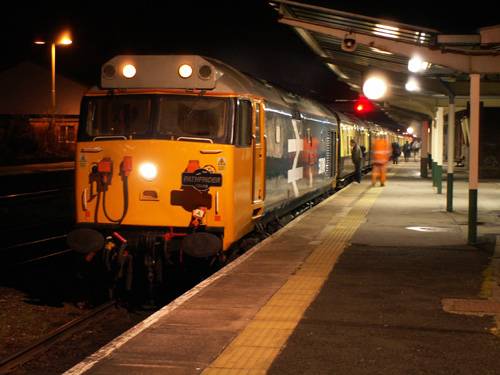 50049 at Chester waiting to start the tour (photo: John Lindsay)

The well loaded train set out from Chester on time at 05:20 under the care of a very well turned out 50049 Defiance.  Good progress was made along the Welsh borders in the dark, but as the sun neared the horizon, the light revealed the start of a glorious sunny, but very cold, early spring day.

Stops were made to pick up at several stations en route with a glimpse of 7802 Bradley Manor as it approached Shrewsbury from the East as we departed for the South.  Time was kept until the approach to Newport where time began to slip with a couple of checks.  However, good progress was made up the West shore of the Severn.  One couldn’t help but notice that the water level in the Severn, Usk and Wye was very high.  As we crossed the river on the run in to Gloucester station, there were crowds of people to be seen on the adjacent redundant railway bridge – surely not out to see a preserved diesel?  Indeed not – the Pathfinder announcer (who kept us well informed on the journey in both directions) let us know that we had just overtaken the Severn Bore as we had run into the city.  Turns out it was one of the highest bores of the year.

A resplendent King Edward I awaited us in Gloucester.  The train emptied of passengers as we all rushed to get the best photographic vantage points – much to the puzzlement of the “normal” customers.

As we were a little late into Gloucester, we had missed our allocated path south.  However, this did not lead to any significant problems.  6024 pulled out onto the main line with its load of 13 coaches and a class 50 (which was only supplying the much needed train heating).  She made a spirited run towards Bristol with her exhaust beat sounding wonderful through the open windows.  A signal check on the approach to Westerleigh Junction brought us to a stand on the sharp right hand curve with pronounced super-elevation.  The restart presented a challenge to the crew and engine with the heavy load and difficult geometry and she slipped badly at the first attempt.  However, a little tender care saw her away safely and on the run into Bristol.  It was never clear what we were held up for here, but it gave an opportunity to get some good sound recordings!

Arrival at Bristol was only a little late and the stop for water gave another opportunity for photography.  Haven’t they done a good job with improving the station! 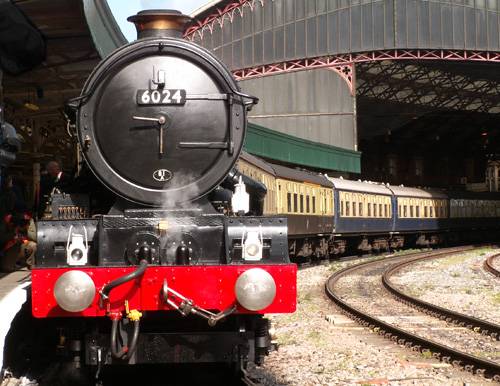 A late running Voyager was given the priority away on the line to the South West.  However, it was not long until we were away again.  We had an uninterrupted run through to Taunton through the superb Somerset landscape in beautiful sunshine.  We paused briefly at Taunton to pick up the West Somerset crew, then on to Norton Fitzwarren where we ran slowly onto the preserved line.

The climb to Crowcombe Heathfield proved hard work for our locomotive and she had to pause for a good ten minutes at the top to recover.  However, we were soon on our way again as the sea came into view.  Arrival at Minehead was late, but not by much.

There were two locomotives in steam at Minehead to welcome us there – 80136 and 5542; the standard tank on footplate experience work and the small prairie on a local charter.

Pathfinder Tours had thoughtfully warned the local chip shops that a large number of hungry visitors were arriving in Minehead, so we had no trouble finding refreshment, and a walk along the sea front was very invigorating!

The original intent was that we would be piloted to Bishops Lideard by one of the WSR locos, but in the end, KEI took all 13 coaches back there on her own.  While we had been resting, 50049 had run back to the eastern end of the line on her own.  We left on time from Minehead heading for home still in full sunshine.

Another chance for photographs and shopping at Bishops Lideard.  6024 was staying in Somerset for the steam gala the following weekend, so the rest of the way we were in the hands of the class 50.

The trip home proved to be fairly uneventful.  We were on time all the way into Wales through the Severn Tunnel and then crept ahead of schedule up the borders.  Most of the passengers were showing signs of fatigue as the light faded into darkness at about Abergavenny.

Arrival at Chester was about ten minutes ahead of the booked 21:55.  Those of us who had been on the move since the beginning headed wearily for the last leg of our journeys home with little thought for the poor support crew who still had to sort out our train!

A great day out – superb weather – well looked after and with excellent performance from well turned out locomotives and rolling stock.  Thanks Pathfinder!