Past Time Rail
The Exmoor Express

The departure from Paddington with 67017 “Arrow” and the all maroon 11-coach rake of ex BR Mark Is (OO91 set) was heavily delayed by the late arrival of the ECS from Old Oak Common.  This had allegedly been caused by the non appearance of the taxi conveying the driver to Wembley to pick 67017 (and also 67028 for the ECS).  Eventual departure was at 08:45, just ahead of the 08:45 First Great Western service train to Swansea.  67017 ran via the Down Main as far as Southall West where it was switched onto the Down Relief so as the FGW train could overtake.    Consequently, the 93 minute late start was compounded by running on the slower line to Slough.  Leaving there 105 minutes adrift the tour was switched back onto the Down Main at Slough West.  After picking up at Reading the train ran onto Didcot and ran through the station non-stop.  The train stopped on the Up & Down Relief line west of the station to change engines, and rarely these days, to change over from Air Brake to Vacuum Brake.  After 67017 had been detached the train manager had to manually release the Air Brakes on each coach individually.  Former GWR Castle Class 4-6-0 No. 5051 “EARL BATHURST” (and chocolate & cream support coach 35453) backed down through the station and attached to the London end of the train.  After creating the Vacuum Brake on the train, it pulled up into Didcot Parkway station to make the final pick up of the day.   A good effort by the operating staff saw the lost time reduced to 92 minutes.

The Castle made light work of its 12-coach load up the Relief line towards Reading, although it was easily out paced by an HST on the Up Main that left Didcot a few seconds later.  At Reading West Junction the route was set across the Main Lines and round the “avoider” to Oxford Road Jn and Reading West station.  At Southcote Jn the Castle took the right hand curve on to the “Berks & Hants” line to the West of England.   Spirited running now saw the lost time being slowly recovered.  At Newbury a water tanker was waiting, but the crew cut short the water stop to just 10 minutes and left there only 45 late.   Hopes were high that on time arrival in Minehead might just be achieved…

However, the first sign that something was amiss, was noted passing through Hungerford.  Speed had fallen to less than that expected and there was a faint suspicion that the brakes were beginning to drag.    A quick check on the brake gauge in the van confirmed the worst, only 20” of Vacuum, when it should have been nearer 25” for a GW loco.  The problem seemed to be getting worse and finally just approaching Crofton, the brakes came on and the train came to a stand a quarter of a mile short of the level crossing there.    Word soon came through from the loco that poor quality coal had caused the fire to become virtually blocked solid with clinker, which in turn had reduced the boiler pressure to less than 140 lbs.  As the pressure falls the Vacuum ejector ceases to work and the brakes come on automatically.  There now followed a frantic 20 minutes of effort from the support crew, during which time the Up line was blocked and an HST was held at the next signal to the west.  After trying to rebuild the fire and clearing a not insignificant pile of ash and cinders from the smokebox, the Castle was able to re-create the brake and proceed.

The remaining two miles to the summit at Savernake were completed with clouds of smoke and a thunderous bark much to the enjoyment of the lineside photters  as well as those on the train.  The train passed Woodborough some 80 minutes late and again hopes were high that the problems had been solved and some of the lost time could be made up.  It was not to be.  By Heywood Road the fire had deteriorated again and the boiler pressure was dropping alarmingly.   The Castle valiantly attacked the climb towards Clink Road Jn, and luckily the signal for the line towards Frome came off before the train lost its momentum.  Once over the summit the speed increased slightly, but unfortunately the brakes applied once more and brought the train to a stand some 200 yards from the platform at Frome.  After nine minutes at a dead stand  the crew managed to regain enough boiler pressure to fully release the brakes and get into the platform.

Once again the support crew swung into action, this time virtually rebuilding the fire from scratch.  Another road tanker was on hand to supply water.  It took the best part of an hour, during which time there had been snow, sleet and even some sunshine, before the train was ready to proceed.  The good people of Frome had turned out to watch, but those intending to catch the 13:28 were fairly displeased as this had to be diverted along the avoiding line and they had to wait until 16:18 for the next train!!  In the meantime the station staff had shut up shop and gone home. 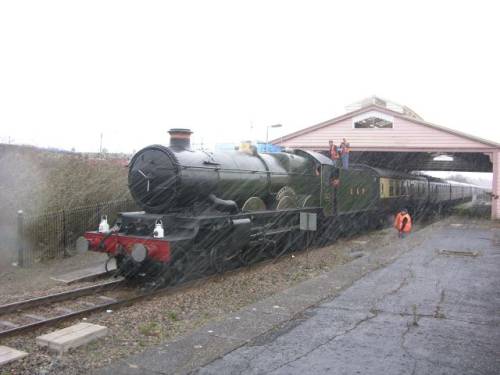 The Support Crew try and rebuild the fire on 5051 in a blizzard at Frome
(photo: Rob Fraser)

Departure from Frome was 135 late.  After a 20 mph check at Blatchbridge Jn the next thirty or so miles to Taunton were reeled off in fine style, with a couple of minutes being gained on a tight schedule.   After briefly stopping to pick up the WSR conductor Driver and Guard, the tour headed for Norton Fitzwarren and WSR metals.  The train was halted opposite the water tower just south of Bishops Lydeard station and the WSR attached their Mogul No. 9351 as pilot.  This is a fictitious number as the loco has been rebuilt by the WSR from ex GWR 2-6-2T No. 5193.    The pair of locos made light work of the steep climbs to Crowcombe and Washford en route to Minehead, again with much noise and smoke.   Although there was no other passenger service on the WSR an ex GWR 55xx tank was passed at Blue Anchor on a “Driver Experience” turn.   Arrival in a cold and windswept Minehead was at 16:37, some 87 minutes late.

The original booked departure time of 16:10 was revised to 17:45, and it was decided that it was unwise to allow the Castle to work the train back to Bishops Lydeard as originally booked (despite having the Mogul as a pilot).  Therefore, 67017, which was booked to come light engine from Didcot was sent through to Minehead to work the train throughout back to London.   This saved the 25 minute break at Bishops Lydeard where the loco change (and conversion back to Air Brake) was booked to take place.

Departure was further delayed by three minutes by D2133 shunting the stock from the “Driver Experience” train.  The run back over the WSR was non stop, save for brief halts at Leigh Wood AOCL which had failed and at the Stop Board at Norton Fitzwarren.  After setting down the WSR crew at Taunton, the 67 was opened up to full power and had a clear run to Westbury, where a 98 minute late start had been reduced to 65 minutes.  There was a brief crew change here, and the train went forward via Melksham and Swindon so as to be able to make the first set down at Didcot.   Despite a good sprint across the branch to Thingley, getting a clear run there at the expense of a down FGW Adelante, and some 90 mph+ running, a number of pw checks meant no further time was gained before Didcot.   A couple of minutes were lost in the station whilst another Adelante from Oxford went ahead up the Main towards London.   Further 90 mph+ running onwards to Reading and Slough pulled a couple of minutes back.  Here however, all trains were routed up the Relief line because of engineering work and consequently the train need no less than 34 of the 37 minutes booked for the final 18 miles, recording a 58 minute late arrival back into Paddington.