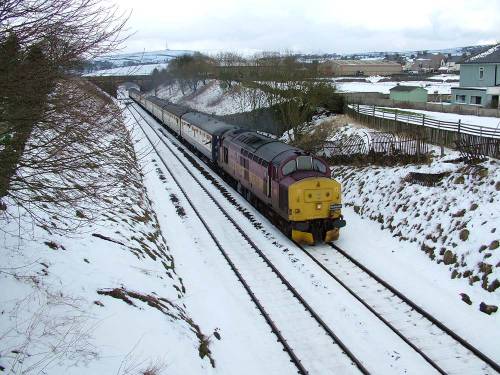 A snowy day out in the Buxton area for the tour participants (photo: 'Wilms')

The day started at stupid 'o' clock in Derby where the first voyager of the day to Birmingham was cancelled so onto the all stations slow bus to Crewe, (we changed into the fast bus at Stoke), we arrived in Crewe in plenty of time, so see 37427 leading the tour and 37669 on the rear. A good day was had with lots of rare curves and reasonably fast timings. Rose Hill Marple was short of photo opportunities, as unusually neither loco was in the platform! A slight hic-cup at Woodley when the driver forgot to stop for the photo stop, - realising once it was too late - we continued to Hyde Central for some reasonable photos.

During the afternoon we climbed through the snow to Buxton with a GREAT performance from 37427 approaching Middlewood. The snow was around 4 inches deep in Buxton (in undisturbed patches). An hour in Buxton provided 'lunch' from 16:00(!) which meant I learnt the difference between Chorley Cakes and Eccles Cakes!

Anyway, back onto the train an enjoyable journey round the snow covered Peak Forest line followed by the run back to Crewe via Altrincham. At Crewe 37669 was run round onto the front of the train despite some late running (after being held at Sydney Bridge), providing a great run home through the night... 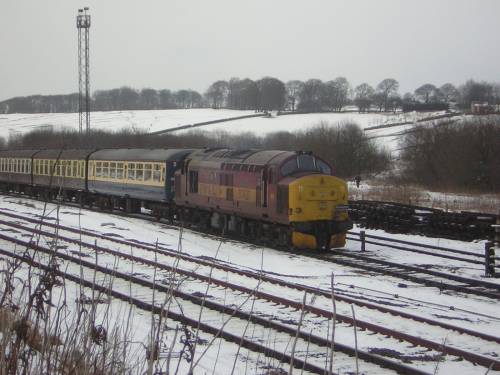 Another snowy shot, this one of 37427 at Buxton is from Nick Wason.