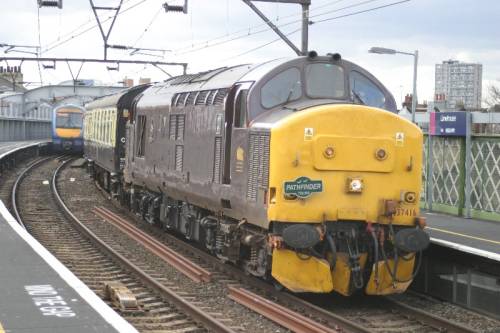 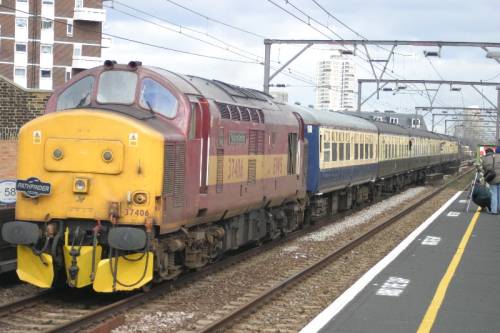 37406 brings up the rear through Limehouse (photo: Steve Trillwood)

We had been on the two previous Buffer Puffer tours so had no hesitation in booking this one as well. Another reason for not prevaricating was that the train was to be only formed of six coaches so was likely to book up quickly.

Following a change of date, we duly presented ourselves at Blackfriars, not without some difficulties caused by a signalling blackout on the West Coast Mainline. When we finally made it to the start point, we were greeted by the news that the stock had left Old Oak Common around an hour late. Despite this, departure was only a couple of minutes late thanks to cutting the Greenford Loop from the ECS move and the fact it was booked to arrive at Blackfriars some 30 minutes before the booked departure time.

It was not long before we hit the first bit of “rare” track between Loughborough Junction and Brixton – although there were several bits of freight only track in the itinerary, this was arguably the most sought after. The trundle round under Clapham Junction and wait at Latchmere Junction set the scene for most of the day, as the lines that we were covering have frequent suburban services which we would have to fit round. The climb up onto the North London did produce a fair bit of thrash from 37416, which was clearly audible from our position at the back of the train. A personal milestone was passed around Kensington for myself, 1,000 miles behind 416 – the tour that we did last June with it left me 9 miles short. Can we bring down 37417 for the next tour as I am 9 miles short on that as well!

For some reason, we managed to lose a few minutes going across to Barking where we stopped briefly to change guards. A C2C unit was noted in an adjacent platform going to Shoeburyness with which we made a parallel departure, surely it would go first but in the event we shot off in the lead with a triumphant bellow from the tractor. This was all very well until we got to Upminster where we had to wait for the unit that we should have crossed at Ockendon to come off the branch. A peek out of the window revealed the C2C unit patiently waiting behind for us to vacate the platform Oops…. Any further embarrassment was saved by us taking the scenic route via Grays and Tilbury, I wonder how late the unit was when it got to Shoeburyness?

Two weeks ago we visited Southend Victoria, today it was the route through Southend Central, so today we could view the coast from the comfort of the train rather than having to walk down!

There was an excellent photo opportunity at the end of the line giving everybody a chance to get pictures of both locos and for us to experiment with our new digital camera – we still took some pics on film just in case though. 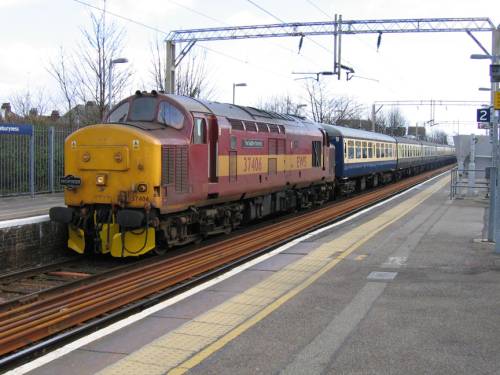 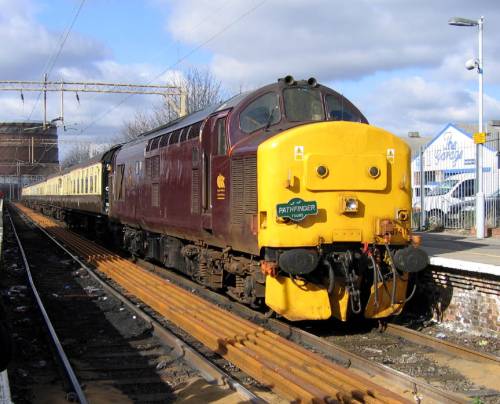 The run back to London proved a bit disappointing as 37406 did not sound as good as 416, the reason for this might have been the presence of a traction inspector who was assessing our driver but having said that 416 is a bit of a beast.

The traction inspector also caused some minor entertainment when his glasses fell from his nose as he alighted from the footplate at Fenchurch Street, falling neatly into the gap between engine and platform. One of the platform ladies rushed off to get a long handled litter picking device but the errant glasses were retrieved minus a lens. I hope that the missing lens was found after the train had left the platform.

Next port of call was Hertford East via some more “red bits” in Mr Baker’s atlas. It had been very cold all day with a biting wind, but I think everybody was surprised when it started snowing during our stop here. Fortunately it was only a few brief flurries, which had stopped by the time we boarded the train for our next port of call of Liverpool Street where we had an hours break. Most people went in search of food, but we contented ourselves with a cup of tea which we took back to the train to consume whilst we had a chat to one of our drivers who I know. If you are reading this Phil, here is the report and thanks for the entertainment, I think most of East London were made aware of our passage!

The flip side of having an hours break at this stage was that Chingford and Enfield Town were visited in the dark, personally I would have preferred to start a little earlier and forego the break in order to complete most of the route in daylight. There were ample opportunities for leg stretching at our reversing points, although I do suspect that the hour at Liverpool Street might have been for train crew PNB purposes in which case it would be unavoidable without utilizing another set.

Apart from this minor quibble the tour was thoroughly enjoyable and we reluctantly departed at Highbury & Islington. Much as we would have like to stay to the end, this would have meant a bus ride home as the last train north of Hemel Hempstead on a Saturday is 2204 from Euston, thanks to Silverlink and Network Rail destroying our local service at weekends. Hopefully there will still be some interesting traction available for “Buffer Puffer Volume 4”, these tours would not even be half as much fun with sheds or skips.