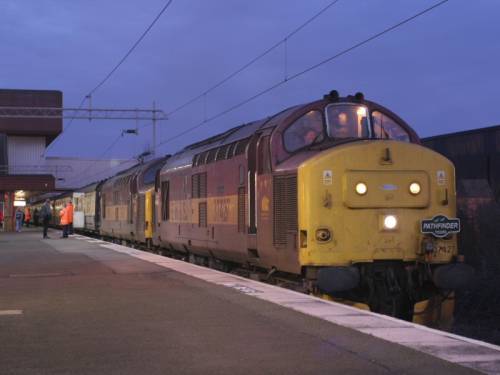 37427 + 37669 duly arrived (second Saturday on the trot for haulage) and I settled in the buffet car to enjoy the journey with a few freinds. Routed via Coventry, Leamington Spa and Didcot we had our first loco change at Reading (on the goods lines round the back of the station). That took considerably longer than anticipated as our replacement locos, GBRf 73204 + 73205, were still some way short of Reading when we arrived, then they got stuck the wrong side of the station whilst half of the days GWML traffic was passing through.

On our way about 30 late we took the SR route to London, no more slam-door units to be seen, just all new stuff. Once in the metropolis we passed by Acton Wells Jn then had a brief skirmish with the Midland Mainline before dropping on to the North London Line and circling our way to Liverpool Street - and my first ever visit there with 73's! The "normal" passengers seemed a little bemused as to what we were all doing photographing our train. "It's a special train."..... "oh, right." (normal wanders off, none the wiser). 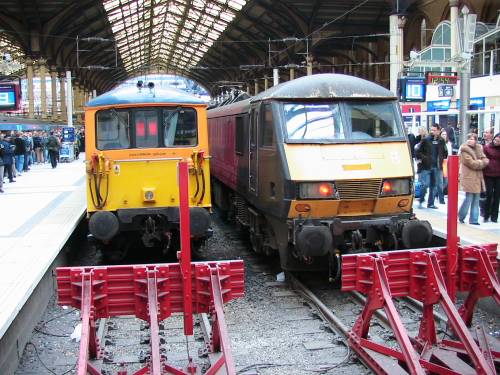 60094 was soon bolted on to the back of the train and we departed pretty-well on time for Southend Victoria. 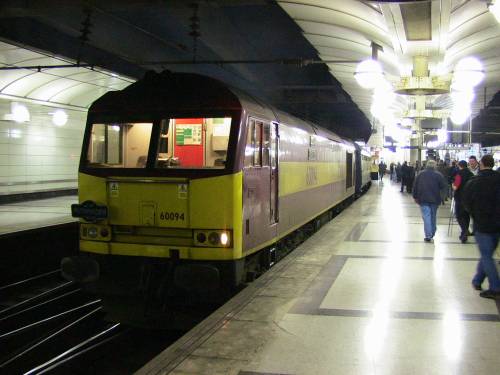 60094 in the murk of Liverpool Street (photo: Gary Thornton)

Arrival into Southend Victoria was 15 minutes early. I spent the break talking to a few people I know about various subjects. Thanks, by the way, to all those recently who have voiced/written in with their appreciation and continuing support of my Website - particularly as one enthusiast society which recently printed in their newsletter a very critical statement by one of their members questioning the accuracy and appropriateness of the historical content contained within. Seems to me the comments made by the person concerned are not generally supported by the majority of people with whom I've had contact, a number of whom are members of said enthusiast society. I would simply point any doubters to the review in the February 2005 issue of Railways Illustrated which lists and reviews Six Bells Junction in their "Best Website Hits of 2004" article which includes the statements "very good", "outstanding" and "excellent" within their review. Make up your own mind. Anyway, back to the tour...so, where were we...

Oh yes, the 86 was our next performer. Wandered up to the end of the platform to see if it had arrived but the train was still loco-less...but comments from a couple of people I passed suggested it was indeed going to be 86501. Arriving at the platform end and it was confirmed, someone even deciding to put 86501 through the washer plant before letting it drop on to the train. 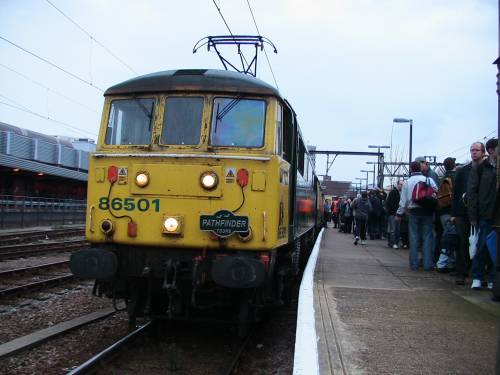 A celebratory beer was consumed (not that I really needed an excuse for another one!) as we headed back from where we'd come, as far as Stratford at any rate, before another stagger round the North London Line to Wembley and our last loco change, back to the pair of 37's. Parked up next to us in the yard was brand-new Hull Trains 222101, a definite new sighting for all on board I don't doubt.

After sitting a while....we set off northwards instead of south as booked. OK, still 86501 then. Stopping a little further down the yard we then did the loco change after which we departed south as booked, back through Acton Wells Jn then we sat for 15 minutes at Acton East Jn whilst the various train operators over this stretch of the GWML paraded their entire fleets of trains past us (several times...at least that's how it felt!). At this time on a tour, it's now dark, we are happy to head home so any delay seems too long. We were only on the GWML long enough to set-down passengers at Ealing Broadway then we turned right, then left on to the Chiltern line. By this time I'd decided it was high time to leave the buffet car and visit some people I knew in coach A - which happened to be at the front - typical, I come up for a chat but couldn't as the tractor thrash was so loud! Regaining our outward route at Aynho Jn we got back to Birmingham International a couple of minutes behind schedule, though departure from the station was delayed for some as one of the car-park ticket machine was happily swallowing peoples £5's and not returning their tickets to allow them to escape the car park!

Excellent tour, particularly good for me as I scooped my 97th 86 out of the fleet, but even without that it was an enjoyable day out.