Notes :
(1) Train stabled in the station whilst passengers detrained for a charter train on the Tiefa Coal Railway. See bottom of tour Page.
(2) There was an option to remain in Chabuga to catch the Westbound Ji-Tong passenger train, departing Chabuga at 16:34, headed by QJ 6911 transferring back to the COE at Lindong.
(3) There was an option to catch the Westbound Ji-Tong line passenger train (dep. 20:40) from Daban headed by QJ 6751 to Jingpeng (arr.00:21) returning on the Eastbound train (dep. 02:24) headed by QJ 7137 as far as Daban, and then onto Lindong (arr. 07:57) with QJ 6911. Those of us who got off the train at Jingpeng rather than risk travelling further west got caught out by loitering on the platform to watch the loco being watered and then the train departing. All the station lights went out and the station exit had been locked. Oops. Exit was eventually made by stumbling blindly through the Goods Yard till a break in the wall was found. My abiding memory of this trip will be seeing the arrival of the eastbound through the window of the main hall of the station, the passengers queuing up to be admitted onto the platform and the ensuing free for all mad dash when the gate was finally open. Thank goodness sleeper berths were available.
(4) DF4C 5012 on rear.
(5) DF4B 1656 on rear. 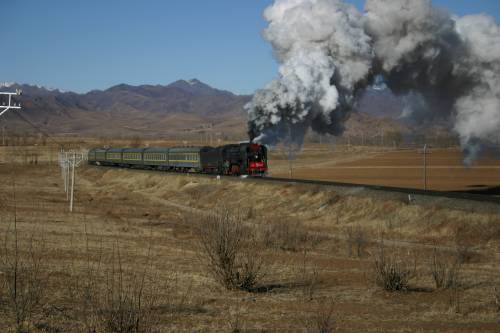 Day 1 on the Jitong and 6828 storms the east side of the Jingpeng pass west of Yuzhoudi.

A super Spin and Win of more than 2328 kms of steam haulage (plus 207 kms on the Tiefa Coal Railway).

The train should have been hauled by thirteen different QJ steam locos during the stay on the Ji-Tong line. Unfortunately, through no fault of the Organiser who had paid extra, this didn't materialise. However by taking advantage of the train timings three additional locos were added to the total by travelling on the service trains -the last steam hauled sleeper trains in the world. This also added 266 kms of extra mileage.

Tour participants were also offered the chance to ride on the footplate of the QJs hauling the Orient Express. Though having previously enjoyed this privilege twice before on double headed freight trains I couldn't resist and eastbound up the Jingpeng Pass once again to the summit station of Shangdian was enjoyed in the cab of QJ 6986. This time I remembered to stop breathing when the train passed through the tunnels. The time before I didn't and nearly stopped for good.

Depot visits were arranged at Daban, Chabuga and Baiqi of which the most atmospheric was that at Baiqi (the present western limit of steam working on the Ji-Tong). With a day time temperature not much above minus 20c in places the smoke effects from the steam engines and locos working hard was a pretty awesome sight for someone not old enough to have experienced the demise of steam on BR. As well as daytime visits to Daban a night photography session was arranged on the 13/01. This proved somewhat problematic as three coach-loads of tourists turned up at the gates only to be barred access to the Depot. A standoff followed for some considerable time before the Depot Manager turned up by car to lower the drawbridge (Ok open the gate then ).

TV Film crews from China, UK and Germany were present to record the events as they unfolded. I hope they didn't film me falling over on a block of ice whilst walking around Baiqi shed with cameras flying off in all directions when I kissed the ground. I'm told the ITV film will be shown on TV sometime in the summer. I'm sure the Magazine that sponsored this jaunt will provide the details nearer the time. I hope they weren't too upset by my camera being held out of the QJ cab as 6986 climbed the Jingpeng. Still it should be fun to enjoy the rerun of the Siege of Daban.

All in all a great success though the freight traffic on the Ji-Tong wasn't as cooperative for photography as might have been. On 12/01 an engineering possession on the Ji-Tong meant very little was running over the line in daylight. Thus myself and a few others resorted to hiring a QJ to perform run pasts on the Y at Chabuga shed to keep us amused.

I could have done without witnessing the open air abattoir in a village passed through in the photobus. Good job there was no bacon for breakfast and I discovered that you couldn't hear the steam loco even in the front coach of the Ji-Tong passenger train which I got thrown out of as it is reserved for off duty railway staff (ex BR employees don't count apparently). Interestingly you can hear the thrash from the top bunk of the hard sleeper that is third coach from the engine. Ordering dinner on the passenger train was not without amusement costing some three times the price of the ticket to travel. Not surprisingly most travellers bring their own picnics (pot noodles using water from the boilers in each of the coaches being favourite). For our dinner a splendid beef and vegetable stir fry was ordered by luck rather than judgement with the menu written in Chinese. Pot noodles also appeared as eventually did the beer. The latter took some time to order as the waitress didn't understand the word. Imagine the laughter when the bottles eventually appeared with B E E R in large letters on the label.

The COE coaches are unusual (but not for China it seems) in that heating is provided by a coal fired boiler in each coach. The other useful attribute was that a section of window could be opened just enough to push a camera through and listen to the thrash. However with the low temperatures this wasn't taken advantage of too often. The booze and company in the bar car was more inviting most of the time-a more widely travelled companion keeping a group of us entertained with stories of gricing tracks of varying dubiety in Taiwan and Indonesia as the beer flowed.

Because of the limited facilities for washing afforded passengers on the train shower stops were arranged in towns along the route of the train. Unfortunately the towns along the Ji-Tong are some way away from the towns they purport to serve and so the showers ended up being rather hurried affairs not helped by the standards of plumbing. At one hotel the shower disintegrated into its component parts when water pressure was applied, the walls and ceiling got more wet than I did.

A Firework display took place at Baiqi on the last day before the tour headed back to Beijing by way of Datong and the old route through Badaling and the steep descent to Nankou reached by way of reversing sidings under the Great Wall. This must have been awesome to witness in steam days from atop the Wall itself. These days the trains are either routed via the new electrified line to the west or top and tailed by diesels as was the COE itself.

After dinner in the hotel in Beijing it was decided by five intrepid souls to finish the evening sightseeing in Tiananman Square. Only trouble was we got out at the wrong station on the Metro and ended up five in a taxi built for three - one in the front seat, three in the back with one stretched across the three in the back. and once we got to Tiananmen Square we found it closed and guarded by Police or Soldiers. A bit like Trafalgar Square on New Years Eve I suppose.

Before flying back to Heathrow it was off to the Beijing Railway Museum next to the China National Rail Test Track. Sadly no rides and the heating in the museum was non existent. Coldest I'd been all week. 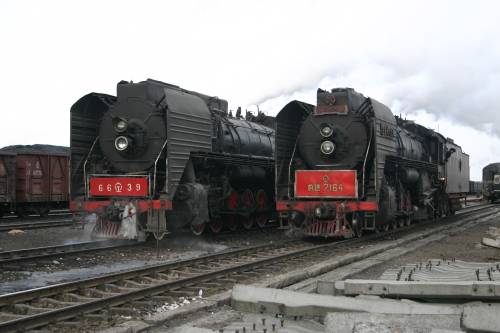 Last day on the Jitong and an engine change at Daban. 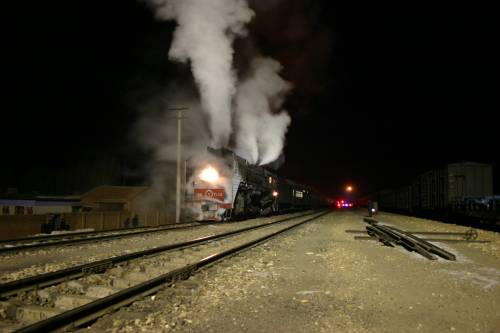 Farewell to Jitong steam at Baiqi Station as 7114 prepares to run light to the Depot.

One last obstacle to avoid was the person at the Airport trying to dupe me into paying a non existent airport tax and then it was grit your teeth for the flight back to Heathrow in seating built for people less than 5ft tall - there must be some human rights violation in not providing adequate seating space in economy class.

Still at least the plane wasn't delayed for a couple of hours like the outward journey. Now I'm broke and won't be going anywhere till the Bank Manager gives the right away. Sadly, I suspect a trip like this will no longer be possible when the red ink disappears from my bank statements.

Timings (Booked Only)
(from Andy Pullar)

Notes :
(6) Tour of Tiefa Coal Railway passenger lines (Liaoning Province 70 Km North of Shenyang) using charter rake of 3 modified Series 22 coaches - one coach fitted with a generator (8934) and one coach equipped with a mini buffet/bar (21734). The other coach, (21172), was adorned with paper lanterns and banners proclaiming such things as "Locomotive Retires Gloriously But Alive in Travelling" and advertising the proposed heritage operation.
(7) The KD6 is a USATC S160 and has been specially brought to the Tiefa Railway from the Pingzhuang Mining Railway and restored to working order for hiring to Tourist Groups.
(8) The break at Diaobingshan in the morning was arranged so that the morning steam hauled passenger services could be photographed arriving and departing. As part of an attempt to encourage tourism to the area, local dignitaries took part in a ceremony outside the station after which, a trip on two of the service trains was arranged. The trains were held in the station until after the ceremony had finished.
(9) Photo stop between Faku and Diaobingshan took place on the embankment before the hill (on which the monument to celebrate the date ten million tonnes of coal was mined in a single year was placed) overlooking the Pao Yan Reservoir (so the guide called it). The charter of 26/10/04 also had a photo stop and run past at this location. 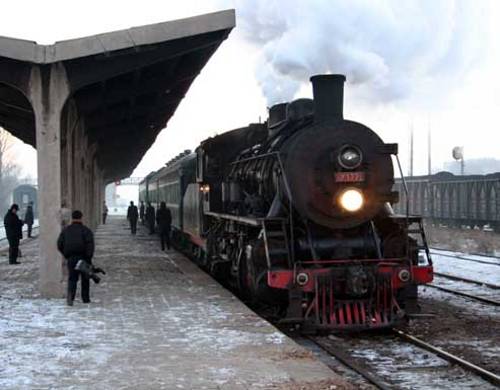 SY 2-8-2 1772 waiting to get the show on the road at Daqing Tiefa Coal Railway Station. The China Orient Express is stabled at the China Rail Station to the left. 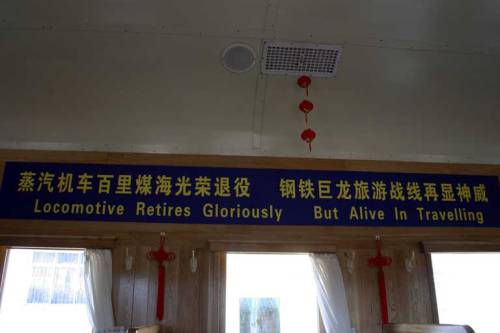 Chinese Banner inside the charter stock marking the final years of steam power on China's Railways. 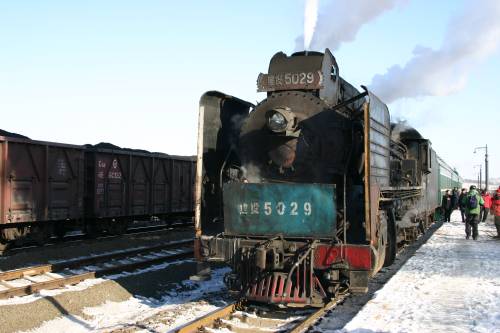 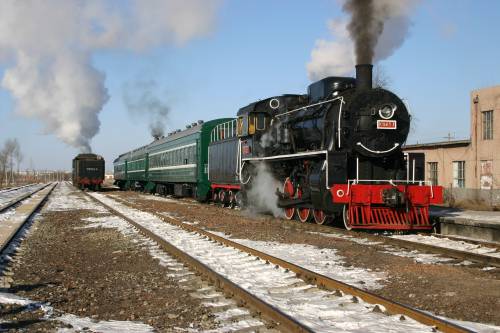 Newly restored to working order Kd6 no 487 (USATC S160) waits to return towards Tiefa at Dongguarton.

Timings (Booked Only)
(from Andy Pullar)