Notes :
(1) Flooding almost prevented the train getting to Aberystwyth as planned.

On the 23rd October, Past Time Rail at last managed to get a Manor to Aberystwyth, at the head of the Cambrian Coast Express. The train started diesel hauled from Bristol TM behind EWS class 37 no 37203 in Mainline blue. 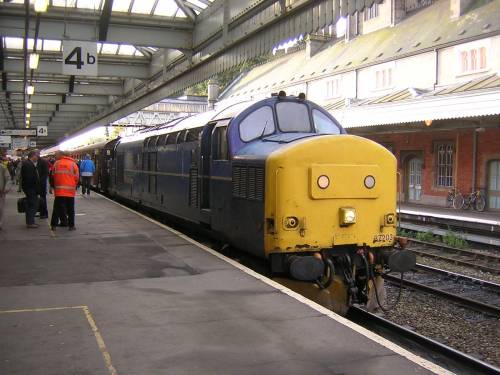 Arrival at Shrewsbury was on time and after a short wait whilst the locomotives were changed over, 7802 Bradley Manor pulled into platform 7 at Shrewsbury ready for the trip over the Cambrian line to Aberystwyth.

The rain had finally stopped as we left Shrewsbury but the rails were still wet from an earlier downpour and the Manor struggled with it's 8 coach load up the rising grade to the former Westbury station, losing 25 minutes on the schedule to Welshpool. A slick water stop at Newtown enabled a little time to be made up before the Manor tackled the Westbound ascent of Talerddig.

The speed on this climb didn't drop below 30mph and there were some wonderful noise and smoke effects from the Manor. From Talerddig it was a gentle downhill run to Machynlleth, where we ran through the station wrong line - perhaps the other platform hadn't been gauged!

From Machynlleth to Aberystwyth, the line is almost flat, punctuated by two short stretches of 1 in 75, either side of Bow Street. Again the Manor struggled to hold it's feet on these climbs and many people started to wonder if it would make it up Talerddig on the return. 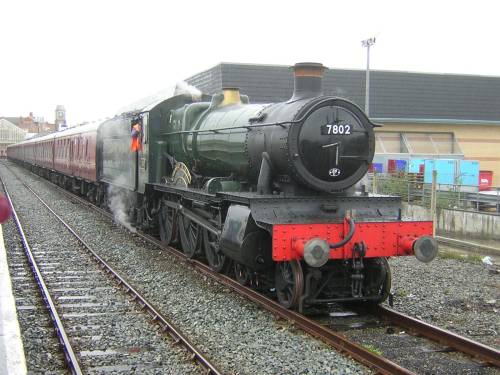 7802 during the layover at Aberystwyth (photo: James Dowling)

After a wet 3 hours in Aberystwyth, the return Cambrian Coast Express left on time at 4 o'clock. The run to Machynlleth was fairly uneventful and a ten minute wait in the station for a delayed 158 from Birmingham saw the Manor blowing off furiously, eager to test itself on the 15 mile ascent to Talerddig. We reached 45 mph before Commins Coch where the gradient started to really kick in. On greasy rails, the Manor held its feet superbly. As speed slowly dropped as we hit the 1 in 52, the noise from the engine grew ever louder, the exhaust beat reverberating through the valley. With its heavy train, any slip would have been disastrous, but the Manor was always in control. Slowly plugging away with not a hint of slip. The cutting at the top of the bank was reached at 11 mph, not the fastest time, but a magnificent effort given the conditions.

As we sailed through Talerddig loop and started gathering speed on the descent to Caersws, you almost felt that "Bradley " knew it had made a good job of the run up Talerddig. The train reached 55mph between Newtown and Welshpool before the again struggling up to Westbury station.

At Shrewsbury, everybody had to detrain and the crew of Bradley Manor received a well earned round of applause from the gathered crowd on Shrewsbury station. After an hours wait, 37203 reappeared for the run back to Bristol TM and although nowhere near as exciting as the run up Talerddig, a maximum of 84 on the run through Leominster was attained.

All in all a fantastic day out and well worth the wait.