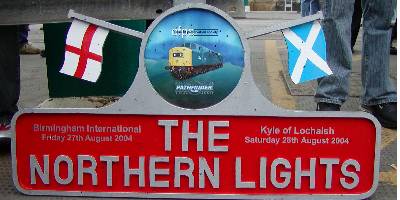 In service days there were very few occasions when a class 40 reached Kyle of Lochalsh so it was not difficult to predict that this tour, taking 40145 to Kyle, would be popular. As with many tours these days the route changed several times and it ended up as a straight thrash out and back from Birmingham to Kyle (which was a bit of a shame as we lost the Forth & Tay Bridges and a run via Aberdeen). A Fifty Fund class 50 doing the honours between Birmingham and Preston both ways would make this an "all preserved" railtour.

A check on the 'Net on the Thursday night confirmed I could get to Birmingham International by public transport, the first bus at 06.15 from my local stop to the railway station for the 06.40 Central Trains service to Lincoln. Being used to a staple diet of 321's out of Northampton having 158858 to Birmingham International was quite a strange experience! A colleague who joined us at Rugby confirmed that 50031 had passed through a few minutes ahead of us with the tour stock. 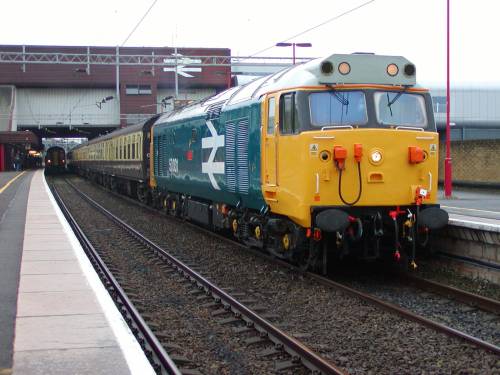 50031 prior to departure at Birmingham International.

My booked seats were in the rear coach so it was a quiet journey north, 50031 doing a good job on the mix of 10 mark 1's and mark 2's. Arrival into Preston was early (usual lax timings to blame) and 40145 was in ready for us. Not the best lighting to get photos of each loco on the train as it was right into the sun, but we did our best anyway. 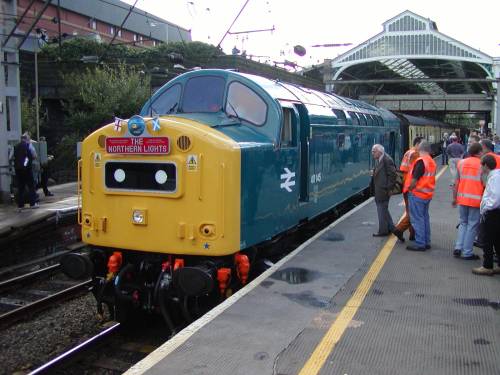 A look through the timing sheet confirmed that we could expect to visit quite a number of loops en-route north. It looked like the NR signallers wanted to get in the spirit as we were looped at both of the first two we arrived at! It also was noticeable that 40145 wasn't too sprightly and acceleration was fairly sluggish which was a bit of a surprise on only 10 coaches. A short while later and I found out the reason for 145's apparent poor performance - one of the recently overhauled turbochargers had cracked a casing. Despite the best efforts of the on-board CFPS fitters the decision was reluctantly made that 145 should be pulled from the train. 90 miles from Preston and we arrived into Carlisle in the knowledge our 900 miles of 40 haulage was over for this tour after just a tenth of the distance. 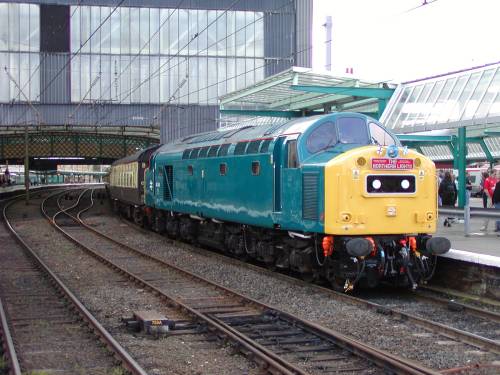 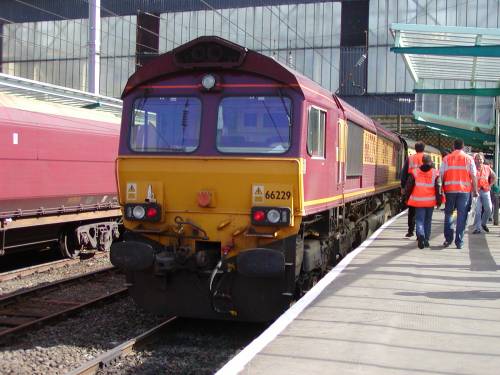 ...less said the better I think...even the headboard wouldn't fit!

While 40145 headed back light engine for repairs, 66229 backed on to the train and we set off northwards, quite a subdued atmosphere on board as I am sure you can imagine! 66229 was to take us as far as Motherwell (Braidhurst loop). A stop at Quintinshill allowed 90015 to pass on a Euston to Glasgow service, the penultimate day of Virgin class 90's working and possibly last working of a Virgin class 90 to Glasgow? 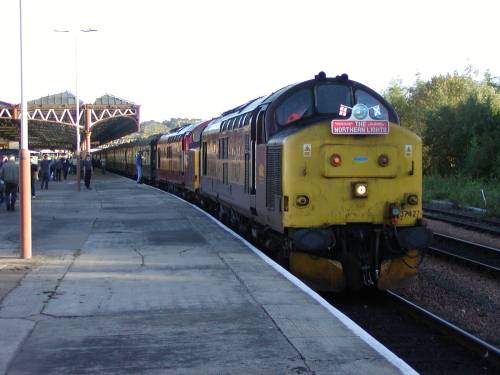 The tractors, at Perth.

A two hour break at Inverness gave a further chance for liquid refreshments before we settled in for the overnight run to Kyle (leaving Inverness at 00.17, returning 08.11). I opted for the cubbyhole under the shelf at the blocked-off middle doors in our coach. A bit of a squeeze but I did manage a reasonable amount of kip. A few photos were taken at Kyle before the tractors propelled the stock back a bit in order to run round. From here on in we would be in the leading coach so things got a bit more entertaining. 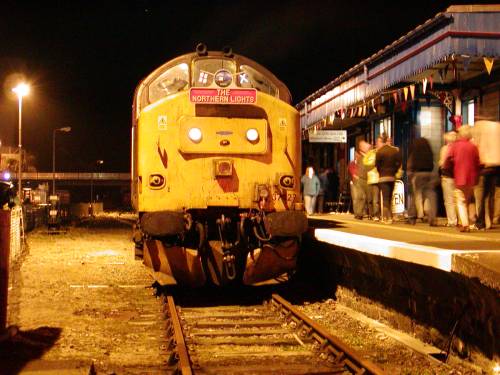 The tractors at Kyle of Lochalsh...I know, it really should have been 40145!

It was a wet journey back to Inverness, much of which I don't however remember. After reversing at Millburn Jn the train propelled back into Inverness station where we had a "breakfast break" of nearly three hours. Inverness seemed ill-prepared for 400-odd cranks all after a cooked breakfast! Two of us ended up in the Lemon Tree Café which was soon full (with other railtourers) and turning punters away. The cook was overheard asking where everyone had come from. The nearby Safeway restaurant was also reported to be full and overflowing. 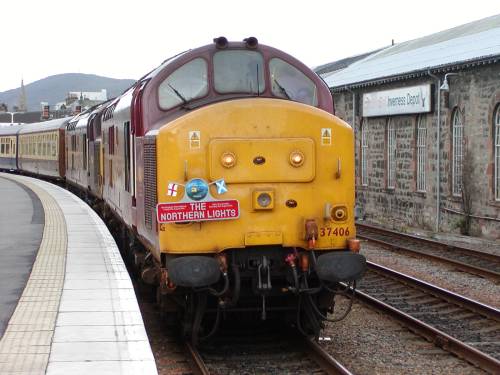 Waiting to leave Inverness for home.

The run southwards was absolutely superb - 37406/427 being worked very hard at every opportunity. Being sat in the front half of the front coach added somewhat to the enjoyment factor. News soon filtered through that 50031 was heading north to intercept us at Carlisle and we arrived to find "Hood" waiting for us. As with the southbound run we had just experienced from the tractors, 50031 did not disappoint and I have to say it was probably the best run I have ever had off a single class 50 on the mainline. With lax timings and a good run south it was somewhat frustrating to still be looped at Carnforth. 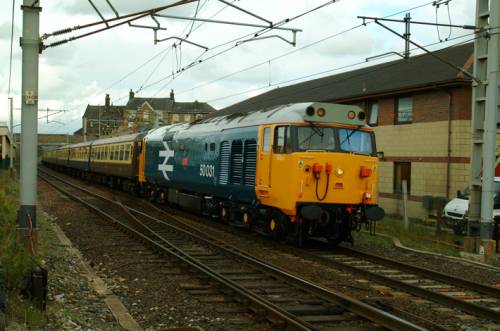 Even more annoying to then be let out after 14 minutes as NOTHING had passed us during our wait! Rounding the corner however a series of single yellows suggested we were now behind a train out of Morecambe. At Preston we had half an hour booked for the loco change but not now needing it we hoped for a speedy getaway. Wrong! A seemingly endless stream of red/silver plastic passed us before we eventually got the road.

All too soon we were in the black hole that is Birmingham New Street (couldn't make International due to engineering works) and the end of the two day tour. A lift home from a friend was all that was left to finish off the two days.

Verdict: Gutted (obviously!) that 40145 had to be taken off the train at Carlisle - at the end of the day however it was the responsible thing to do to prevent damage to the loco, a failure on the mainline and reputations and it was therefore the right decision. Some people gave up the tour at this point but I have to say I think actually they lost out on a very good tour as a result. The sound of 37406/427 thrashing up to the summit at Slochd will remain vivid in my memory for a long time to come, as will the return leg with 50031. 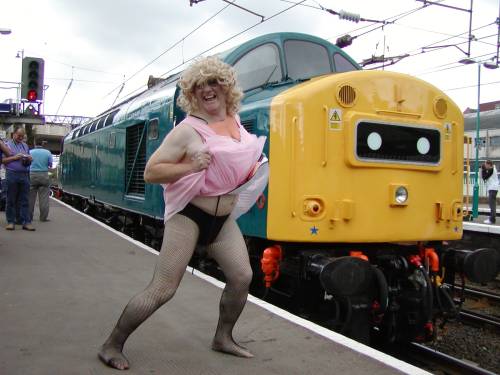 John Stephens a.k.a. "Kyle" Minogue had to produce somewhat earlier than
anticipated and is seen here "waving" 40145 goodbye at Carlisle.