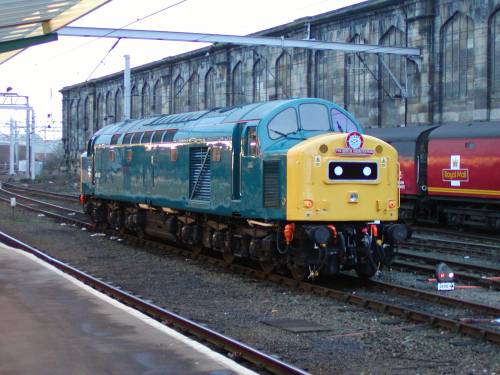 A gleaming 40145 running round the train at Carlisle.

Source & photo : Gary Thornton (on the train throughout)

A week on from my very wet day  out on last weeks Hertfordshire Rail Tours outing to Dereham and Norwich I was hoping for a much drier day out this time round! A year on from D345's successful return to mainline running it was nice to finish off the year with another run behind this superb locomotive. The plan was simple, 40145 on its own all day, Crewe to Edinburgh and back, a total of 570 miles. The advertised route was out WCML as far as Carlisle, turn right, Newcastle, ECML to Edinburgh then home via the Carstairs avoider and finally WCML back to Crewe. In the event it was decided that if was too risky sending a 40 round the Upperby curve at Carlisle so the train would reverse at Carlisle Station instead, thereby at least giving both ends of the train time at the noisy end.

An 02. 30 alarm call was order of the day to get myself and a colleague to Crewe for the 05.38 departure time but at least the M1 and M6 were reasonably quiet so we were parked up and on the station with time enough to grab a Coffee - or at least we would have got one except that the station buffet didn't Open until 6am, 22 minutes after we were booked to depart!

40145 soon rolled in with 12 coaches in tow and I was well pleased to see Coach A (in which I was booked) was at the front. This would mean we were only at the back from Carlisle to Edinburgh as the stock would be reversed at Edinburgh during the 3 hour  layover. The big blue machine made light work of the train as we headed northwards, stopping at Warrington, Wigan and Preston to pick up more passengers. Although still dark, the ascent of Shap was something to be remembered for a very long time. In damp drizzly conditions we reached the summit at 32mph,  then quickly hit 90mph as we sped downhill to Carlisle. Arrival was half an hour early providing an hour to do the run- round. This presented maybe the only really good chance in the day to get photographs, though at 1/4 to 1/6 sec exposures it was not exactly what could be described as "day photography"!

Now at the rear of the formation it was a quiet journey onwards to Newcastle and Edinburgh. Having been looped at Crag Mill to allow two trains to pass only a Virgin "shop" sped past then we were on our way again, however we were again looped at Grantshouse (unusually in the UP passenger loop) to allow another train past. Oh, somewhere near Berwick it started to rain and, guess what, it never stopped until Carlisle on our way home....

What to do in three hours in a wet Edinburgh? After covering a class 91 departure to Glasgow (I still need one for haulage!) a quick trip to Newcraighall, the recently opened station in the Edinburgh suburbs, took about an hour and covered required track for me - that from Portobello Junction to Niddrie South Junction. Waiting for the unit to return at Newgraighall (it shunts out of the platform then back in again) we observed the tour ECS a few hundred metres down the line still en-route to Millerhill (for servicing) after its trip round the Edinburgh Suburban line. Back At Waverley I killed the last hour watching trains - covering another class 91 departure as well as an Aberdeen bound HST (I need one GNER power car for haulage so might have been in luck...alas not). 170426 was the only thing I scored for sight during the cold wet observation period.

In typical railtour style departure time came and went with no sign of our train - but word soon came through it was still at Millerhill waiting to get the 40 on the right end of the train. Eventually it arrived but a further delay meant we didn't actually get away until 17.13, 61 minutes late. A stagger through the first tunnel towards Haymarket was a disappointment but the thrash through the second one more than compensated. Beattock was no obstacle to 40145 and our late running meant the booked pathing stops at Abington and Kingmoor were abandoned thus it brought us into Carlisle just 15 minutes late. 40145's performance away from Carlisle was definitely another of the highlights in this enjoyable day out as were the other station departures en-route to Crewe (Preston for example - now there's another to remember for a long time!). Arrival back into Crewe was just before 10pm but I don't think anyone was too bothered about the slight late running after what had been a simply superb day out.

As usual, my thanks go out to all the individuals and organisations involved in the running of this magnificent tour - your efforts are truly appreciated...may there be many more similar outings in the future!!

P.S. : To the individual who, sometime between arriving at Edinburgh and departing again, decided to help himself to the CFPS 2004 calendar I'd bought and left under my bag on the overhead luggage rack - what did you really gain from taking it, other than depriving the CFPS of another £8 to help keep their locos running for all of us to enjoy?

Timings continue in first table. A time in brackets is approximate.