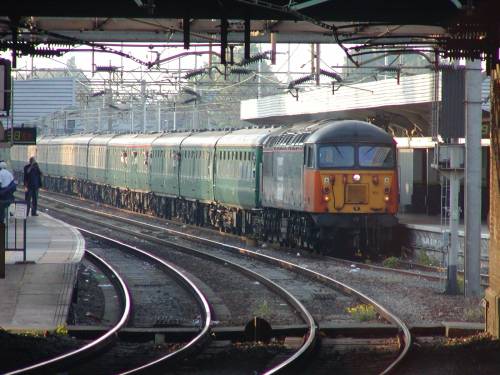 56102 pulls into Northampton on the way back to London.

On arrival at Euston at 0830 the announcer stated that the Charter train for Crewe was now ready for boarding at Platform 16. I went down the slope to the platform and saw 67001 at the buffers.A walk up the platform found our engine was to be 92031. Whilst waiting I noticed that there was little movement apart from Silverlink.1 Virgin train came in but nothing left. After getting on the train we were told that the overhead line on the up slow had been brought down near Ledburn Junction and the West Coast line was closed. Unfortunately the fast lines were also closed due to engineering works. As we waited, there was a continuous stream of Tannoy messages from the station announcer, which in true railway fashion were mostly unintelligible. I think they were advising people to go to St Pancras or use a Silverlink train as far as Tring? where coaches would take them to Milton Keynes. At 0930 the overnight sleeper arrived behind a Class 90.

To help pass the time us first class passengers were served breakfast (how many people have had a full English breakfast served in a coach at Euston?). As the time approached 1000 we were told that the engineering works had been cancelled and the fast lines would soon be open then we could leave. So at 1011, we departed (first train out), and made our way up Camden bank. We passed Willesden shed with D9016 inside and 66714/715 outside. There were a few Class 66's in the yards as well as 31128 and 31190 top/tailing a Serco train. We reached Watford J for the first pick up leaving 71 minutes late. Soon after Tring we started to slow down and were passed by a south bound Virgin train hauled by a EWS liveried Class 47. Then we passed 47828 L/E on the down slow. We stopped short of the broken down train. After 4 minutes we moved off and passed the Virgin train with 87009 on the back with its pantograph tangled in the wire. We then accelerated (passing Thunderbird 57302 approaching the 87 on the up slow) and continued to our next pick up points at Milton Keynes and Northampton, leaving the latter 75 down.

I won't say much about the Open Day itself, apart from the fact that a number of promised modern traction were missing including DRS Class 20 and 33, Fragonset Class33 and 73 and anything from Freightliner.

Around 1720 our train arrived at Platform 12 behind Loadhaul liveried 56102. Soon after departure at 1733 we passed the returning Freightliner charter again. At the LNWR  shed Ian Riley's 37197 was outside and 47853 was sticking out of the shed. All went well at first and at Stafford we took the Wolverhampton line, turned left at Bushbury J and Darlaston J before passing through Walsall to take the Sutton Park line eventually reaching Water Orton and then stopping at Nuneaton (where 57304 was in bay) for a crew change. Departure was 14 mins late but easy timings put us 1 minute early at Long Buckby. As we approached Northampton with John Farrow announcing that we were back on schedule things started to go wrong. We braked and stopped short of the station as we had been signalled onto the through line. After resetting the route, arrival was 6 mins late. We then went on to Milton Keynes with a departure 9 down. Soon after leaving we started stopping at most signals. We were told that there was severe signalling problems between Berkhamsted and Hemel Hempstead, the 4 miles between them was being treated as 1 section and we were in a queue of trains. At Bletchley we were down 19 then took 55 mins for the 15 miles to Tring and another 53 mins were to pass before we cleared the problems at Hemel (just over 6 miles). The final 24 miles (including a 4 minute stop at Watford J. took 33 minutes with the arrival at Euston at 2306 - 101 minutes down.