Pathfinder Tours
The Edinburgh Explorer
& The Forth Porter

Notes:
(1) Train stopped at Bromsgrove for 60052 to buffer up on the rear and bank the train up "The Lickey". The 60 dropped away a few chains short of the summit at Blackwell
(2) plus 47736 "dead-in-tow" but providing train heat.
(3) plus 66117 on rear.
(4) Train was booked to traverse the other side of the Leith docks sidings complex but didn't owing, it was said, to EWS having not completed the paperwork to allow it to happen.
(5) 66040 on rear. 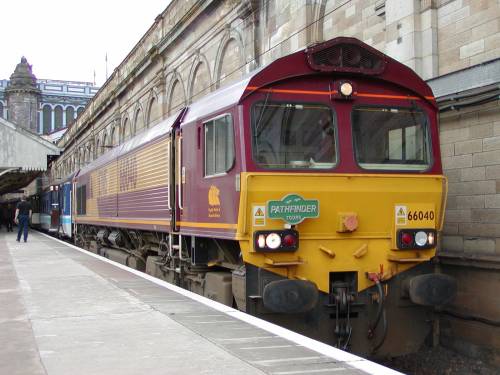 66040 at the Edinburgh Waverley end of the "Forth Porter" mini-tour.

Q. When does a "day" railtour become an "overnight" railtour?
A. When Railtrack get hold of it to time it!

This tour began as "day" out (albeit a very long one) to Scotland with an add-on "mini-tour" covering freight lines in the Edinburgh area. When first advertised it was really just a long day out with timings from my chosen pick-up station, Barnt Green, of 03.25/20.35 so at least an early night would enable some rest/sleep to be had before setting off for the tour. Then, a few weeks before the tour the news came through that two branches had been chopped from the mini-tour and the train was now also running about 90 minutes earlier on the outward leg! It finally became a "true" overnight for me when I was told that, owing to the fact the train was "load 15" (when was the last time you travelled on such a long train in the UK?), it was booked to be "banked" up the Lickey. Having never experienced a banker on the Lickey, and it being quoted as 60066 which I required, a move to Cheltenham Spa was suddenly somewhat essential!

23.45 : picked up by another colleague in his car and taken to Cheltenham Spa.

...and so we were "in position" for covering the banking engine.

Gen received earlier in the day suggested our spoon was to be 47749 (well dud for me) but I was pleased when it arrived (00.44, yawn!) to find it was in fact 47736, a required haulage for me. We were in coach A, the rearmost of the 15 coaches in the formation. Coach A was unusual in itself, being a mark 2a. Although not in the best internal condition, we approved of the choice as you can get a better nights doss in a mark 2 than a mark 1.

Being in the rearmost coach meant we had a good vantage point to view the banking operation. We stopped adjacent to Bromsgrove station and the 60 (never did see its number, I'm trusting others who confirmed it was 60052!) ran out of a siding alongside and buffered up to us. As soon as it did we set off. The 60 powered hard all the way to a few chains before the summit when power was backed off and the 60 quickly dropped away behind us, banking successful as we topped the summit much faster than I'm normally used to.

Time now to settle down for the night, though with further colleagues joining our group at New Street and Crewe, and a loco change booked at the latter (0308 - 03.28) it was hardly going to be a good night kip!

I wandered up to the front at Crewe and watched 92034 backing on to the train, atop 47736 which (thankfully) was left running to provide train heating. I managed a reasonable amount of sleep (!), only coming truly back into the land of the living around Carlisle at around 6am. The run to Edinburgh was pleasant as it was a very nice morning - bright and sunny.

We had about two and a half hours to explore Edinburgh before the mini-tour. In my case I was on the look-out for 170422, my last Scotrail Turbostar DMU required for sight. No sooner had I arrived than a colleague rang me to say it was rolling in to one of the bay platforms. Over I went to see it and another (sub) class was duly completed. I resisted the urge (not difficult) to join some of my colleagues bashing units out to Haymarket and back - I last did that in the early 80's when it was 26's, 27's & 47's that could be scored in the 1m 19ch bus-stop move! I did however view a handful of the GNER services however on the off chance my last 91 (91025) for haulage appeared, but alas it didn't.

9.10am - rolled up at the BHS in Princess Street to find a mega-large queue in the restaurant! Looks like it was a popular choice for breakfast, when I arrived there was probably upwards of 50 people in the queue!! Give them credit, they drummed up a few extra staff members and coped really well with the rush. The 8-item breakfast at £2.10 went down very well.

Wandered back over to Waverley to see our train arrive. Locos now were 66040 and 66117...another two winners so I'd managed 5 out of 5 so far today! The mini-tour was a shadow of what was originally advertised - the branches of Cockenzie (required by me) and Powderhall (not required) being casualties at the pre-tour planning stage. At least we would cover both sides of the "Y" layout in Leith Docks....

....After staggering round the "Edinburgh Suburban" - little changed since I last traversed it a mere fortnight before - we headed up to Leith Docks. As we pulled in to Leith South Yard I noticed a train in on the other side being loaded with pipes. Hmm, room for us too?

No! Apparently, according to the PA announcement, EWS hadn't completed the paperwork so our passage on to the other leg of the "Y" wasn't going to happen! Never mind....we've asked for the tour to proceed early so you'll get more time back in Edinburgh! Hmm, not quite what we'd paid our money for....and we'd just had loads of time in Edinburgh anyway...

After staggering back round the "suburban" again then reversing at Newbridge junction we arrived back into Waverley 32 minutes early. I'd reached the "I need a bit more sleep" part of the day so used the time to view the goings-on around the station and make sure I was "in position" to cover if 91025 were to appear heading for Glasgow....it didn't.

No sign of our locos for the journey home...a points failure at Midcalder junction being the culprit. Eventually the locos turned up (92024 & 47736 I'm told, being at the rear of the train I never actually made it to the front to see for myself). So, a full house today - I needed 92024 making it six out of six...some compensation I guess for the lack of winning track....

Departure was almost half an hour down but good running/slack timings dragged that back and we were on-time by Preston and early into Crewe. We lost the 92 here for 47736 to power us homeward. En-route the only things of note were the sighting of a pair of Fragonset 31's at Carlisle taking over from 6233 "Duchess of Sutherland" which had failed and a "Pendolino" set (390001) stabled in the sidings at Tebay.

The usual Birmingham area compulsory stagger put paid to an early, or even on-time, arrival home. We pulled into Barnt Green 14 late. A rare event here - as we pulled in on the southbound platform 47782 pulled in to the other on a northbound railtour bound for the Liverpool area - when was the last time, if ever, that Barnt Green saw two railtours in at the same time?!?

Verdict : A good sociable day out, good too in terms of loco scratching. That said, the tour began (for me at least) as a track-scratching exercise so in that respect it was a disappointment with just one of the four advertised branches being traversed on the day.

All distances, in miles and chains (M & C), are taken from the timing sheet given out on the train. No attempt has been made to verify the mileages given. Mileages given for Leith in the tour brochure didn't include the second booked reversal...which we didn't do on the day anyway...