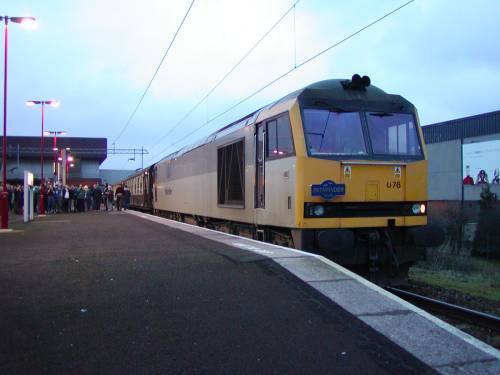 60076 at Birmingham International during an impromptu photo-stop. 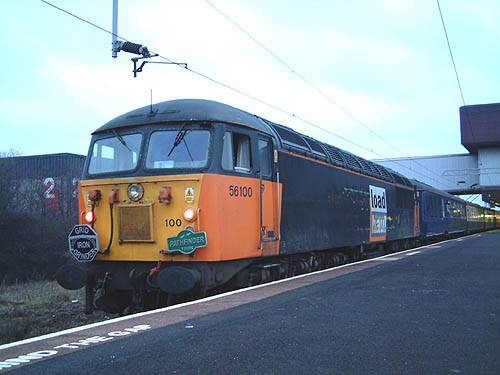 The tour I've waited many years for - the chance to traverse my local freight line in Northampton! I was also pleased to find the tour would travel down the line to Ironbridge power station in Shropshire as that was another freight branch I required. The Oxley Chord and Universal Abrasives Siding (siding being the operative word) at Stafford also being on the itinerary but I didn't need those, as was Kingsbury Yard - required, but somewhat "fringe".

When the tickets and timings arrived it was noted the "Grinder" bit of the tour name was now no longer valid as the reversal point was to be the up & down goods line at Stafford....at least I wasn't losing a required piece of track as I'd done that line before!

Advance gen (on the Tuesday evening no less!) suggested the tour locos were going to be 56100 and 58020, both winners for me. By Friday the gen was still firm...quite an unusual event as there are often changes in the days leading up to a tour running.

So, just how do you explain to anyone not into the hobby (friends, family, work colleagues) that you are heading for the Birmingham suburbs in order to catch a train....back to within a couple of miles of home..?

As my Father was tempted out for the novelty of doing the Brackmills branch at Northampton he agreed to be the driver and duly arrived to collect me at 07.30 on the Saturday morning. A foggy drive to Barnt Green and we were there in plenty of time (the train was late!) so a chance to socialise with others arriving there for it.

The sound of a grid working hard (up the Lickey) heralded the approach of 56100. Coach A was at the back - bad news for the grid-bashers but good news as this put us front down the Ironbridge and Brackmills branches. Usual stagger to The Black Hole, where 58020 was seen waiting for our arrival. Various Virgin Voyager units were seen too. The bone was appended to the rear of the train here and we set off again via Saltley and Water Orton to our first "red bit" of the day.

Although "Kingsbury Yard" sounded like nothing worth getting excited about (just a reversal point), in the event we actually ran to the current end of the line, of the former route to Baddesley Colliery. I understand the stop-board is located 60 chains from Kingsbury Branch Junction so it was worth doing (really!). On the way in and out we could view various decomposing hulks of shunters being disposed of by the Harry Needle Railway Company. Only one was numbered - 3309, though those in the know also suggested the two class 11's seen to be 12074 & 12098.

Back now from whence we'd come, though via Whitacre Junction. We were held just after Water Orton for a clear route onto the Sutton Park line, then we wandered our way to Walsall and Wolverhampton. At Darlaston Junction we were held to allow a "light engine" class 60 past. As booked, at Wolverhampton we pulled up in the up & down goods line for a few minutes "operational stop". Outside activity however soon confirmed this was not a simple stop as the 58 was uncoupled and left us. The light engine 60 we'd seen, 60076, then backed on top our end of the train. I later heard there had been a problem with the TPWS equipment on 58020. No complaints, I was now scoring my third loco of the day!

We traversed the down goods line past Oxley depot and all too soon we were onto another "red bit" at Madeley Junction. In the run up to the tour there was some "confusion" over how far down this branch we would get - either to the Railtrack limit or to the Royal Albert Bridge. In the event our coach (the leading one) stopped exactly on the bridge, thus I assume the 60 had more or less reached the Railtrack limit, just beyond the bridge.

Back then to Oxley and a squeal round the Oxley Chord to Bushbury Junction. Residents of the local travellers site took the opportunity to bombard the train with whatever came to hand, but as far as I could tell no damage was done. Is it any wonder travellers aren't liked if that's how they choose to behave...?

At Stafford we reversed on the up & down goods line (nowadays that means stopping at the Royal Mail platform). No chance to alight however - the platform height is higher than at a "normal" station so the doors on a mark 1 coach can't be opened!

Normal "railtour routing" now - back to Bushbury Junction then through Birmingham by way of Bescot, Aston and Stechford. I was pleased to see 66208 at Bescot, one of the five EWS sheds I required for sight (just 029, 088, 228 & 236 to go now). We pulled up at Birmingham International for a crew change - but we were asked not to alight as this was only to be a very brief stop.

On now to my home town, Northampton and, for me at least, the days highlight - the run down the former Peterborough line. Now very much truncated, it goes about 2.5 miles and ends up in the Brackmills industrial estate. Unfortunately the last mile is now privately owned so we made it about 1.5 miles until we reached the "stop board" signifying the Railtrack limit. It was an enjoyable experience stopping the traffic as we crossed Bridge Street Level Crossing - I've been stuck there enough times waiting for a train to pass, so this time it was my turn to be on the train causing the delays! 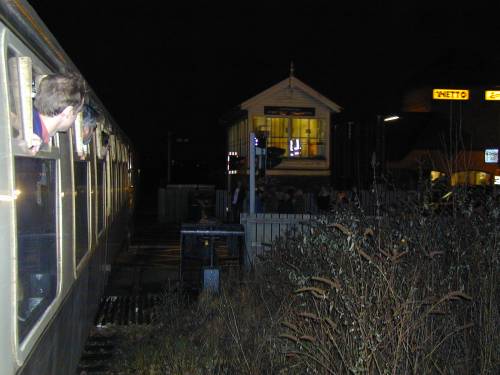 The two photos below (taken on Sunday 13th January) show where the train actually reached. Both were taken from the public footpath that crosses the railway at Hardingstone Junction (the point where the Bedford and Peterborough lines split). The first view, looking towards Northampton, shows where the train got to - 60076 stopped on the points that can be seen i.e. just a few yards short of the foot crossing. 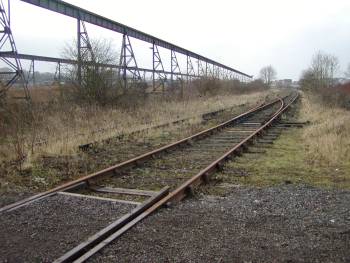 The second view is taken from the other side of the foot crossing and looking in the other direction. The stop board (Railtrack limit) can be seen. The board is about 1 chain beyond the foot crossing. The line then curves sharply left before curving right again and this is the former Bedford line, now going on about another mile into the Brackmills industrial estate. This view actually shows the former Hardingstone Junction and going straight on (now basically just undergrowth) on the right side of the photo is the former Peterborough line. This crossed the Bedford line about 1/4 mile further on then carried on to Wellingborough, Thrapston and Oundle ... ending up at Yarwell Mill, near Wansford, where it is of course still open today as the Nene Valley Railway. 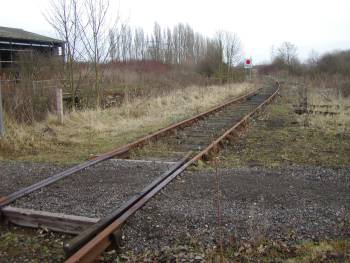 Anyway, back to the tour. We'd lost a bit more time and by the time we came back through Northampton station we were 22 minutes late (funny, earlier in the afternoon we'd been the same...but early!). I should also mention that on the approach to, and departure from, Northampton we used the up goods line and down goods loop respectively, so some more rare track for the desperados on the train.

From Rugby particularly the run back to Birmingham was a real stagger. We were routed via the down goods line on the approach to Rugby station and we ran past the platforms just as 90046 rolled in on a Virgin service to Manchester. Surprisingly we were allowed to go first. At Coventry however we passed through platform 4 and were stopped just past the station...to wait the passage of 90046, another buzz-box hauled Virgin service and a Virgin tram! This took us to over 40 minutes late and we eventually rolled into The Black Hole the same down. At least a fairly swift move getting rid of 60076 clawed back some time, nonetheless we reached Barnt Green 20 minutes behind plan. We baled here and walked to our cars hearing 56100 screaming away into the night.

All in all a good tour - scoring three locos on a tour only booked for two was excellent and we effectively covered three branches - the former Baddesley Colliery line at Kingsbury, Ironbridge and Brackmills.

Oh, and I did enjoy seeing the traffic queue at Bridge Street Crossing!

...and this from Melvin Teale, covering the bit between Swindon and Barnt Green (and return);

OUTWARD LEG
A cold and damp morning found me shivering on Swindon station at 06.45 awaiting the arrival of the tour. 56 100 and then 56 102 had been quoted for the tour. Finally the gen was settled with no. 100.

06.55- Hmmm... still awaiting the arrival of a tram for Bristol from the Cheltenham line into Platform 1 & Platform 3 held a tram awaiting departure for Worcester. (TC failure on the Gloucester line)

The route was via Bath, Dr Days and Cheltenham. This was fairly uneventful. Except for the fact that we continued to lose time due to the fairly common phenomena known as "railtour stagger". 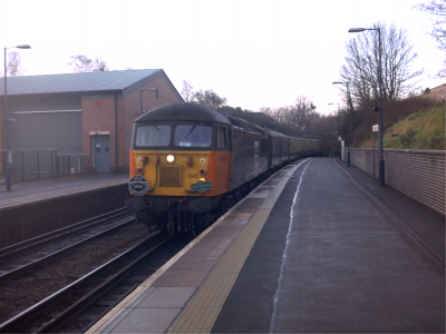 However the ascent of the Lickey was commendable, and before I knew it we were arriving at Barnt Green.

RETURN LEG
After some sustained late running as reported by Gary, we had recovered to the extent that we left Barnt Green only 20 late. We fairly stormed down the Lickey with brake applications required to ensure that we kept within the maximum speed limit allowed. This was probably the fastest we'd gone all day! Rattled past the outskirts of Gloucester and then into Cheltenham. A fine start from Cheltenham and we were on our way.........until. A few miles north of Charfield there was an emergency brake application and we came to a "grinding" (good eh?) halt. Looking out of the window revealed a green signal which we had passed by 3 coaches. The driver alighted and inspected the bogies of the grid with his torch. A couple of minutes later we were off again, but stopped at the next signal where something was reported to Gloucester box. I can only assume (but don't know for sure) that the driver thought we had struck something. (Webmasters note : correct - the driver had hit something, possibly a supermarket trolley or ballast. The stop was indeed to check for any damage). Off we went and the remaining journey to Swindon passed uneventfully, except for noting a top & tail class 60 freight at Bath! We arrived back exactly 15 minutes late, tired but happy after a good day out!

Postscript- The next day I was making a journey into Swindon, and what should I see in Cocklebury yard at 15.00? Yes, 56 100 running round the stock of our ecs! (And I saw 56100 plus the ecs passing through Birmingham New Street at about 5pm!! Webmaster)