Time once again for Pathfinders annual Christmas "spinner"  - this year a run down to and round the London suburbs. Pleasing for me as there were a grand total of four pieces of track that I stood to score during the day.

Erm, three pieces of track....the tickets arrived on the Thursday with information that High Meads Junction to Temple Mills East Junction was off because of Channel Tunnel high speed link work. Oh well...

My day started at 6am, up and ready for the arrival of a colleague from foreign parts, or at least Stevenage! Stuart lived up to his quote that he was an ace navigator and arrived at me pretty well bang on time and we were soon on our way to Sandwell & Dudley to pick up the tour. Why such an unusual location to join? To get all the locos involved joining before Nuneaton (the logical place for me), Birmingham...no thanks, so S&D it was!

A few minutes before time we wandered up to the platform - to a cry of anguish from Stuart as one of his last two class 87's he needed for haulage, 027, was stood on a train at the other platform! Just before our train arrived large-logo 47847 shot through on a northbound VXC service. 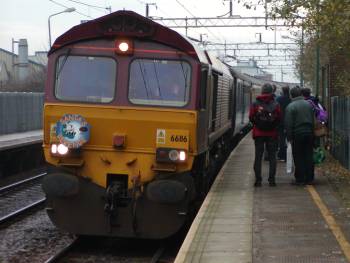 66116 duly appeared and we boarded coach A, the second coach in the formation behind the generator/staff vehicle (17105 - ex-Royal Train staff couchette coach 2905). Next stop was Birmingham New street where there was time to get a photo of the 66 and catch up with news/rumours from those joining there. A couple of Voyagers appeared and departed before we did - not something I'm that used to seeing just yet.

Everyone off at Nuneaton to witness the hand-over from 66116 to 56087 "ABP Port of Hull". A few track maintenance trains about and not much else as the Trent Valley route was closed for engineering works. 60100 was one of the locos noted working the engineers trains. 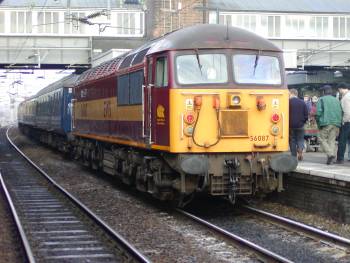 From Nuneaton we headed for Leicester, but only as far as Glen Parva junction at which point we turned south onto the Midland Main Line. We kept on southwards as far as Cricklewood where we turned into the up goods loop in order to add 60075 onto the rear of the train. A good choice, 60075 was one of the last (or possibly the last) class 60 that has never worked a passenger train!

I began to perk up here as our route now took us over two pieces of track I required - Carlton Road junction to Junction Road junction and the Harringay curve. With both bits done (a beer was opened to celebrate) we were now heading north on the East Coast Main Line....but only as far as Alexandra Palace where we branched off onto the Hertford loop. At the first station, Bowes Park, we ran into the reversing siding where we said good bye to 56087. As we passed Bounds Green depot on the way in 89001 was noted on shed.

60075 was in charge to Liverpool Street - we made it there via Finsbury Park, Canonbury, Dalston, London Fields and Bethnal Green. A well-early arrival gave more time to spend in and around the station...in my case a bite to eat followed by a short snooze! 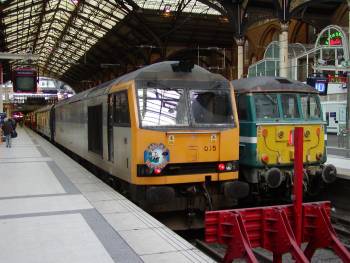 A step back in time now with one of Freightliners class 47's in charge - 47197 to be precise. Our fourth loco of the day and my fourth winner too. From Liverpool Street we headed westwards, though to achieve this meant first heading eastwards via Stratford then north via Temple Mills and finally turning east at Tottenham South junction. Some of the track we traversed was quite rare, but I'd done it all before on service trains. For some on board (mentioning no names Miggy) today actually gave an opportunity to score passenger track!!

At Harringay Park junction we were back on the route we'd travelled over in the opposite direction a few hours earlier. We re-traced our steps as far as West Hampstead where we turned off onto the "down Hendon" which got us to the curve at Cricklewood onto the line to Acton. The usual stagger ensued along this route and, per normal, we were held on the approach to Acton Main Line whilst the GW decided what to do with us.

As booked we then ran into the down goods line and, between Acton Main Line and Acton West we stopped for our next loco change. 58029, my only dud loco for the day, was waiting to take over. At this stage I should mention that timekeeping all day had been very good - we had been within a few minutes of time, mostly early, all day. Our departure from Acton was just a handful of minutes late but as we headed north we caught that back (eventually). A brief unscheduled pause at Ealing Broadway didn't delay us much then we traced our way via Greenford onto the Chiltern line.

58029 wasn't particularly challenged as we wandered our way towards Banbury and we kept just a couple of minutes shy of right time. A stop was made at Banbury for a crew change. On the approach to Leamington Spa an announcement as made to ask people to pause to remember Jonathan Stacey, a Pathfinder regular who had suffered a heart attack and died a week or so earlier whilst waiting for a Pathfinder train at Worcester. A nice touch.

After Leamington Spa we headed for Coventry and a booked set-down for passengers. We'd been back "into credit" with the times after Leamington Spa but Coventry panel wiped that out after we waited 10 minutes for access to the station! At Coventry a certain person from another railtour operator, Mercia Charters, was seen joining - no doubt scratching in another required class 58. An enquiry revealed he'd also needed the 56, but had over-dossed in the morning and missed it. Funny, isn't that the third or fourth grid you've managed to miss this year Denzil....?

Onwards then to Nuneaton via Bedworth, passing a Freightliner 66 (603 someone said) as we approached Nuneaton. Last loco change here - 58029 passing control over to 66072 - loco number six of the day and my fifth required one. 66072 was also to be my 30th 66 for haulage (not that I'm particularly proud of that fact - I merely mention it out of interest!).

A fairly unexciting trundle back to Sandwell & Dudley for us and here we said good bye to those of our group who were on to Crewe.

Verdict : as always, the Pathfinder Christmas "spinner" provided a good mix of locos, track and general entertainment as most everyone in my group of regular railtour travellers had turned out for it.

Just one more tour left in 2001 for me - Hertfordshire's "Lune Ranger" on December 29th.