Notes :
(1) Wrongly routed onto the Camp Hill line, stopped about a quarter of a mile further on, set back past the signal and carried on towards Nuneaton.
(2) 56099 on rear.
(3) 60014 on rear.
(4) Wrongly routed (again!) into the down goods loop at Leicester.  At this point the train was were early, but following the complicated shunt involved to get it to the platform it finally left about 50 minutes down.

Source : Jonathan Wilcox
(Joined the train at Wolverhampton/left at Birmingham New Street on the return) 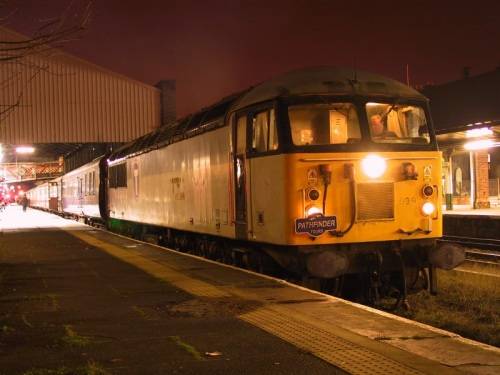 I'd been looking forward to this tour for quite a long time as it involved lots of grid miles (which was nice) and even a Class 60 in the Cleethorpes area, which was bound to be required as I'd only had seven of them!

In the morning, we did 87006 from New St to Wolverhampton on the 0630 off Euston, and then waited for the tour.  During this wait, we were greeted with the gen that 66159 was working some CrossCountry service.  But I wasn't worried about that, I was just looking forward to getting 56099 in the book! I think it took us something like 45 minutes to do the 12.9 miles between Wolverhampton and New St - lots of staggering and not much thrash.

However, this was to change after leaving New St, where my dad left (he was only doing a short leap anyway, just to have the grid), obviously the prospect of mega thrash behind 66159 was too appealing because a lot of people joined him in going to International for it (!).

Farce no. 1 (where have we heard that before) - we took the wrong road at Proof House Jn and soon ground to a halt.  I didn't actually realise what had happened - I'm lost around that area since the remodelling! However, after a swift set back manouevre we were off again, this time down the right route!

The wasn't much of note for the rest of the journey, except 56085 was viewed at Daw Mill and 66250 and 57005 at Nuneaton.  The grid was screaming very nicely all day, not least down the Midland Main Line!  Things got quite boring after that, all we saw was units and...not much else.  The constant screaming from the grid kept me from falling asleep :-)

It was a nice run up from Lincoln, and especially from Barnetby into Cleethorpes.  I had actually only been into Cleethorpes once before, and that was with 56039 and 47739 top and tailing Pathfinder's Hymn 'n' Ham tour in (I think) 1995.  That tour also went to Killingholme, so I was hoping, but not expecting, to get past New Inn level crossing where we got to last time.

There was enough time in Cleethorpes to get some fish and chips and go and phot the 60.  At least it was required - 60014 "Alexander Fleming" was one of only two left in Petroleum livery.  We left bang on time at 1515 and headed for Killingholme.  I think it was at Lindsey where we saw 66526, 601 and 605, but I might be wrong because I don't exactly know my way round that well up there.  I'm pleased to say that we did actually get past New Inn, and I think (but I'm not sure) that we nearly got all the way.

The thrash leaving the Immingham area was very entertaining, and we passed one of the two Coal liveried grids still left (I'm pretty sure it was 56134, but it could have been 56104 - I don't know if that's been reinstated yet.

We passed another just after leaving Barnetby, and we then enjoyed possibly the best thrash of the day - with sub-zero temperatures outside, a grid screaming very well on the front and it being almost pitch black outside, it just made my day.

Things got even better at Leicester though.  Farce no. 2 (here we go again). We're booked to stop here because it's a set down point.  Ummm...no!  We pulled into the goods loop and waited.  And waited.  And waited.  And then we were told what I'd already thought and hoped would happen - something off the shed would drag us back out onto the main line for the tour to carry on towards Nuneaton.  On the shed at that time were 66186, 66222 and a 60. Personally I'd have preferred the 60, but as all three were required, I wasn't too bothered.  However, seconds after the announcement that the assisting loco would have pulled us back out towards Nottingham, we left - towards Nuneaton.  About half a mile further on, we stopped, and 10 to 15 minutes later, 66222 hauled us back towards the station.  We expected that it would just take us into the station, and then the grid take us back out (because we were now at least 40 late).  No.  The shed took us round the back of the station (through the same goods loop as we'd just been in), until we finally stopped about one and a quarter miles north of the station. The grid had been assisting the GM throughout that short run!  Then we carried on the direction we should have been heading, and stopped in the station.  For about 10 minutes!  We finally left at least 50 down, and it stayed that way until I leapt at a cold and misty New St, and as the grid powered away into the tunnel, I thought what a great tour it had been.

After the exertions of Friday, I awoke at 0800 Saturday morning (after just 4 hours kip) for the next tour.  After coming to my senses I decided to do the tour from Lincoln, and although miss out of lots of grid miles, and thrash, I kept my sanity and some money!!!

My lovely sense of humour had some Pensioner laughing and once we got to Barnetby, we awaited our next train with anticipation.  Our next train arrived with 156407 (not required) and was full and standing.  Ouch!!!!  We squeezed in to a little spot, and just stood all the way to Market Rasen, where people were told there was no room on the train for any more people.  Now hold on.  Every year is the Lincoln Market, so surely Central Trains knew what the situation would be like??  I know in this day and age the rolling stock situation is not as in BR days, but its not good PR for them though is it?

So, with this 156 we arrived at Lincoln Central to find Christmas carollers, and also tickets checked.  Ah, as the guard didn’t come down the train, we had no way of getting a ticket, and so I had to buy one at the station.  And the cheek of it, they wanted my outward portion!  Blimey!

So, with the Christmas market, we decided to wander around Lincoln, seeing the sights and sounds, and also my old haunts of the University.  We had lunch at Pizza hut, got back to the station, and saw numerous fellow enthusiasts and fellow friends.  56099 arrived and we boarded.

At 1258 my 2nd grid in two days, we left Lincoln up towards Barnetby and through the hideous footbridge, and through Grimsby Town giving the locals the abuse they deserve (as they come from Grimsby!), and arrived at Cleethorpes at 1358 with 60014 sat in the sidings waiting to come on to our train.

Well the last time I came to Cleethorpes (April 28th:  The Napier Neptune) we got here in bright sunshine, and the clouds became overcast, and it rained!  But this time the weather wasn’t too bad, and so we wandered, got some chips, ice cream and just chilled out.

We managed to find a spot to take a photo of the 60, may be not legitimate! And went back to the station to find Pat Rear from the Cleethorpes trolley brigade wondering what was going on.  Hmm.  And it has to be said, she has failed to get any money out of my pockets every time I have come across her!!!!

We departed at 1515 with 60014 and past through Grimsby Town (the best way if you ask me), to Habrough, Ulceby, Humber Road Junction, Immingham West, and down the branch to Killingholme.  The last time I went down to Killingholme branch was on the Hertfordshire tour in 2000, but this time we went further and the loco stopped near the Junction from the Freight terminal to the branch (Yorkshire Tar Level Crossing), thus covering a Level Crossing, with a lorry getting stuck while we reversed!!!  Excellent.  Well it was a German lorry.  But don’t mention the war.  So well worth doing the journey!

We departed Killingholme at 1615, Immingham West, and passed some Freightliner 66s at Humber Oil Refinery.  Also 56134 was seen on a coal train.  We, passed through Barnetby at 1658 (8 late), and went down to Holton Le Moor (8 late), Langworth (1 late) and arrived at Lincoln Central at 1734.  However, during the last leg, someone said to another friend, “Well PRAR he’s got nothing on us today for his report”.  I think he spoke too soon.

We walked down to Lincoln High Street Level crossing in order to await the departure of the grid to Crewe.  We got down there, near the front, and stood and waited.  Once the grid had screamed out of Lincoln, the barriers started to go up, and I walked through, but then the barriers stopped, and hit someone on the top of the head, causing groans from some people behind us.  Hmmm.  It always happens to him.  Who remembers where he was laughing at someone’s misfortune at Bournemouth on the Dorset Ooser (but he’d broken his arm falling down the stairs at his home).  Doh!

So, after that little incident, we did some more walking through Lincoln looking at the sights and sounds of the fabulous city, before we caught the 1825 back to Barnetby.  But, it was a 2 car 158 and lots of people tried getting on, and we got a seat in the vestibule, which was good.  And it was a required 158857!!!!!

We got back to Barnetby and did the pub, along with a fellow passenger who was heading back to Brigg.  The beer was good, before we went back to the station to get our train (158766) back to Scunthorpe. Well after getting back to Scunthorpe at 8pm, it was time to call it a day.  After very little sleep I decided the best place for me was bed!!!!

I found out later, that 66222 was also used on the Chingfinder tour due to the fact the train was routed incorrectly at Leicester!  Marvellous.

Verdict:  A great weekend for Class 56 cranks with nearly 1,000 miles available.  Another nice little mini tour, for which Pathfinder has got to know well.  They go down well, with the cheap fares, and the good locos.

So, a great weekend was had, well done again to everyone!!!!!  Next tour:  Santas Revenge.

All distances, in miles and chains (M & C), are taken from the timing sheet given out on the train. No attempt has been made to verify the mileages given. PRAR reports that "The brochure mileages for this tour are 22 chains short at Killingholme.  Pathfinder actually got further up the branch than Hertfordshire Railtours did".